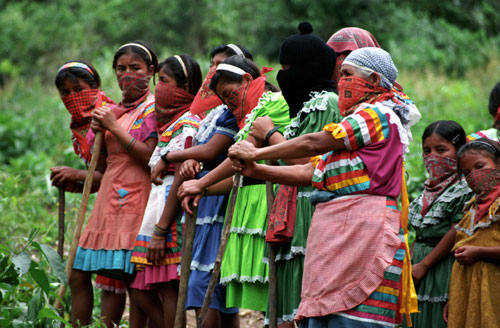 Photo by Timo Russo
Support our journalism. Become a Patron!

Winnemem Bringing Salmon Home to McCloud River – Winnemem Wintu tribal members have embarked on an unusual and historic journey in an effort to bring Chinook salmon back to the McCloud River.

Alaska Natives win battle against Red Dog, world’s largest zinc mine – Alaska Natives living in two villages have won a battle against the world’s largest zinc mine over a permit they said would have polluted an important fish stream that provides food and drinking water. The mine has repeatedly topped the EPA’s Toxics Release Inventory list, an annual compilation of toxic chemicals released by all industries in the U.S.

Guatemala must suspend mining operations on Mayan territory – Several Mayan communities and organizations have presented a Constitutional Petition to the government of Guatemala, calling for the immediate suspension of all mining activities taking place on Mayan land–including Goldcorp’s Marlin Mine and HudBay Mineral’s Fenix project.

Chinese project brought to a grinding halt in PNG – Indigenous landowners described as “ignorant” by lawyers acting for the Chinese Ramu nickel mine have pulled off an enormous victory by securing a temporary court injunction to stop work on the mine’s submarine tailings disposal system.

Malaysian indigenous tribes protest land changes – Hundreds of indigenous tribal Malaysians staged a rare protest outside the prime minister’s office Wednesday to denounce potential changes to a law that they fear will rob them of land.

Protect the Glen Cove Sacred Burial Site! – Yet another sacred site is facing destruction in the United States. The Greater Vallejo Recreation District (GVRD) and the City of Vallejo want to convert the Glen Cove Shellmound site in Vallejo, California, into a community park with its own trail, picnic tables, restroom facilities and parking lot. The 15-acre Shellmound site, known to the Ohlone Peoples as “Sogorea Te” is the final resting place for thousands of Indigenous People dating back at least 3,500 years.

Brazilian Federal Police raids Native village and abducts Chief Babau – At around two o’clock in the morning on March 10th a group of unidentified armed people entered the Tupinambá Native American Village Serra do Padeiro in the South of the Brazilian state of Bahia and brutalized, threatened with murder, drugged and abducted the local Chief Babau.

Mexico: The Lacandona Rainforest is being cleared of its People – The Mexican government is moving ahead with an “ambitious new plan” to surround the Lacandona Forest in Chiapas, Mexico, with oil palm plantations; while disguising the forest around the plantations with various eco-tourism sites. In preparing for the two-faced project, the government—still in line with the old ambitious plan—with the help of various corporations, is clearing the Rainforest of its Indigenous People.

Legal blow for controversial Andaman tourist resort – Weeks after the last member of the Bo tribe died on the Andaman Islands, an Indian court has moved to protect the neighbouring Jarawa tribe by suspending the operation of a controversial tourist resort. India’s Supreme Court ordered on Monday that the company, Barefoot India, must close its resort near the Jarawa’s reserve, pending further deliberation by the court.

PERU: Suspension of Mining Operation Merely a Placebo – Although the Peruvian government reported that it had suspended the exploration activities of the Afrodita mining company in the country’s northern Amazon jungle region to avoid further protests by local indigenous people, officials took no actual steps to bring the firm’s work to a halt.

Indigenous Peoples of Guyana Demand Action on Land Rights, Consent Issues – Toshaos, Village leaders, regional leaders, district leaders, community leaders, and APA Executive members are demanding action from the Government of Guyana and the international community to advance the land rights of indigenous peoples and ensure that the principle of free, prior and informed consent (FPIC) is respected.

Malaysia: Pressure mounts on Sarawak natives – Sarawak is again in the news as the relentless pressure on the ‘native peoples’ intensifies. Logging operations continue to push into the Dayak peoples’ ancestral territories, extending deep into the lands of the Penan people, up into the Kelabit highlands and right up to the sources of the Rajang river. Logging tracks even extend over the border into Indonesia. Meanwhile on the coast and in the lower-lying parts of the State, extensive tracts of Dayak land are being converted to oil palm plantations.

Halalt First Nation holds blockade for the water – For more than a week, members of the Halalt First Nation, near the southeastern coast of Vancouver Island in British Columbia, have held onto a “protective blockade” in defense of the Chemainus River. The blockade officially came to an end on March 11.

Colombia signs accord with Indigenous People – In late 2009, Indigenous families began occupying police stations in Colombia, to demand negotiations with the government and bring an end to ongoing military and paramilitary harassment. The mobilization involved more than 6,000 families. Fortunately, after 63 days, the government agreed to sign a 45-point accord with the families.

Sioux Tribe settles tax debt with IRS, buys back land – The Crow Creek Sioux Tribe has settled its tax debt with the IRS and lined up a loan that will enable it to buy back the 11 square miles of land the IRS sold at auction in December, the tribal chairman said. A stipulation filed in court last week indicates the tribe will dismiss its lawsuit, which sought to prevent the IRS from selling the Hyde County land. That will cancel a May 4 trial.

Australia Gov’t Pushing Ahead with Nuclear Dump on Indigenous Land – As long expected, the Rudd government has decided to push ahead with their plan to build a nuclear waste dump site on Warlmanpa land.

Wet’suwe’ten Blockade Against Logging – The Vancouver Media Co-op interviews Richard Sam, a member of the Wet’suwe’ten Nation and one of two people maintaining a road blockade against the Canadian logging company Canfor in central British Columbia

Amazonia For Sale – 35 minutes in length, Amazonia for Sale tells the story of the Awajun Peoples, who, like so many other Indigenous Peoples around the world, are struggling to preserve their land, protect their way of life, and defend their dignity and rights in the Peruvian Amazon.

Hope and Terror in the land of the Jumma – An eerie calm has returned to the Chittagong Hill Tracts of Bangladesh, where the military recently opened fire on the Indigenous Jumma People, killing 6 and injuring more than two dozen men, women and children. Sadly, painfully, it was not the first time the peaceful Jumma were put through such wretched violence, as we are reminded by this powerful clip from the documentary film, “Terrified voices.”