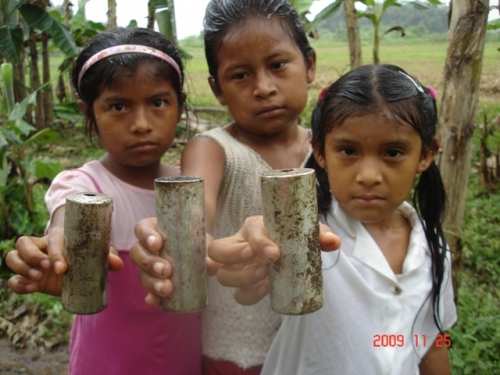 Feb 28 – Indigenous People in Ecuador Call for “Permanent Mobilization” – Indigenous representatives and leaders have issued a call for a “permanent mobilization” to protest the Ecuadorian government’s development policies and press demands for a pluri-national state. Lasting for more than eight weeks, a similar mobilization occurred last year in Peru.

Feb 26 – Colombia: indigenous communities targeted in war—again – Indigenous peoples are again caught in the middle as the Colombian army launches a major offensive against the FARC guerillas in the southern Andean department of Cauca.

Feb 26 – Day of Action for Rivers, March 14, 2010 – With the “day of action for rivers” set to begin on March 14, international Rivers provides an update on what will be happening. So far, they say, twenty-three actions have been scheduled in fourteen countries. Several more actions are expected.

Feb 26 – Alaska Natives restoring culture outlawed by missionaries – After years of stigma brought on by Quaker missionaries who banned traditional dancing, the remote Alaskan village of Noorvik is resurrecting the old dances and songs—re-awakening was was shamefully oppressed by religious bigotry.

Feb 26 – Yanomami fear for their lives as miners invade their land – Yanomami shaman and spokesman Davi Kopenawa has made an urgent appeal for support as the Yanomami territory in northern Brazil is being invaded by gold-miners. Davi said, ‘The arrival of miners is increasing, and the Yanomami are very worried… Soon there will be conflicts between the miners and the Yanomami…

Feb 26 – Peru: indigenous organizations demand protection for “isolated peoples” – Representatives of Peru’s Amazonian indigenous alliance AIDESEP and affiliated groups are calling for the “protection of indigenous peoples in voluntary isolation and initial contact.” On Feb. 4, President Alan García introduced a bill that would allow the forcible removal of local populations from lands slated for development projects found to be in the “public interest.”

Feb 24 – Olympics can’t mask country’s human rights record on indigenous peoples – Ever sensitive about their reputation as a land of the fair minded, Canada’s Olympic planners have gone to lengths to showcase the nation’s respect for aboriginals. However, it is little more than a blanket to cover up the true state of indigenous peoples in Canada.

Feb 23 – Urge Kenya to Withdrawal Police from Samburu Land – Cultural Survival is appealing to Kenyan government authorities to halt police operations in Northern Kenya, where Indigenous Samburu villages have suffered brutal police attacks over the last year. In the most recent attack, the police invaded two Samburu villages, raped eight women, burned a house to the ground, and beat women, children and men with sticks..

Feb 23 – Okanagan Nation launches blockade against logging – The Okanagan Indian Band (OIB) launched a “protective blockade” this morning, February 23, at the Okanagan campsite near Bouleau Lake in southern British Colombia. A member of the greater Okanagan Nation, the OIB say they have been left with no choice but to stop the logging company Tolko Industries from endangering their water supply.

Feb 23 – Uranium Mining Begins Near Grand Canyon – In defiance of legal challenges and a U.S. Government moratorium, Canadian company Denison Mines has started mining uranium on the north rim of the Grand Canyon. According to the Arizona Daily Sun the mine has been operating since December 2009.

Feb 22 – Indigenous Jumma massacred in Bangladesh – Eight people are dead and more than two dozen have been injured after the Bangladesh military, on Feb. 20, 2010, opened fire on a group of Indigenous Jumma villagers in the Chittagong Hill Tracts (CHT) of Bangladesh. Four villages sponsored by the United Nations were also burned to the ground.

Feb 20 – Company activities suspended in Ajwun and Wampis sacred territory – Peru’s Ministry of Energy and Mines announced this week that it is “indefinitely suspending” Minera Afrodita’s exploration activities in the Cordillera del Condor region of Peru. As reported by Servindi, the announcement follows a recommendation by OSINERGIN, which recently that found that Afrodita, a subsidiary of the Vancouver-based company Dorato , has no concession rights in the Cordillera del Condor region.

Feb 15 – Join the Campaign in Defense of the Xingu River – A letter-writing campaign has been launched to demand President Luiz Inacio Lula Da Silva and other Brazilian authorities put an end to the controversial Belo Monte hydro-electric dam. Once completed, the Belo Monte dam would devastate a massive portion of the Amazon rainforest, divert the flow of the Xingu River and destroy the livelihoods of more than 12,000 Indigenous people.

Feb 14 – Lusi volcano eruption blamed on mining firm – British scientists have revealed evidence that a mining company drilling for gas was responsible for unleashing a mud volcano in Indonesia which has killed 14 people and left tens of thousands homeless.

Feb 11 – Landmark Decision for Indigenous Land Rights in Africa – In a landmark decision this month, the African Union endorsed a 2009 ruling by the African Commission on Human and Peoples’ Rights which ordered the Kenyan government to restore the traditional land base of the Endorois People.

Feb 4 – Court rules in favor of indigenous Papuans – The Constitutional Court in Papua has issued an important ruling to provide better representation of Indigenous Peoples in the local government. The Papuan Legislative Council must now appoint 11 new members, all indigenous.

Feb 4 – Extinct: Andaman tribe’s extermination complete as last member dies – The last member of a unique tribe has died on India’s Andaman Islands. Boa Sr, who died last week aged around 85, was the last speaker of ‘Bo’, one of the ten Great Andamanese languages. The Bo are thought to have lived in the Andaman Islands for as much as 65,000 years.

Feb 2 – Bitter Sweet or Toxic? Indigenous people, diabetes and the burden of pollution – Diabetes is now widely regarded as the 21st century epidemic. With some 284 million people currently diagnosed with the disease, it’s certainly no exaggeration—least of all for Indigenous people.

Don’t mine us out of existence – UK-based mining company Vedanta Resources threatens the human rights of indigenous communities in the Indian state of Orissa.

Nuclear Attack on the Yakama Culture – Yakama Nation cultural leader Russell Jim talks about the Hanford Nuclear Reservation in south-central Washington and the social, cultural, economic, and political issues that surround it.