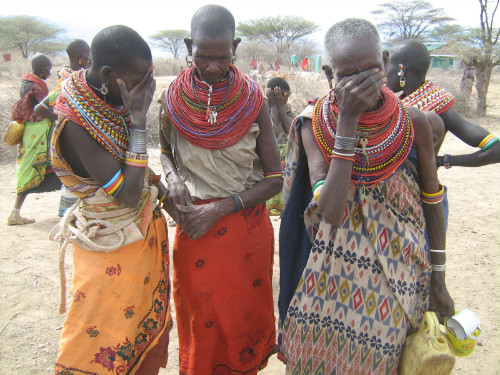 Nov 27 – Indigenous Mayans beaten, arrested for roadblock – More than 200 Indigenous Mayans were arrested this week for setting up a roadblock just south of Cancun, in the Mexican state of Quintana Roo. The entire group is now being handed over to federal prosecutors because, in Mexico, blocking a highway is considered to be a federal crime.

Nov 26 – Innu Strategic Alliance takes action and invades Parliament! – A large delegation of Innu Chiefs and Elders went to Ottawa to denounce the wrongful denial of their rights to their territories in Labrador (Newfoundland).

Return to Alcatraz: 40 Years of Resistance – With the sounds of the Miwok singers and the calling out of the names of the original occupiers of Alcatraz, American Indians ushered in a new era of resistance, remembering how the act of holding the rock became the bedrock of a new generation.

Nov 24 – Naso village demolished for the second time this year – As many as 300 troops from Panama’s National Police have once again demolished a Naso village in Bocas del Toro. No injuries have been reported, however, some 150 adults and 65 children have been left with no shelter and limited access to food and water.

Wake Up Call for Canada: End violence against Indigenous women! – According to Sisters in Spirit, over 520 Indigenous women and girls have gone missing or have been murdered, most within the last three decades. The Government of Canada has systematically failed to protect them.

Nov 22 – Paramilitaries Threaten Aida Quilcue and Social Organizations – A paramilitary group has threatened several individuals and social organizations in southwest Colombia for having, the group says, “a subversive discourse for the rights and ideologies of the narco-terrorists of FARC and ELN.” Among those named, Aida Quilcue, spokesperson for the Minga of Social and Communitarian Resistance. The CRIC was also named, along with the UN Development Programme in Narino.

Nov 21 – Citizens Protest Lack of Consultation about Canadian Mine in San Jose del Progresso – Inhabitants of San José del Pro­greso and others opposed to the Canadian owned mine “La Trini­dad”, have escalated their battle, occupying a town hall on November 18 with the goal of evicting from office the municipal president Oscar Venancio Martinez Rivera.

Nov 20 – Stop Killing and Starvation of Samburu People in Kenya! For the past 8 months, the Kenyan government has carried out a brutal campaign of violence against indigenous Samburu People in north-central Kenya, using their own police and military forces as well as government-funded mercenaries from Somalia. The campaign is ongoing.

SCO Demands Environmental Audit of Manitoba Hydro – First Nations in southern Manitoba are demanding Manitoba Hydro review its operations to stop damage they claim northern dams are causing to their communities. As many as 26 communities are affected by Hydro operations. (SCO Resolution)

Nov 17 – WANTED: Ray Hunt, in person, in the Amazon – The Yine, Machiguenga and Harakmbut communities, issued a statement this month demanding to speak ‘directly’ to Ray Hunt, CEO of the Texas-based company Hunt Oil. Last month the communities handed an eviction notice to the company.

Chile: Toward Reconstruction of the Mapuche Nation – Tired of waiting for the slow transfer of lands from the state and the always problematic recognition of their rights, dozens of Mapuche communities have begun to mobilize, a process that the Chilean government has responded to with extreme harshness.

Nov 16 – World indigenous leaders condemn Peru’s Amazon repression – The Peruvian government’s unprecedented attempt to destroy the country’s Amazon indigenous movement has been condemned by indigenous leaders around the world. The wave of condemnation comes after it was revealed that the government plans to disband Peru’s national organization for Amazonian indigenous peoples, the Inter-ethnic Association for the Development of the Peruvian Rainforest (AIDESEP).

Nov 15 – Indian and Northern Affairs Canada is no steward of the land – The Auditor General of Canada has singled out Indian and Northern Affairs Canada (INAC) for its abysmal role as a steward of Indigenous lands. According to Ms. Fraser, INAC has routinely failed to regulate environmental threats on reserves, leading to a “significant gap” when compared with the rest of Canada. “Significant gap—” the understatement of the century.

Canada seeks to unconstitutionally abolish Algonquin’s customary government – On October 30, 2009, Indian Affairs Minister Chuck Strahl sent notice to the Algonquins of Barriere Lake that he will not recognize their legitimate leadership, but instead impose elections on the community in April, 2010 by invoking a section of the Indian Act that would abolish the customary method they use to select their leaders.

Nov 5 – Indigenous Guarani occupy FUNAI headquarters – More than 50 Guarani occupied the headquarters of FUNAI, Brazil’s Federal Authority of Indigenous Affairs, in the southernmost state of Rio Grande do Sul. The move comes in response to FUNAI’s failure to publish a detailed report about the Gurani’s traditional lands, which they need to advance the demarcation process.

Sarawak: Police stand guard while Samling ploughs through Kenyah land – A group of police officers are guarding the workers of Samling Plantation Sdn. Bhd. while clearing works are being carried out using excavators inside the native customary land territory of the Kenyahs from Long Koyan for the purpose of establishing an oil palm plantation.

Nov 4 – Hawaiians Win Lawsuit Over Homelands – More than 2,700 Native Hawaiians have won a class-action lawsuit that accused the state Department of Hawaiian Home Lands of failing to meet its trust obligations. The suit alleged the state unfairly delayed leasing land to thousands of Native Hawaiians by making some wait decades for land.

Nov 1 – Tzotzils overtake UN office in Chiapas, Mexico – Some 150 indigenous farmers took over a UN office in the southeastern Mexican state of Chiapas to demand the release of three jailed leaders. The Tzotzil Indians, who also sought “refuge as internally displaced persons”, took this “desperate measure to attract attention and secure the release of three comrades,” the Emiliano Zapata Farmers’ Organization (OCEZ) said in a statement.

Growing Hope in Northern Manitoba Communities – “Food security exists when all people, at all times, have physical and economic access to sufficient, safe and nutritious food that meets their dietary needs and food preferences for an active and healthy life.”

Duta Palma’s Filthy Palm Oil – The Dayak village of Semunying Jaya, located in West Kalimantan, a province bordering the Malaysian state of Sarawak, has struggled for more than 20 years from successive companies destroying their customary lands.

Laguna Negra (English Subtitles) – Laguna Negra reveals a tough community desperately struggling to preserve their way of life in the face of powerful forces that wish to exploit the resources they live on.