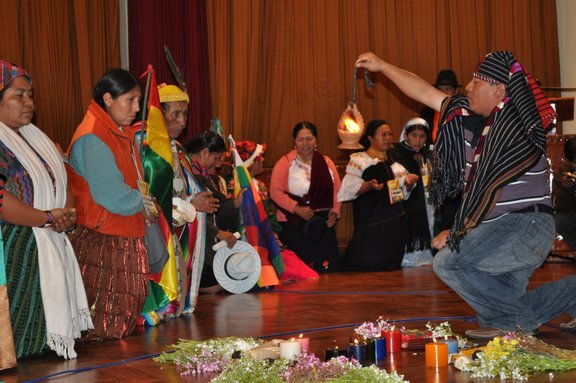 In this Month’s Underreported Struggles: 7,000 delegates gather in Peru for the IV Continental Indigenous Summit of Abya Yala; Hundreds of Tibetan villagers face off against armed police ; dozens of indigenous communities in Ecuador struggling after February oil spill; San Carlos Apache speak out against Land Exchange and proposed Copper mine

May 28 – San Carlos Apache opposed to land exchange and proposed copper mine – Apache Statement of opposition to the Southeast Arizona Land Exchange and the proposed Resolution Copper mine at Chich’il Bildagoteel.

May 28 – The Sweet Pepper War – In Peru two villages lost land when a Norwegian-registered agricultural company Camposol started cultivating sweet peppers. Camposol is one of Peru’s largest agricultural companies, with plantations all over the Latin-American country.

May 28 – Letters Needed, Stop liquor license renewal near Bear Butte! – On June 2nd at 3:00 pm the Meade County Commissioners will be meeting regarding the issuance of new liquor licenses, renewals and transfers for Sturgis Rally Venues. Please send an opposition letter asking them to deny the new licenses, transfers and renewals for all venues surrounding Bear Butte.

May 25 – Adivasis fighting against Nuclear Terror in Jharkhand – Thousands of indigenous people from Talsa village in northern Jharkhand, India, must now face the prospect of displacement—in addition to lung cancer, skin diseases and physical deformities as a result of a nearby open cast uranium mine, which has operated for decades.

May 24 – Standoff at Tibet Gold Mine: Tibetan Buddhists regard it as a sacred site – Hundreds of villagers in the Tibet Autonomous Region (TAR) of western China are facing off against armed security forces at the site of a planned gold mine on what the Tibetans consider a sacred mountain, witnesses say.

May 22 – Norway-based oil research in occupied Western Sahara – A French research fellow attached to the Norwegian Geological Survey (NGU) has been researching the geology of the occupied Western Sahara. The work is done in stark contrast to the Norwegian government’s own opinion that oil search in Western Sahara is “a particularly serious violation of fundamental ethical norms e.g. because it may strengthen Morocco’s sovereignty claims and thus contribute to undermining the UN peace process”.

May 22 – Indigenous Groups call for halt by foreign companies of land use without prior knowledge or consent – The Permanent Forum on Indigenous Issues continued its discussion of human rights today amid calls for Governments to strictly carry out their obligations under international human rights accords, notably in the Amazon where protests by native inhabitants recently erupted after moves to open the region to oil and mining by foreign companies without their consultation.

May 20 – Government renews assault on the Kgeikani Kweni (Kalahari Bushmen) – Botswana’s government sent trucks full of police and wildlife scouts into the Central Kalahari Game Reserve (CKGR) yesterday to confiscate goats from Bushmen who have returned to their ancestral homes.

May 18 – Villagers Fearful After Mine Water Discharged Into River – Water from a storage pond at Barrick Gold’s North Mara mine in Tanzania is seeping through containing walls, leading local villagers to fear their water sources are contaminated.

May 18 – Dongria Kondh shocked over mine approval – The government of India has given the British mining company Vendata resources final approval for the controversial bauxite mine on the Niyamgiri Mountain of Orissa, India. The Dongria Kondh were shocked to learn this on Friday, after receiving a phone call from the UK charity group ActionAid. It was the first time they heard of the decision.

May 15 – The Bhopal of West Africa – The similarities between Trafigura and Union Carbide (Dow Chemical) in Bhopal, are too stark to ignore: Both incidents happened in the dead of night, both were connected to the oil and gas industry, and most tellingly, both companies proclaim their own brand of innocence: Union Carbide through selling its shares to absolve them of any responsibility; and Trafigura through utter denial.

May 12 – Indian Activists Vow to Fight Northern Minn. Oil Pipeline – Some members of the Leech Lake Band of Ojibwe are working to prevent a planned oil pipeline from crossing their reservation in northern Minnesota. The pipeline would carry oil extracted from Canada’s oil sands, known widely as ‘the most destructive project on earth’.

May 9 – Indigenous People ignored one Month after oil spill in the Amazon – Ecuador’s second largest oil pipeline ruptured this past February, causing more than 14,000 gallons of crude oil to spill out onto the banks of the Santa Rosa river. The leak has been contained for a while now, and there are ongoing efforts to clean the oil. However, as many as 47 indigenous communities were effected by the spill, and their urgent pleas for assistance are being completely ignored.

May 3 – Villagers near Barrick Gold’s Porgera mine violently evicted by police – MORE than 300 houses belonging to local landowners near the Porgera gold mine in Enga Province, have been torched allegedly by policemen called out to restore law and order in the district. (related article)

Peru: Voicing the Concerns of the People – Over 10,000 people gathered on the streets of Lima, Peru last Wednesday, May 27, to support the ongoing Mobilization of Indigenous Peoples, which began exactly 52 days ago today. During the demonstration, an indigenous man took to the podium to voice the concerns of the People.

Cease! Fire! More Broken Promises, More Broken Lives – Cease! Fire! is a heart-wrenching and yet inspiring documentary film about the Indigenous Karen People of eastern Burma, and their continued struggle for peace and freedom on the land they know as “Kawthoolei,” which means, “the land of peace.”

Photo from the IV Continental Indigenous Summit of Abya Yala, by Marc Becker