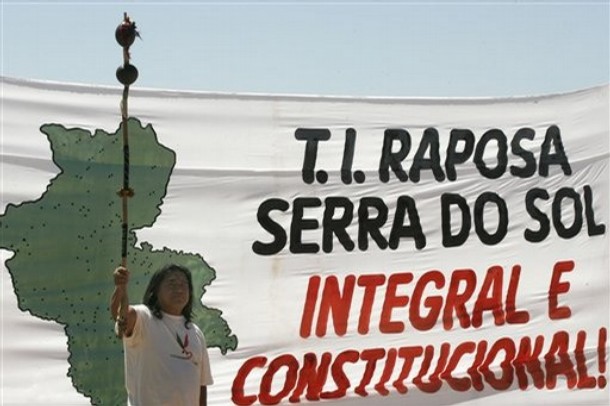 In the month’s Underreported Struggles: 20,000 Lepchas Vow to Die for Their Community; Nicaragua Recognizes Indigenous Land Rights; Dam workers attack the Enawene Nawe; and 18 other stories about the ongoing, world-side struggle for land, rights, and life.

December 29 – Indonesia Police Destroy Indigenous Village – Indonesian police forces have violently evicted 400 indigenous people from their land in the province of Riau on the eastern coast of Sumatra. According to Amnesty International, approximately 700 local security forces entered the village of Suluk Bongka, firing bullets and tear gas. As the villagers fled into the forest, two helicopters dropped what was thought to be a fire accelerant on the village, burning it to the ground.

December 24 – Uprising against Barrick Gold in Tanzania – Earlier this month, thousands of villagers raided a gold mine in Northern Tanzania, setting fire to $7 million worth of mine equipment. Most reports claim the action was performed by “gold-seekers”, however, local reports say the uprising was the result of a murder by a Barrick Security Guard.

December 23 – Lepchas Vow to Die for Their Community – More than 20,000 Lepchas have vowed to die for their community and to ensure that their culture survives for coming generations. At the time, the Lepchas were gathered in Kalimpong, West Bengal, to celebrate the 227th birthday of their King Gyabu Achok.

December 22 – Turkey Goes Rogue on Ilisu – Turkish authorities have started a campaign of repression and expropriation against communities effected by the Ilisu hydro dam project. For starters, “on November 30, the Turkish President authorized the expropriation of more than 20 affected villages under an emergency rule which only applies if national security is at stake. (If completed, the dam will displace up to 70,000 people.)”

December 19 – Canadian Company Threatens El Salvador with CAFTA Lawsuit – A Canadian mining company intends to sue the government of El Salvador for several hundred million dollars if it is not granted permission to open a controversial gold and silver mine that would pollute local water supplies with mercury, cyanide, arsenic, zinc and aluminum.

December 18 – Nicaragua Recognizes Indigenous Land Rights – On December 14, 2008, the government held a ceremony, where it gave the Awas Tingni, an indigenous Mayan community in the Atlantic Coast region of Nicaragua, title to some 74,000 acres of densely forested land, marking the end of a decades-long struggle for land rights.

December 16 – Brazil: Dam workers attack Enawene Nawe Indians – Hydroelectric dam workers have attacked a group of Enawene Nawe Indians who were fishing near a dam building site last week. Enawene Nawe spokesman Daliamase said the workers made the four Indians, two adults and two children, lie on the ground. They then threatened them, beat them with sticks and forced guns into their mouths.

Victory! Brazil Supreme Court Affirms Indigenous Land Rights – Indigenous people are celebrating after a majority of Brazil’s Supreme Court judges ruled to uphold indigenous land rights in Raposa-Serra do Sol. Marking the 60th anniversary of the Universal Declaration of Human Rights, eight of the courts’ eleven judges yesterday “affirmed the Indians’ rights to the land, saying it had been demarcated according to the constitution.”

December 10 – Botswana: Diamond mine gets government approval – on condition Bushmen receive no water – The Botswana government has given its approval to a controversial diamond mine on the land of the Kalahari Bushmen – on the condition that the mining company Gem Diamonds does not provide the Bushmen with water.

2-year moratorium called in the Sacred Headwaters – A moratorium on coal-bed methane drilling in the Sacred Headwaters region of northwestern British Columbia was declared last week by the Provincial government. A welcomed decision by First Nations, environmental groups, commercial fisherman, and concerned citizens alike, the moratorium prevents Shell from going ahead with CBM development for at least the next two years.

December 8 – Navajo and Hopi under threat from coal mine expansion at Black Mesa
The U.S. Office of Surface Mining (OSM) is preparing to make a decision on whether or not Peabody Coal’s “Black Mesa Project,” a dirty coal strip-mining operation in the territories of the Hopi and Navajo, should be permitted to re-open. If the OSM rules in favor of Peabody Coal, the company would be given the rights to use the Navajo Aquifer, and wold further open the door to more evictions of Hopi and Navajo families living in Black Mesa.

December 6 – Indigenous Justice in Colombia – The town center of the Resguardo (Reserve) of Jambaló in Northern Cauca. On November 26th, seven people were kidnapped on the road leading out of Jambalo’s town center, in the village of Pioya. Five were liberated later that night, and the other two in the early hours of the next day. The hostages were liberated by the Indigenous Guard of Jambaló and members of the community, and four of the five kidnappers were apprehended.

December 5 – New Infrastructure Push Threatens Chiapas – The Mexican government is making a renewed push to exploit and destroy the land and people of Chiapas as the reborn Plan Puebla Panama (PPP, now renamed the “Mesoamerica Initiative”) pushes forward in Chiapas.

Haida Nation Opposed to Enbridge Pipeline – The Council of the Haida Nation has rejected Enbridge Inc.’s plans to construct an 1170-km pipeline for moving petroleum from Alberta’s tar sands to the deepsea port in Kitimat, British Colombia, because it would force the Haida to bear a substantial “burden of risk”. Known as “the Northern Gateway project,” the pipeline would carry some 525,000 barrels of petroleum per day, bringing to the edge of Haida territory more than 150 oil tankers a year.

December 4 – Indigenous consultations in limbo – Peru’s Congress has approved a bill that strips the meaning and purpose of consultations with indigenous people over development on their lands, undermining ILO Convention 169 and the UN’s Declaration of Indigenous Rights.

December 1 – Mapuche Increase Opposition Bío Bío River Dam – On November 26, Mapuche Pewenche authorities of the Bío Bío River in Chile met with the Environmental Minister, Ana Lya Uriarte, explaining their opposition to the construction of a new dam on the Bío Bío River. The minister promised to take their concerns under consideration, however, in the same fashion that they consider impacts on any other development project…

Defenders of Mount Tenabo Constructing Encampment – Shoshone men began constructing a permanent camp on the Southern flank of Mt. Tenabo, to monitor the Canadian mining company Barrick Gold. The camp was called on during a protest last week, when Shoshone Grandmothers and their supporters attempted to confront Barrick Gold and bring an end to the destruction of the pinion forest – which began almost immediately after the company got approval to go ahead with its ‘Cortez Hills Expansion Project.’

The Rights of the Land – An in-depth article about Onondaga Nation of central New York, who is attempting to restore health to their traditional territory, and especially to Onondaga Lake, the site where Ayonwatha (Hiawatha) first appeared with his message of peace. “Today, the soil where the Peacemaker walked is a Superfund site. In fact, it’s not soil at all, but a slippery white mass of industrial waste, thirty feet deep.”

Running For Their Lives – A documentary about the Raramuri, sometimes called “Tarahumara”, who live today in the forests and mountains of Northern Mexico. Faced with the destruction of their way of life, the Raramuri ran to the highlands 500 years ago. Today, however, in stead of running, the Raramuri have chosen to stand and fight those attempting to exploit the land