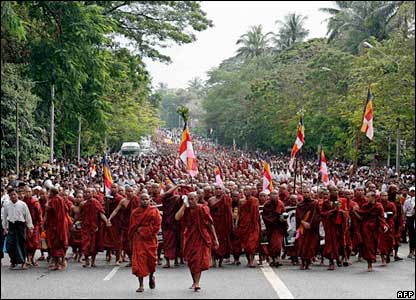 The struggles and events in September were no exception to those relayed in previous months, but after a long and enduring summer of action throughout the world, the political climate has shifted slightly in favor of Indigenous People–or, at least: against irresponsible development.

There were several important achievements this month. For one, a National Indigenous body was formed in Australia, which is very significant. And following the lead of Tambogrande (see the video “Worth More than Gold” below) and others, a popular referendum was held in Peru that saw more than 12,000 people come together and give a resounding NO to the Rio Blanco mining project.

Of course, there is tragedy to report aswell, but rather than allow themselves to be diminished by events , the people instead chose to come together and continue forward… What choice is there when change becomes necessity, and when they only have each other to depend on? We will see more of this in the coming months.

Underreported News of Struggle for September

September 30
Emergency Petition for Burma
Please take a quick moment to sign this petition in support of the peaceful protests in Burma. The petition will be given to Chinese President Hu Jintao and the UN Security Council, urging them to “oppose a violent crackdown on the demonstrators, and to support genuine reconciliation and democracy in Burma. We pledge to hold you accountable for any further bloodshed.” So far there are 244, 753 signatures. See here for background.

September 29
Protesters: we’ll occupy Wellington airport
Descendants of the original landowners of Paraparaumu Airport are threatening demonstrations on the tarmac and injunctions to stop Air New Zealand using the airport unless their land issues are resolved.
Hollow Water standoff, week three
THE First Nations blockade near Hollow Water, now entering its third week with no end in sight, threatens to throw plans for the east side of lake Winnipeg into a shambles… Now, with negotiations stalled and the RCMP unwilling to clear the roads, there’s talk the blockade could escalate to include a provincial highway and even the Bissett gold mine.
Peru’s Indigenous Peoples arise in defense of Earth from mining
Indigenous Peoples from Peru say that while their country’s leaders have endorsed the Declaration on the Rights of Indigenous Peoples at the international level, at home the federal government is preparing to forcibly claim Indigenous lands for mining. Indigenous Peoples are now struggling to protect their territories from a proposed law that would claim the right to appropriate Indigenous territories based on the Peruvian government’s claim that it is a matter of “national interest.”

September 28
Ascendant Copper Risks Losing Mining Project in Ecuador
Earlier this week, the Ecuadorian government held a press conference where it announced that Canada’s Ascendant Copper must suspend all its activities at the controversial Junin project, an open pit copper mine located in the Tropical Andes of Ecuador, for violating the country’s mining laws. This is the fourth stop work order since last December.

September 27
Tribunal charges World Bank with gross abuse of human rights
The four-day Independent Peoples Tribunal (IPT) on the World Bank in India concluded today, finding the World Bank has seriously violated democracy, human rights, and sovereignty in India. The World Bank was invited to participate in the Tribunal, but they failed to show up.
The Kadar – removed but not effected
The Kadar, a people living in the Southern of region of India, found out a month ago that the government of Kerala has decided to go ahead with a controversial dam that will force the removal of Two Kadar communities–permanently disjointing them from their cultural life.

September 25
11 Years of War Against the Zapotec
This is a message from the Indigenous Political Prisoners and Prisoners of Conscience of the Loxicha Region, who discuss the eleven year campaign of extermination, genocide, and ethnocide against the Zapotec People–and also ask for “the democratic organizations and honest, progressive people to take a stand and demand that the corresponding authorities grant us our freedom and order the exit of the army from our dear beloved town that witnessed our births.” See here for more
Rejuvenate, restore, protect: Australian Aboriginal cultural survival and Web 2.0
Discusses the efforts of the Ngalia to preserve, rejuvenate, restore, study, protect, and teach others about their heritage through the use of tools and Services like Google Earth, Youtube, Myspace, and Wikipedia, among others.
Malaysia: Penan in conflict with logging company
The Malaysian authorities have told timber giant Samling that the company will lose its ‘certificate of sustainable management’ unless it resolves its long-running conflict with the Penan, stars of tonight’s BBC television show ‘Tribe’. Without the certificate the company risks being unable to export wood to European and other countries.

September 24
Brazilian Indians Launch Campaign “Guarani Are Great People”
A group of Brazilian Indians has just kicked off a campaign called Guarani People, Great People. The self-esteem-enhancer promotion was launched in the Tey’ kue village, near the municipality of Caarapó, in the state of Mato Grosso do Sul in the Brazilian Midwest. Resulting from a strengthened continental articulation of the Guarani people, the campaign intends to show to society the value of this people, and to intensify the fight for their rights, especially to life and to a land of their own.

September 21
Communities in Peru vote against Rio Blanco
A popular referendum was held in Peru on Sunday to vote on the future of the Río Blanco mining project. The project, which was up until recently owned by the London-based mining company Monterrico Metals, has already shown to have caused damages in the area of development. Local communities say it is a threat to the rivers which they depend on, and that the company itself has been operating illegally on their community-owned lands.

September 18
Judge suspends La Parota dam
Last week, a Judge in the state of Guerrero, Mexico ordered the Federal Electricity Commission (CFE) to suspend any further construction of La Parota dam. The order came as a response to an August 14 request by campesinos for an injunction pending resolution of a lawsuit they filed to stop La Parota altogether. The judge ruled that continuing the project may cause “irreparable damages” to the campesinos.

Canadian Panel rejects mine, destruction of lake
A Joint Review Panel released its report regarding the Kemess Copper-Gold Mine, recommending against it. This is quite possibly the first time in Canadian history the government has made a recommendation against development.

September 14
Norwegian Tamils protest against Sri Lanka Rights violations
Around 200 Norwegian Tamils of Norwegian Tamils Federation (NTF) gathered in front of Norway Foreign Ministry in Oslo, urging Norway to exert pressure on the Government of Sri Lanka (GoSL) to immediately stop the ethnic cleansing of Tamils in Sri Lanka.
A National Indigenous Body has been born
Today, a National Political Body was born for Indigenous People in Australia. The National Aboriginal Alliance (NAA) is the end result of a three-day gathering that took place in Alice Springs this week, which brought together about 100 Aboriginal People from around Australia.

September 12
Open letter concerning gold mining in Honduras
After British and Canadian politicians visited Honduras to have a look at the problems associated with Goldcorp in the region, the Siria Valley Environmental Committee has authored the following open letter—discussing the historical and ongoing damages caused by the open pit gold mine in the Siria Valley (department of Francisco Morazan, Honduras)

September 11
Organized Youth, Strengthened Community
From August 31 to September 2, around 300 young people from the Tupinambá, Pataxó Hã-Hã-Hãe, Pataxó and Tuxá, Tupinikim and Xukuru peoples gathered at the 3rd seminar of Tupinambá young people in the state of Bahia, Brazil. The Tupinambá (also known as the Tupi) have recently begun strengthening their struggle, encouraging its young people to organize themselves.

September 9
Nadleh Whut’en prepared for a blockade
On Thursday, the Nadleh Whut’en posted signs warning non-native logging contractors to leave the Vanderhoof District west of Prince George. They’ve also begun positioning themselves for a blockade, which they originally intended to set up on August 31st. At the time, Chief Martin Louie said they don’t really want to set up a blockade, but they’re being left with no choice, because the contractors just won’t leave.

September 7
Coca-Cola’s Raid on a Sacred Mountain
Coca-Femsa has obtained a 20 year concession from the city of San Cristobal, which claims jurisdiction over Huitepec water, to siphon off five liters a second of the precious fluid for the next generation, for the manufacture of its noxious brew and the commercialization of bottled water. San Cristobal’s claim to ownership of Huitepec water is contested by the Tzotzil Maya in neighboring villages…

Mobilizing to defend the land in Argentina
Tired of putting up with the Argentine Justice system’s inaction, several campesinos from the La Rinconada’s community in Rio Seco, Cordoba recently cut down 10 thousand meters of fence that was illegally placed on their lands by an industrialist. Representatives from the community had talked with the government about this matter on three separate occasions, pointing out that it was a blatant theft which was restricting them and preventing them from living.

September 2
Genocide in Chile: a monument is not enough
In Chile, a bill has been proposed to officially recognize the extermination of the Selk’nam and Aonikenk—as genocide. The bill also proposes to build a monument and to ‘enter the people into history.’

Videos for the month

Amazon: in the hands of a few
Greenpeace recently went to Brazil to visit the Enawene-Nawe and document their ways of life. But upon arriving, farmers and government officials threatened the group, telling them the Enawene-Nawe are “theirs” and that they will not allow the two to meet.
Worth More than Gold
This is a trailer to the film Tambogrande (2003), the story of proud fruit growers from Peru’s northern coast who came together to defend their lands and culture from foreign (Canadian) mining interests.
(The People of Tambogrande organized the world’s first referendum on mining.)
An Appeal for the Katkari
The Katkari are a people based in the Raigad and Thane Districts of Maharashtra, India. Never formally recognized by the state, the Katkari have for years found themselves in abject poverty, living as bonded laborers (slaves) on their own land.