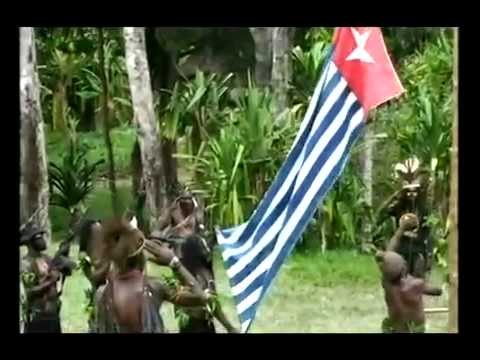 An undercover report broadcast on the BBC about the independence movement in West Papua – where the local indigenous population has been struggling since 1962 to gain independence from brutal Indonesian rule.

West Papua is the western half of the island of New Guinea. It borders alongside the independent state of Papua New Guinea and lies about 250km north of Australia.

Previously occupied by the Dutch, in 1961 the People of West Papua held a Congress where they declared independence and, freeing themselves from colonial rule, raised their new flag, the Morning Star.

“Within months the dream was dead, ” notes the Free West Papua website: “the Indonesian military invaded West Papua and conflict broke out between the Netherlands, Indonesia and the indigenous population regarding control of the country. The US intervened and engineered an agreement between Indonesia and the Netherlands, which in 1962 gave control of West Papua to the United Nations and one year later transferred control to Indonesia. The Papuans were never consulted. However, the agreement did promise them their right to self determination – a right which is guaranteed by the UN to everyone on Earth.”

In the years to come a widespread resistance effort was born, however, it was met with brutal violence, and the death and imprisonment of thousands of West Papuans by the Indonesian military.

That same violence and oppression continues to this day. The military systematically murders, rapes, tortures and imprisons West Papuans, in numbers so high that the word “genocide” doesn’t sound so far fetched. “One of the worst examples of this is the displacement and killing of thousands of people to make way for the giant American- and British-owned Freeport mine, the largest gold mine in the world, which has reduced a sacred mountain to a crater and poisoned the local river system,” explains Free West Papua. “Also, in a further attempt to dominate Papuan culture, around one million people from overcrowded shanty towns across Indonesia have been moved into ‘transmigration’ camps cut into the forests.”

Much of the world has been silent throughout this struggle.Although, in recent years it has been gaining alot more attention. But even so, it’s as if the struggle is happening “somewhere else” — in some far away place, perhaps because it hits so close to home. After all, that same brutal violence was lashed on the Indigenous People of these lands for more than 200 years. The modern identity of an American or a Canadian all stems from that, whether we’re willing to admit it or not.

Nevertheless, the struggle of West Papua is our struggle, just like the struggle of the Lakota and the Yanomami – because we all just want to live our own lives in peace.