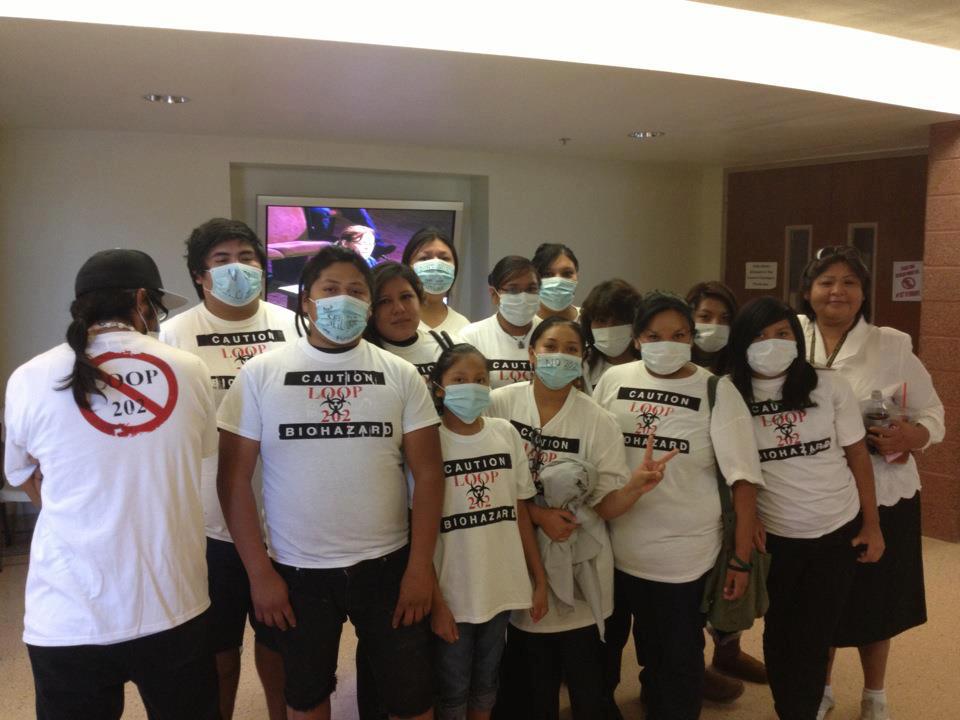 Under the watchful eye of O’odham Youth, Pangea and the PLA’s “City Concept” plan was halted by tribal council

Gila River Against Loop 202 outside council chambers
Support our journalism. Become a Patron!

A group of O’odham youth raised their voices last week against Pangea Development-Co LLC and the Pecos Landowners Association (PLA), without saying a single word. The youths attended a Gila River Indian Community (GRIC) Tribal Council session, wearing breathing masks and No Build 202 shirts to speak “to the looming desecration of Muhadag Do’ag (South Mountain) and to the negative impacts the proposed freeway would bring to the environment and overall community health.”

For more information and updates, and to learn what you can do to help, contact Gila River Against Loop 202 at 202gricagainst202(at)gmail.com or visit their Facebook page and website.

Under the watchful eye of engaged youth and concerned GRIC members, Pangea and the PLA’s “City Concept” plan was halted by tribal council

Sacaton, AZ- At the October 17, 2012 Gila River Indian Community (GRIC) Tribal Council session, Pangea, LLC and the Pecos Landowners Association (PLA) attempted to rush forward their plans pertaining to the construction of a city and freeway within the reservation. Pangea sought the tribal council’s approval for a Memorandum of Understanding (MOU) which granted Pangea and its investors exclusive rights to develop over 5500 acres of tribal land on the reservation’s western end along the route of the proposed Loop 202 freeway, which GRIC voted against last February. The PLA attempted to pressure tribal council to approve the Pangea corporation’s initiative for yet another community vote on the Loop 202.

But to their surprise, Pangea and the PLA were confronted by young people wearing breathing masks and No Build 202 shirts who sought to hold both Pangea and the PLA accountable to last February’s Loop 202 vote. In that vote, GRIC voters voted in favor of the No Build option for the freeway. The Gila River youth, whose breathing masks symbolized the environmental toxins that freeways bring to the land and air, were at the tribal council meeting to demand that their elected officials uphold the No Build voice of the people.

“I can’t vote yet, but if I could, I would have voted No Build too. The people who want the freeway should think about what my generation will go through if all we have to inherit is freeway pollution”said 14 year old Lily Miles, of Komatke and Vah-ki, who was one of the twelve who wore medical breathing masks and No Build shirts in solidarity with the community’s No Build voice.

Since the historic Loop 202 vote, many GRIC members, especially the youth, have felt their tribal leadership has not fully upheld the community’s No Build stance. This suspicion is heightened since GRIC Governor Mendoza allowed Pangea to consult with GRIC’s Office of General Counsel for their City Concept and freeway plans. In addition, Governor Mendoza presented the PLA initiative that calls for another Loop 202 vote at the September 26th GRIC Legislative Standing Committee (LSC).

If approved by the GRIC Tribal Council, the massive Pangea City Concept, the size of over 5000 football fields, would be the largest construction project in the history of the Bureau of Indian Affairs (BIA) and the Gila River Indian Community. The GRIC No Build supporters who attended the Wednesday council session were compelled to raise their voices against Pangea and the PLA in the tribal council chambers without saying one word. Their breathing masks and No Build 202 shirts, stating “Biohazard 202” spoke to the looming desecration of Muhadag Do’ag (South Mountain) and to the negative impacts the proposed freeway would bring to the environment and overall community health.

“Our tribal leaders must be held accountable for where their allegiances lie,” said Renee Jackson of Vah-ki, who was one of the No Build supporters who wore breathing masks and Biohazard 202 shirts during the meeting. “Our representatives must be transparent in where they stand on the issue of the freeway”.

While council went to executive session to decide the merit of Pangea’s MOU and the PLA voting initiative, the twelve youth engaged pro-freeway Gila River landowners in the hallways outside council chambers. The youth shared their concerns regarding the environmental, health and cultural impacts the City Concept would bring to their future while council was in executive session and closed to the public. The mere presence of these twelve helped give a voice to the 720 GRIC members who voted for No Build, and their breathing masks showed the potential danger the freeway would bring.

“Today we showed where the youth stand and we showed that there are youth who care. Pangea and the PLA’s city concept is a danger to our future and both are biohazards to the land and to the mountain,” said Andrew Pedro, 18 years old, from Sacaton, who printed the Biohazard shirts. “People were asking me for more t-shirts, and I believe that this is the first of more visual demonstrations to come.”

“I felt like it was my responsibility to be here and get informed about what is happening around me and in my community because I will be inheriting this land too.” said Karma Miles, 11 years old, from Komatke and Vah-ki.

Despite the differences the youth had with fellow GRIC landowners, the youth presented themselves in a respectful matter, and even helped PLA elders by setting up chairs during executive session.

After nearly an hour in executive session, Tribal Council decided that eleven key points needed to be met before any MOU regarding Pangea’s land use plans could be approved. The eleven points center around public safety, budgeting, jurisdiction, and land management issues that were not addressed within the MOU submitted by Pangea. Council clearly declared that all points must be met before Pangea’s MOU could be brought back before the council. Additionally, the misleading Save the Mountain initiative was held to standard GRIC Community Council Secretary’s Office (CCSO) procedure regarding signatures verification. The PLA submitted their Pangea-backed initiative to the GRIC Community Council Secretary’s Office (CCSO) on September 27 with the backing of 1,527 landowner signatures. Tribal council declared that each signature must be verified first before council would consider the initiative. As with the per capita initiative, a previous people’s initiative in Gila River, the signatures could take the CCSO four to six months to verify, especially with reports of missing tribal enrollment numbers with the signatures submitted, as reported by Community Council Secretary Linda Andrews at the council meeting. The Save the Mountain initiative, which Pangea and PLA deemed” first ever Peoples Initiative through the People’s rights under the GRIC Tribal Constitution”, does not save the mountain because it calls for the rejected freeway to be constructed on tribal lands along the foothills of Muhadag Do’ag (South Mountain).

Despite the steps that are legally required to approve a voter initiative, a Pangea representative pressured council to move forward and approve the pro-freeway initiative. GRIC member Joey Perez of Pangea attempted to have council set a much shorter time frame for approval, by citing the 14th amendment of the GRIC constitution, which declares council has 60 days to make a decision on any initiative bought forth to them. The Pangea corporation’s interpretation, as stated by Perez, was that the 60 days started on September 27, when the signatures were submitted, which would force council to possibly reconsider another Loop 202 vote by the end of the year. But Perez, Pangea and the PLA were soon confronted with standard GRIC procedures regarding initiatives: signatures must be verified before the initiative can be considered by the council.

The reason why the Pangea corporation and pro-build supporters disregard the No Build victory and are attempting to rush the tribal council to schedule another vote on the proposed freeway is because in 2013 federal land leasing regulations for tribal allotted lands become much more restrictive. Changes to Title 25 of the BIA’s Code of Federal Regulations will require 100 percent of landowner consents before the BIA will approve any new leases pertaining to the use of tribal allotted lands for businesses. This would make the Pangea City Concept, which is centered around the construction of the Loop 202, subject to heightened federal regulations.

The decision by Council to hold Pangea and the PLA transparent and accountable to the process was a long overdue first step in reversing its nine months of inaction regarding the No Build vote. Pangea and the PLA were expecting to walk out of the tribal council meeting with another Loop 202 vote scheduled, and their land development plans to be unopposed. But Pangea and the PLA left the October tribal council session in defeat when confronted with the gaping holes of their fraudulent campaign to bulldoze over 5500 acres for a Pangea city, and by the faces of the young people whose future health depends on the preservation and protection of Muhadag Do’ag, and their lands.

“It was a wonderful day, a small victory once again,” said Lori Thomas, of Gila River Alliance for a Clean Environment. “The youth who were present were awesome. It was good to see them engage in the issue. A small battle was won but the fight still rages on.”

For the youth who attended this round of the bigger fight to completely stop the Loop 202, it showed that their involvement will be crucial for the future of the community, and that a new form of expression is needed so that their voices can be heard by the Pangea corporation, the PLA, as well as by the GRIC tribal council and Governor Mendoza.

“We made an impact by representing all the No Build supporters who can’t be here, to go to these meetings and be heard,” said Ana Morago, 18 years old, of Stotonic. “We aren’t bused in, like the way Pangea brings in their people. And even though we didn’t speak, our actions and how we presented ourselves spoke louder”.