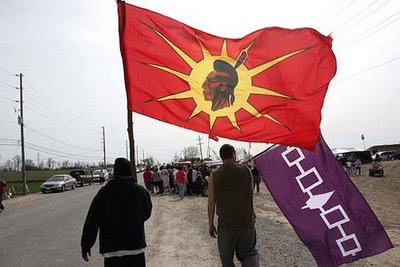 Mohawk Nation News sends the following news and call for action surrounding the upcoming peaceful demonstration in Akwesasne. See the full story (and a full list of contacts) below… UPDATE: there is also a petition you can sign here.

Skarohreh Doug Anderson of the Haudenosaunee Confederacy presented a request to the Secretary of the UN Security Council at 2:58 pm today. Supporters are asked to call 212-963-5258 to ask the UN to send officials to Akwesasne to make peace and to avoid violence from government agents. Kenneth Deer of Kahnawake raised the issue of guns at Akwesasne with the Permanent Forum on Indigenous People. They promised to send some delegates to Akwesasne. A Canadian delegate tried to dissuade any action by the UN. She is helping Prime Minister Harper to stonewall the Indigenous people.

“A treaty was signed between Britain and the U.S., known as the Jay Treaty of 1794. It was to be an undefended border between Canada and the U.S. The purpose was to bring peace between two warring countries. The two parties have remained peaceful since the War of 1812.

“Canada has always dealt with the Indigenous nations by sending RCMP to speak peacefully with us to avoid belligerence. Historically there was little warfare because guns were not used as they are in the U.S. The U.S. stole the West by killing our people. They almost annihilated us. Sitting Bull left for Canada because he knew he would be safe.

“Canada is trying to imitate the U.S. tactic of using threats in their relationship with us. Canada must not start using shot gun diplomacy like the U.S. whose policy of unilateral violence, threatening and murdering people is engulfing the world.

“Foreigners cannot come into our community with guns. They must consult us according to international law standards. A majority of all our people must give our consent. This has never happened. They have no legal right to set up an armed camp in the midst of the populous Haudenosaunne community of Akwesasne [at the convergence of Ontario, Quebec and New York State].

“THERE MUST BE NO GUNS!

“On June 1 the Canada Border Services Agency guards will try to carry 9mm Berettas, which are meant to kill people. The UN must stop this attempt at ethnic cleansing at Akwesasne. Canada at the behest of the U.S. is trying to commit genocide on us, the real people of mother earth.

“The reasonable decision of the Haudenosaunee, our friends and supporters, is that there should be no guns anywhere on the Canada-U.S. border on the Canadian side. Canada is setting a precedent that any visitor arriving will have the barrel of a gun in their faces, so to say. We want the border station to be removed from the middle of Akwesasne.

“We know the power they presently exercise without the guns. They ridicule and demean us as we come through the border. They use their power of intimidation to pull us into their building away from the protective eyes of our friends and relatives. We have no choice but to cross many times a day to carry on our normal lives. The violence will always be directed at us and not at them. We want peace. These supposed peace officers are acting like war zone combatants. What a contradictory message Canada sends out to the world.

“The Jay Treaty has always been a sign to our people that we can cross that border without fear. Kanento Diabo, Clinton Richard and many others made sure that it was always a border of peace. We Mohawks are trying to bring back harmony between parties. Dekanawida urged the warring parties to throw all the weapons down and bury them.

In the 1960s and 70s some Americans did not want to become soldiers, carry guns and shoot people. They came to Canada. They were called draft dodgers. Many prospered and became fond of Canada because it was peace loving and a peacekeeping society. Today Prime Minister Stephen Harper and his cohorts want to change Canada into a petite war monger. They want the people to get used to guns, violence and murder just like the U.S.

Today Kenneth Deer of Kahnawake spoke about Canadian aggression towards us to the UN Permanent Forum on Indigenous Issues, 8th Session. He urged the panel to become involved immediately. Victoria Tauli-Corpuz and Tonya Gonella Frichner, panel members, promised they would send a delegation to Akwesasne to observe and report. They were asked to look at the human rights aspect and to follow it up with the Security Council. Cathie Fournier [613-992-0386] of the Canadian government tried her best to downplay it, by saying, “This forum has no teeth to bite” [just gums!]. She promptly called Ottawa.

Canadians and Americans, beware. You could be next. We need your support.