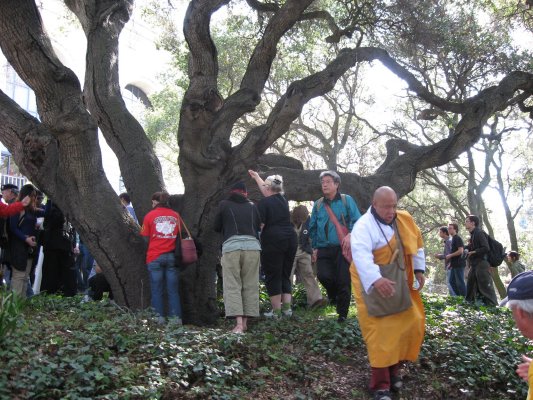 This past weekend, the University of California pushed forward its plan to ‘develop’ Memorial Oak Grove, deemed a sacred burial site to the Ohlone Indigenous Peoples.

On Friday, September 5, University police went to the grove and started cutting down the trees, which have been protected by tree-sitting protesters for more than 600 days. Five people were arrested as they peacefully pleaded with arborists not to destroy the trees.

The University responded by saying another 46 trees would be cut down over the weekend, and that they would no longer honour their agreement to ensure the sitters had enough nutrition and water.

With the remaining four sitters having only a litre of water to share as they sit in 90 degree heat, they were effectively forced to come down on Tuesday. “The treesitters agreed to come down voluntarily, and University representatives agreed that they would make a public statement that the University will create new ways for the community to be involved in land use decisions going forward,” writes Morning Star Gali of the Pit River Tribe and co-chair of Advocates to Protect Sacred Sites.

It sounds “almost” reasonable, if not for the fact that the University continues to deny the Ohlone’s rights. The simple fact is, “Memorial Oak Grove is regarded as a sacred place to Native American people and is documented as such by UC Berkeley’s own Anthropology Department. There is evidence of 2 shell mounds sites in the area, with 19 ancestral remains found within them.”

The University has been undoubtedly informed of this, which means they are consciously and openly committing a crime.

UC Police are further complicit in the denial, by refusing to “[…] honor a prior commitment they made to allow the Native Community to enter the remains of the grove and place tobacco at the stump of the Grandmother Oak once the treesitters come down.”

Describing the situation, Morning Star said on Friday, “I brought my five year old daughter and two month old son out today to bear witness to the massacre of sacred life. The cops responded by yelling to move them behind the median. I asked if they would stand by as complacent if it was their grandmother’s gravesites being desecrated. I want my children here to witness the destruction of sacred life and how important it is to protect it. I wanted them to witness the cops, arborists and UC Officials that participated and cheered as the trees came crashing down from bulldozers.

“This exhibits the ongoing Human Rights abuses committed by the University. They refuse to comply with NAGPRA by holding 13,000 of our ancestors remains hostage, they illegally reorganized NAGPRA with no tribal consultation and now they continue to desecrate sacred burial grounds.”