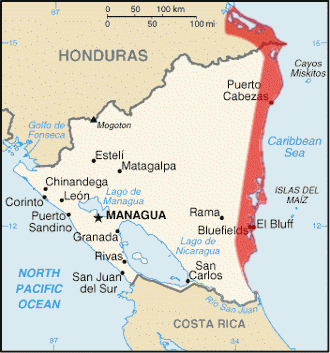 Location of the Mosquito Coast
Support our journalism. Become a Patron!

Rights Action reports on a recent independent inquiry into the May 11, 2012 massacre of indigenous Miskito people in the Moskitia region of Honduras.

A much more detailed report is available at the following link: D.E.A. Action Leads To Massacre In Honduras: Indigenous Communities Once Again The Target Of “Counterinsurgency” In Central America.

On May 22 and 23 a delegation of human rights activists from the United States organized by Rights Action and Alliance for Global Justice visited the community of Ahuás in the Moskitia region of Honduras. The delegation witnessed an atmosphere of terror being generated amongst dire poverty in an area where the indigenous people are now losing control of natural resources which are key to the development of their economy.

The group inquired into the May 11, 2012 massacre of indigenous Miskito people by gunfire from U.S. State Department – titled helicopters that the US government confirms carried U.S. DEA agents and security contractors. The boat and its passengers had almost completed an eight hour trip to Ahuas from the town of Barra Patuca. Four were killed, including two pregnant women, a 14-year-old boy and a 21-year-old man, while at least four more were seriously injured.

Following the massacre at least one helicopter landed and at least ten, tall, light-skinned English speakers with limited Spanish proficiency wearing military type uniforms exited the helicopters to collect cocaine from a boat near the massacre site. They aimed guns at, threatened to kill, and handcuffed residents of the town who had come to assist the wounded. Victims lay on the banks of the river and in the damaged boat until after helicopters departed. In this way security forces delayed emergency medical assistance two to three hours.

Neither U.S. nor Honduran authorities have interviewed the eye witnesses or secured evidence at the crime scene, indicating that no serious investigation has been conducted into the massacre. Even without conducting a serious investigation U.S. and Honduran officials have accused the victims, the population in general and local authorities of participating in drug trafficking.

Since the massacre Ahuas has been occupied by several dozen Honduran troops, and it is reported that U.S. military presence in the vicinity of Ahuas is increasing. U.S. government authorities recognize that counterinsurgency tactics are being used while they identify the indigenous communities as drug traffickers. Indigenous communities in Central America have once again become the focus of U.S. counterinsurgency actions.

Many people the group spoke with noted that militarization and violence generated by the U.S. drug war is focused where there are significant natural resources, Ahuas is known to hold significant petroleum deposits and Texas-based Honduras Tejas Oil and Gas Company, a joint venture with concessions in the Moskitia, estimates there are six to eight billion barrels of oil reserves in the Moskitia.

The delegation is calling for a serious and credible investigation including a Congressional hearing that identifies criminal responsibility in the massacre, the withdrawal of U.S. security forces from Honduras, and suspension of U.S. military assistance to Central America.