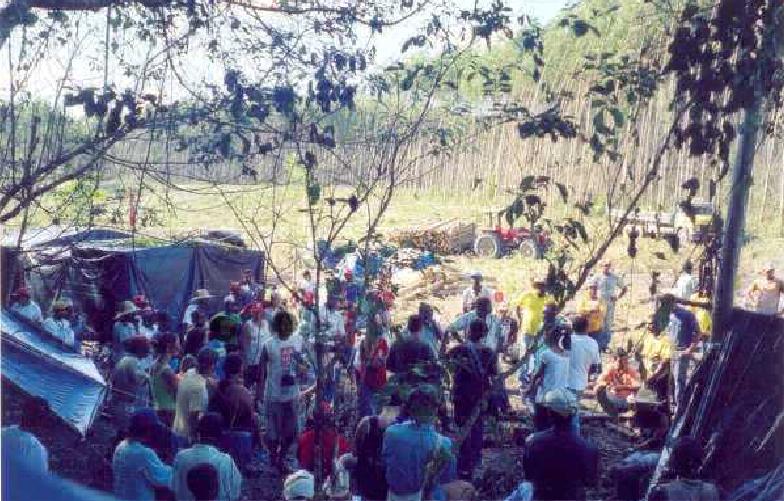 On July 23, the Tupinikim and Guarani along with several Quilombolas began an effort to reclaim 11,009 hectares of land in Espiritu Santo, Brazil— land which is currently occupied and used by Aracruz Cellulose for a Eucalyptus Plantation.

In an Open Letter released the following day, the Commission of Tupinikim and Guarani Chiefs and Leaders stated that they’ve been waiting for nearly 40 years for the government to address this matter, but they do nothing but avoid and delay resolution.

Well, the reclamation was initially successful. They started out by rebuilding one of the settlements that had been destroyed in 2006–constructing homes, and planting species of Atlantic forest to begin returning some diversity to the land, and alsocorn, beans, pumpkins, coconut and banana for future harvests.

Some time after July 23 however, Aracruz filed a legal action which brought the reclamation to an end on August 11, at which time a special group of the Military Police came in to forcefully evict everyone.

But it’s not all over yet…. Afterall, the Commission of Tupinikim and Guarani Chiefs and Leaders made it quite clear at the end of their open letter:

…our struggle aims to recover our land and we will not desist from this right. If the neglect and delay of the federal government persists, we will intensify our actions to consolidate the possession of the lands of our ancestors and of our children and grandchildren, including restarting the cutting of eucalyptus trees by the indigenous communities.”

From Real World Radio – Quilombolas communities from Espiritu Santo, in Brazil, were once again evicted from their territories on August 11th by pulp manufacturer Aracruz Celulose, which is appropriating lands the Brazilian state had recognized that belong to these communities.

From July 23rd, a group of slave descendants, known as ‘quilombolas’ planned to reoccupy the Linharinho territory in Espirito Santo state, Brazil, from which they had been evicted by paper and pulp manufacturer Aracruz Celulose.

After occupying the lands for twenty days, a special group of the Military Police evicted the families camping in Linharinho, as a result of a legal action filed by Aracruz to reappropriate the lands. This action was rejected by the quilombolas, critized by social organizations and questioned by lawyers.

The quilombolas argue that Aracruz regularly invades quilombolas lands, including Linharinho, by using these lands to plant eucalyptus, leaving the slaves descendants without lands to work and produce their own food.

The police and employees of Aracruz destroyed buildings and seized all the materials and personal belongings of the quilombolas.

The Institute of Colonization and Agrarian Reform (INCRA) issued a technical report recognizing the quilombolas right to Linharinho land and demarcated nearly 9,600 hectares which are currently occupied by Aracruz.

During the reoccupation of lands, the quilombolas have cut down ecualyptus and planted species of Atlantic forest, corn, beans, pumpkins, coconut and bananas, besides building stucco houses with the help of other quilombola communities.