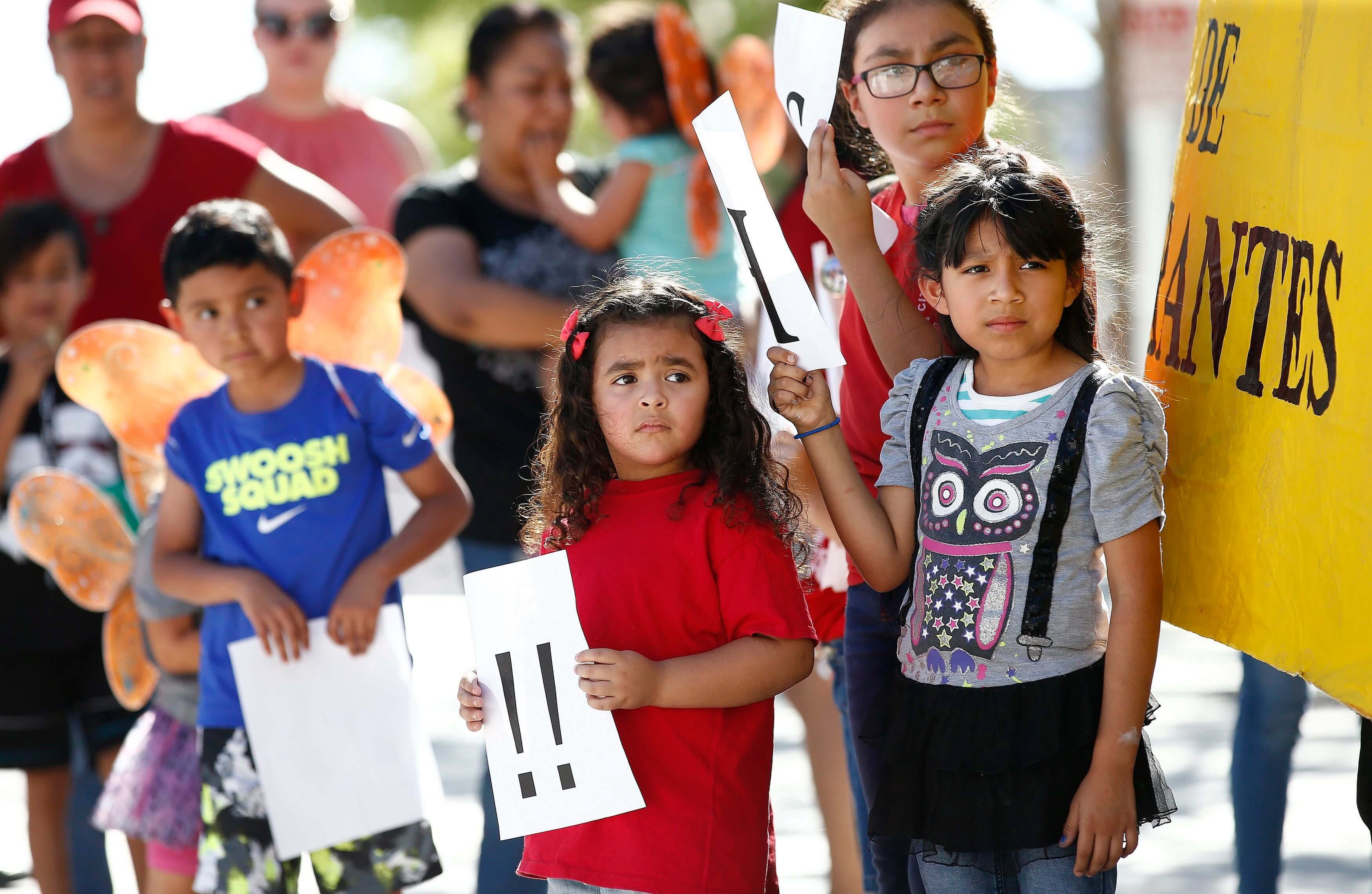 State terrorism comes in many forms, but one of its most cruel and revolting expressions is when it is aimed at children.

Even though U.S. President Donald Trump backed down in the face of a scathing political and public outcry and ended his administration’s policy of separating migrant children from their parents, make no mistake: His actions were and remain a form of terrorism.

That he was defiant until his back was against the wall points not only to a society that has lost its moral compass, but has also descended into such darkness that it demands both the loudest forms of moral outrage and a collective resistance aimed at eliminating the narratives, power relations and values that support it.

State violence against children has a long, dark history among authoritarian regimes.

Josef Stalin’s police took children from the parents he labelled as “enemies of the people.” Adolf Hitler, Francisco Franco and Augusto Pinochet all separated children from their families on a large scale as a way to punish political dissidents and those parents considered disposable.

Now we can add Trump to the list of the depraved.

Amnesty International called Trump’s decision to separate children from their parents and warehouse them in cages and tents for months as a cruel policy that amounts to “nothing short of torture.”

Many of the parents whose children were taken away from them entered the country legally, unwittingly exposing what resembles a state-sanctioned policy of racial cleansing. Allegations of abuse against the children while detained are emerging. And federal U.S. officials have said despite Trump’s about-face, children who have already been separated from their parents — more than 2,000 of them — will not be reunited with them. 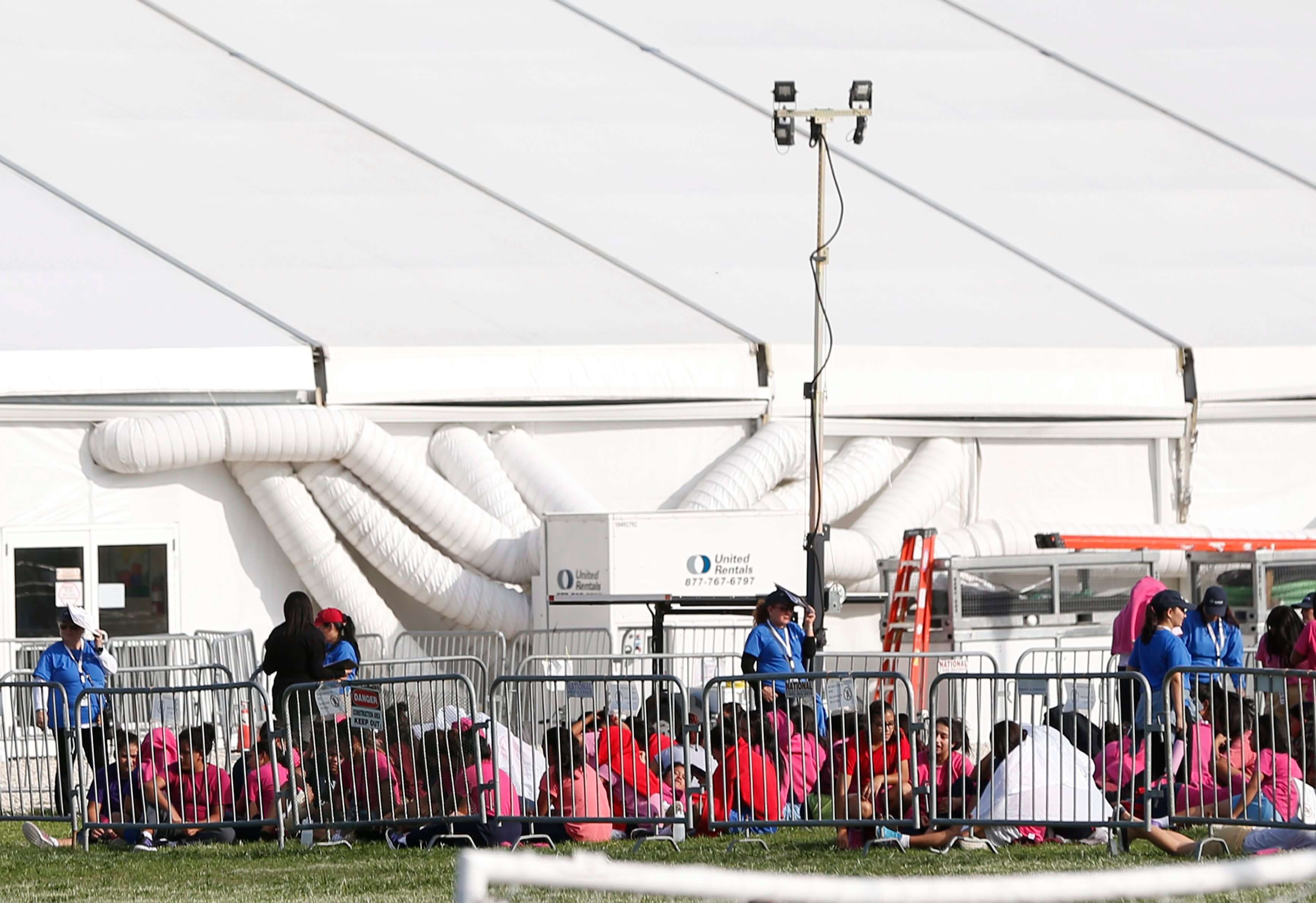 Immigrant children are shown outside a former Job Corps site that now houses them on June 18, 2018, in Homestead, Fla. AP Photo/Wilfredo Lee)

In any democratic society, the primary index through which a society registers its own meaning, vision and politics is measured by how it treats its children, and its commitment to the ideal that a civilized society is one that does everything it can to make the future and the world a better place for youth.

By this measure, the Trump administration has done more than fail in its commitment to children. It has abused, terrorized and scarred them. What’s more, this policy was ludicrously initiated and legitimized by Attorney General Jeff Sessions, a notorious anti-immigrant advocate, with a Bible verse that was used historically by racists to justify slavery.

In the name of religion and without irony, Sessions put into play a policy that has been a hallmark of authoritarian regimes.

At the same time, Trump justified the policy with the notorious lie that the Democrats have to change the law for the separations to stop, when in actuality the separations are the result of a policy inaugurated by Sessions under Trump’s direction.

Trump wrote on Twitter that the Democrats are breaking up families.

It is the Democrats fault for being weak and ineffective with Boarder Security and Crime. Tell them to start thinking about the people devastated by Crime coming from illegal immigration. Change the laws!

Yet according to the New York Times:

Mr. Trump was misrepresenting his own policy. There is no law that says children must be taken from their parents if they cross the border unlawfully, and previous administrations have made exceptions for those travelling with minor children when prosecuting immigrants for illegal entry. A “zero tolerance” policy created by the president in April and put into effect last month by the attorney general, Jeff Sessions, allows no such exceptions, Mr. Trump’s advisers say.

We do not have a policy of separating families at the border. Period.

This is an extension of the carceral state to the most vulnerable groups, putting into play a punitive policy that signals a descent into fascism, American-style.

The New Yorker’s Marsha Gessen got it right in comparing Trump’s policies towards children to those used by Vladimir Putin in Russia, both of which amounts to what she calls “an instrument of totalitarian terror.”

Both countries arrest children in order to send a powerful message to their enemies. In this case, Trump’s message was designed to terrorize immigrants while shoring up his base, while Putin’s message is to squelch dissent in general among the larger populace. Referring to Putin’s reign of terror, she writes:

The spectacle of children being arrested sends a stronger message than any amount of police violence against adults could do. The threat that children might be removed from their families is likely to compel parents to keep their kids at home next time — and to stay home themselves.

Children screaming for their parents

Within the last few weeks, heart-wrenching reports, images and audio have emerged in which children, including infants, were forcibly separated from their parents, relocated to detention centres under-staffed by professional caretakers and housed in what some reporters have described as cages.

The consequences of Trump’s xenophobia are agonizingly clear in reports of migrant children screaming out for their parents, babies crying incessantly, infants housed with teenagers who don’t know how to change diapers and shattered and traumatized families.

In some cases, it deported parents without first uniting them with their detained children. What is equally horrifying and morally reprehensible is that previous studies, such as those done by Anna Freud and Dorothy Burlingham in the midst of the Second World War, indicated that children separated from their parents suffered both emotionally in the short run and were plagued by long-term separation anxieties.

It’s no wonder the American Academy of Pediatrics referred to the Trump administration’s policy of separating children from their families as one of “sweeping cruelty.” 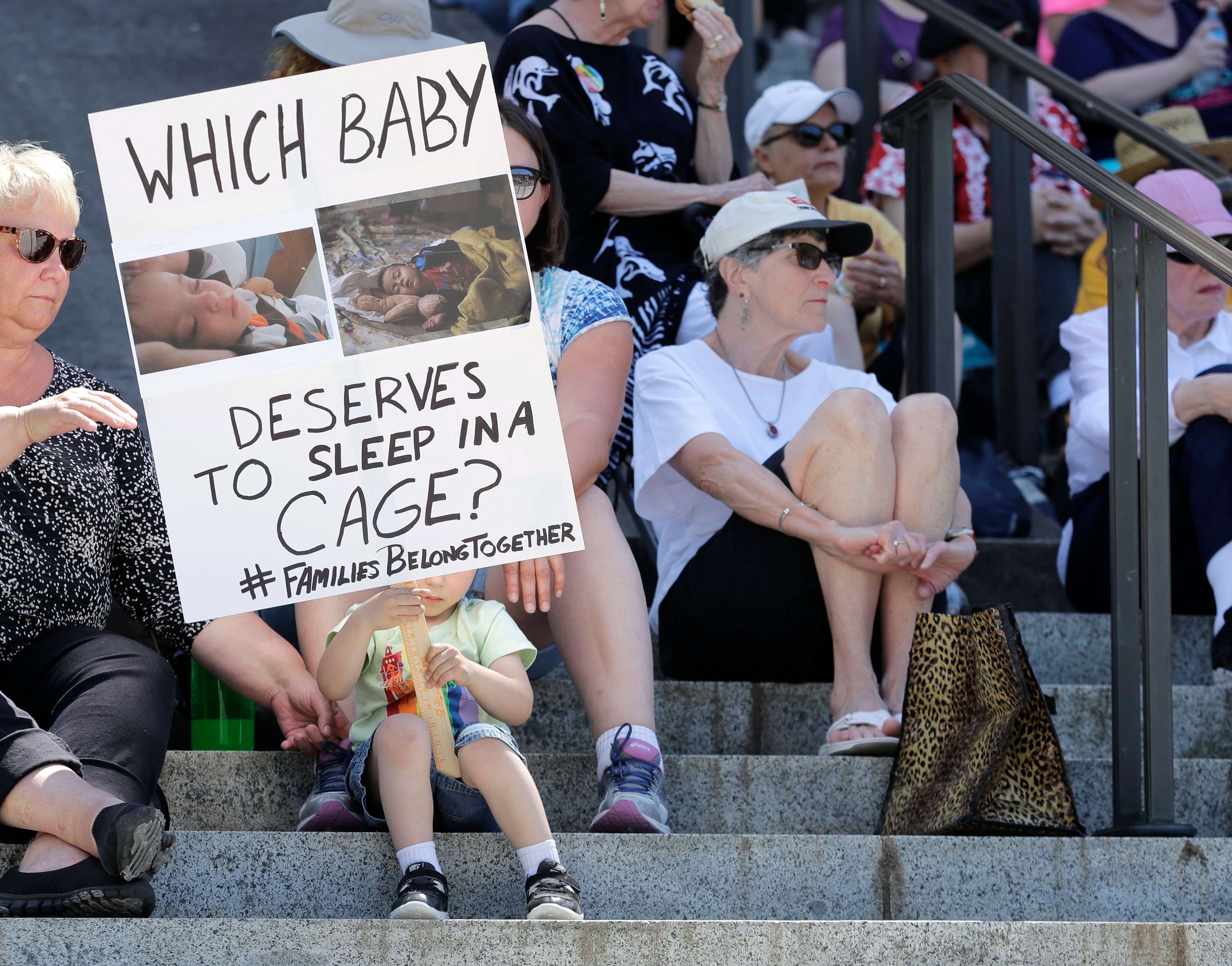 Christopher Baker, 3, holds a sign that reads ‘Which baby deserves to sleep in a cage?’ as he attends a Poor People’s Campaign rally with his mother in Olympia, Wash., on June 18. AP Photo/Ted S. Warren

Trump has mobilized the fascist fervour that inevitably leads to prisons, detention centres and acts of domestic terrorism and state violence. Echoes of Nazi camps, Japanese internment prisons and the mass incarceration of Black and brown people, along with the destruction of their families, are now part of Trump’s legacy.

Shameless cruelty now marks the neoliberal fascism currently shaping American society. Trump used children as hostages in his attempt to implement his racist policy of building a wall on the U.S.-Mexico border and to please his white supremacist base.

Trump’s racism was on full display as he dug in to defend this white supremacist policy.

Democrats are the problem. They don’t care about crime and want illegal immigrants, no matter how bad they may be, to pour into and infest our Country, like MS-13. They can’t win on their terrible policies, so they view them as potential voters!

He likened migrants to insects or disease-carrying rodents. In the past, he has also called undocumented immigrants “animals.” This is a rhetoric with a dark past. The Nazis used similar analogies to describe Jews. This is the language of white supremacy and neo-fascism.

Long history in the U.S.

But let’s be clear. While the caging of children provoked a great deal of moral outrage across the ideological spectrum, the underlying logic has been largely ignored.

These tactics have a long history in the United States, and in recent years have been intensified with the collapse of the social contract, expanding inequality and the increasing criminalization of a range of behaviours associated with immigrants, young people and those populations considered most vulnerable.

The horrible treatment of immigrant parents and children by the Trump regime signals not only a hatred of human rights, justice and democracy, it lays bare a growing fascism in the United States in which politics and power are now being used to foster disposability. White supremacists, religious fundamentalists and political extremists are now in charge.

It’s all a logical extension of his plans to deport 300,000 immigrants and refugees, including 200,000 Salvadorans and 86,000 Hondurans, by revoking their temporary protected status.

His cruelty is also evident in his rescinding of DACA for 800,000 so-called dreamers and the removal of temporary protected status for 248,000 refugees.

“Making America Great Again” and “America First” morphed into an unprecedented and unapologetic act of terrorism against immigrants. While the Obama administration also locked up the families of immigrants, it eventually scaled back the practice.

Under Trump, the savage practice accelerated and intensified. His administration refused to consider more humane practices, such as community management of asylum-seekers.

It all functions as short hand for making America white again, and signals the unwillingness of the United States to break from its past and the ghosts of a lethal authoritarianism.

It’s also more evidence of Trump’s love affair with the practices of other dictators like Putin and now Kim Jong Un. And it signals a growing consolidation of power that is matched by the use of the repressive powers of the state to brutalize and threaten those who don’t fit into Trump’s white nationalist vision of the United States.

There is more at work here than the collapse of humanity and ethics under the Trump regime, there is also a process of dehumanization, racial cleansing and a convulsion of hatred toward those marked as disposable that echoes the darkest elements of fascism’s tenets.

The U.S. has now entered into a new era of racial hatred.

What has happened to the children and parents of immigrants does more than reek of cruelty, it points to a country in which matters of life and death have become unmoored from the principles of justice, compassion and democracy itself.

The horrors of fascism’s past have now travelled from the history books to modern times. The steep path to violence and cruelty can no longer be ignored. The time has come for the American public, politicians, educators, social movements and others to make clear that resistance to the emerging fascism in the United States is not an option —but a dire and urgent necessity.

Henry Giroux, Chaired professor for Scholarship in the Public Interest in the Department of English and Cultural Studies, McMaster University