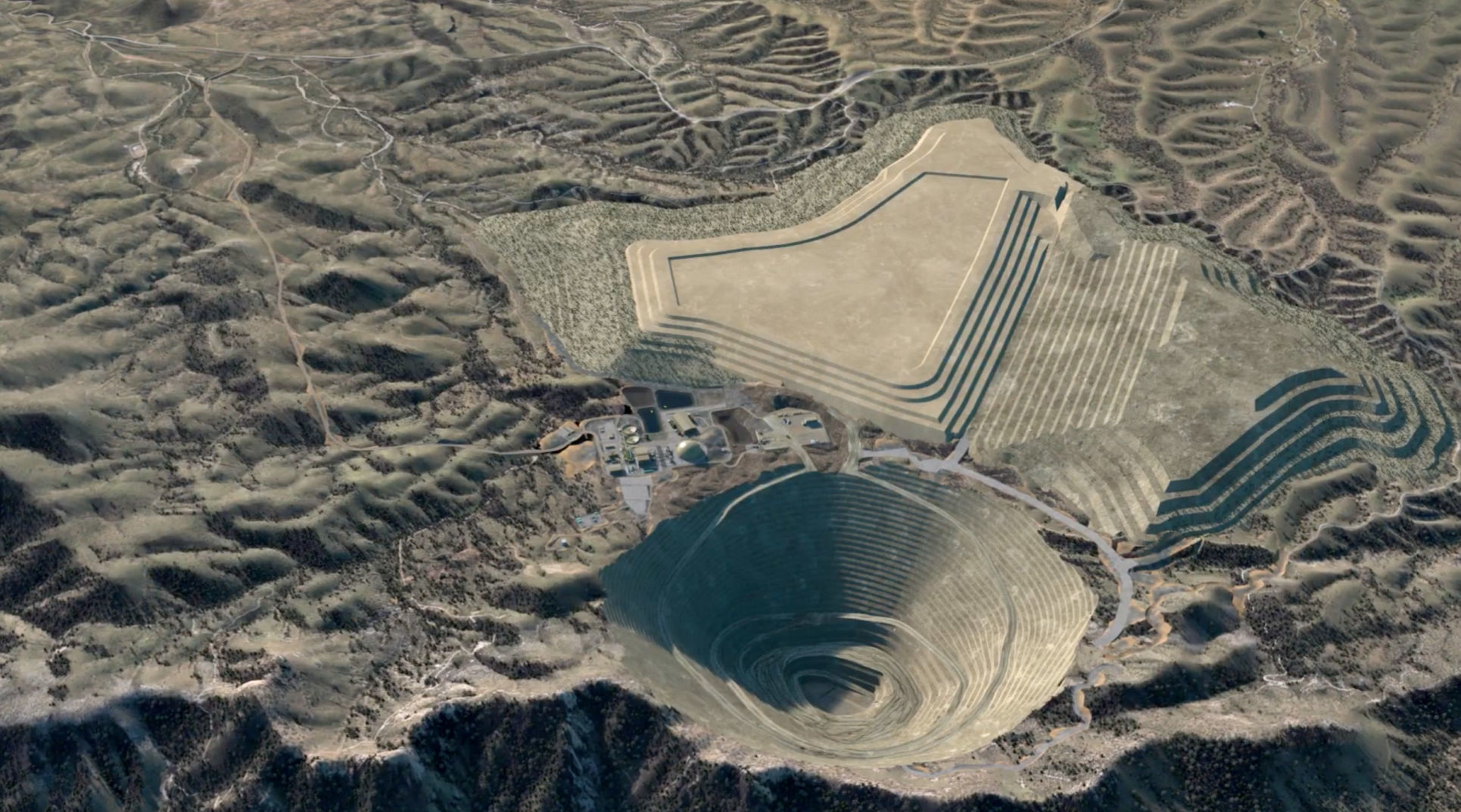 Tribes win ruling against copper mine on ancestral territory

A computer rendering, taken from a 2019 Hudbay video of the planned Rosemont Mine, shows what the open pit and tailings piles west of Arizona 83 (the Sonoita highway) in the Santa Rita Mountains south of Tucson might look like.
Support our journalism. Become a Patron!

PHOENIX – A federal judge has halted plans to begin digging an open-pit copper mine this month south of Tucson, citing an “inherently flawed” analysis of surface-use rights by the U.S. Forest Service.

The Rosemont Mine in the Santa Rita Mountains has for more than a decade been tied up in litigation over the permits needed to open what would be the third largest copper mine in the U.S. Construction had been slated to begin Thursday.

Wednesday’s ruling by U.S. District Judge James Soto of Arizona overturns a decision by the U.S. Forest Service in 2017 that granted Rosemont Copper Co. final approval to dig a large-scale pit mine in the Coronado National Forest.

Conservationists cheered the ruling as a victory for humans and wildlife. Hudbay Minerals of Toronto, which owns Rosemont Copper, intends to appeal.

“These defects,” he wrote, “led to an inherently flawed analysis from the inception of the proposed Rosemont Mine.”

Hudbay Minerals plans to appeal the decision to the 9th U.S. Circuit Court of Appeals. In a statement on the company’s website, the company stated that “the Court has misinterpreted federal mining laws and Forest Service regulations as they apply to Rosemont.”

“We are extremely disappointed with the Court’s decision. We strongly believe that the project conforms to federal laws and regulations that have been in place for decades,” said Peter Kukielski, Hudbay’s interim president and chief executive officer.

Several environmental organizations, including the Center for Biological Diversity, the Arizona Mining Reform Coalition and the Sierra Club’s Grand Canyon Chapter, sued in November 2017 challenging the Forest Service’s approval of the mine. The center also sued the U.S. Fish and Wildlife Service over its determination that the mine wouldn’t harm threatened and endangered species. That decision is pending, the center said in a press release.

“This is a crucial victory for jaguars and other wildlife that call the Santa Ritas home,” said Randy Serraglio, a conservation advocate at the Center for Biological Diversity. “The judge’s ruling protects important springs and streams from being destroyed. We’ll move forward with everything we’ve got to keep protecting this southern Arizona jewel from this toxic mine.”

The Tohono O’odham Nation, Pasqua Yaqui Tribe, and Hopi Tribe also were part of the suit. The Forest Service noted that the Rosemont Mine would have disturbed and desecrated 33 Native American burial grounds in the area.

On its website, Hudbay said the copper mine, once in operation would employ 500 people and generate an estimated $350 million in local tax revenues over 24 to 30 years.

In its final environmental impact statement, the Forest Service outlined six alternatives for the mine and noted that the resulting circular pit that would measure 6,000 to 6,500 feet in diameter, with a final depth of 1,800 to 2,900 feet. The Forest Service estimated the Rosemont mine would produce about 550 million tons of ore and 1,288 million tons of waste rock.

This story is part of Elemental: Covering Sustainability, a new multimedia collaboration between Cronkite News, Arizona PBS, KJZZ, KPCC, Rocky Mountain PBS and PBS SoCal. It has been republished at IC under a Creative Commons License.