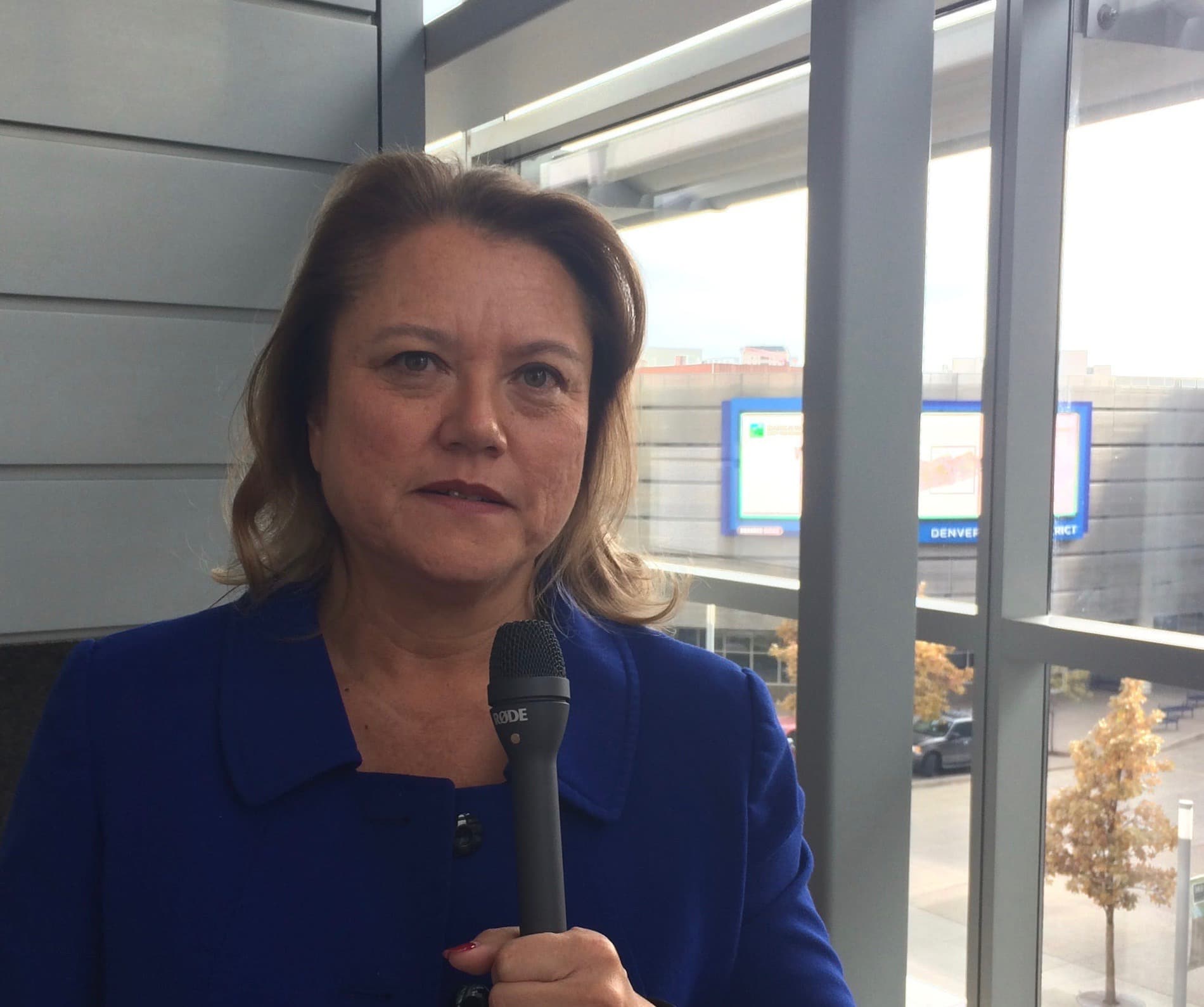 There are lots of reasons for Indian Country to vote next week: To pick a governor, a member of Congress or a state representative. But that’s not the only thing on the ballot. There are also initiatives, laws passed by citizens, that will impact tribal communities in a big way.

Washington state’s tribes are leading the effort to pass a statewide initiative on climate change, I-1631.

Fawn Sharp, president of the Quinault Nation, said tribes started talking about this initiative two years ago because of a decade of inaction in state legislatures and in Congress. “So it became clear to us that the power, the real power of our country lies in the vote of the individual citizen,” Sharp said. To build support for the initiative — and for #NativeVote18 — tribes are on a 29 reservation tour to get the word out ending in an Election Day watch party.

The initiative would impose a fee of $15 per metric ton of carbon pollution on the state’s biggest polluters, including oil refineries. Oil refineries generated 4.6 million metric tons of greenhouse gases during refinery operations in 2016, the latest year for which data is available, according to The Seattle Times. It says four oil companies are spending more than $25 million in an attempt to defeat the initiative.

“This initiative is important for a number of reasons. First of all, it provides 10 percent of all carbon revenues directly to tribal nations. We’re not just merely eligible stakeholders. It’s a dedicated revenue stream. The first year we’re anticipating $1,000,000,000 worth of revenues. So 10 percent of that is 100 million to $400 million annually at $15 a metric ton that goes up $2 a metric ton every year until 2035,” she said. Tribes will also hold leadership positions on the each of the committees that would be established in the initiative, ranging from economic development to climate impacts on fisheries.

The initiative also requires free, prior and informed consent, adopting the UN Declaration on the Rights of Indigenous Peoples.

Tribal governments say that they cannot wait for climate change policy to catch up with what’s already happening in communities. On the Quinault Nation “from my first year in office over 12 years ago, I was confronted with the issue of climate change in a very real way. Our tribal fishermen talk to me about the decline of our sockeye salmon. The prize, blueback salmon that only returns to the Quinault in the fifties and sixties. We had millions of sockeye the year I got elected, we only had 4,000 in this last year. Our fisherman only harvested 27 sockeye.”

“For us it’s not only a staple of our diet, it’s our identity, it’s who we are as Quinault people,” she said. “I’s unimaginable for me to, to try to explain to future generations … what blue back stock I tasted like, what it looked like. But that’s not gonna happen. We’re going to make that change.”

Indeed, she says, “the tribes in Washington state are going to accomplish with no president has been able to accomplish. No governor, no senator, no representative. It’s going to be Indian country occupying this leadership void in the climate discussion in this country.

Initiative 185 would increase taxes on tobacco — and make Medicaid expansion permanent. Medicaid has become an essential funding stream for the Indian Health Service.

It’s hard to overstate the impact of Medicaid expansion in many states, including Montana.

“Montana’s economy has benefited substantially from Medicaid expansion,” reports the Montana Budget and Policy Center. “Over 96,000 Montanans have gained health care coverage through Medicaid, most of whom would have been uninsured without it. Families with incomes below 138 percent of the federal poverty line are eligible for coverage (for a single individual, income below $16,750). In the first two years, the HELP Act paid for more than $1 billion in health care services, with over 90 percent of the cost covered by the federal government. Medicaid expansion has brought new federal funding into Montana, boosting Montana’s economy through increased spending by hospitals, providers, employers, the state, and individuals on health care services.”

Another report report from the University of Montana says Medicaid expansion generated $1.2 billion in personal income, $2.6 billion in new sales, and more than 5,326 new jobs, mostly in the health care sector.

But Medicaid expansion is slated to expire in 2019 unless the legislature acts or an initiative becomes law.

Montana voters must also vote on a ballot initiative that would make voting harder. This law (similar to other state laws that have already impacted tribal communities) would make it illegal for anyone who isn’t “an election official, postal worker, caregiver, family member, household member, or an acquaintance” from collecting another person’s ballot, and require those individuals who are permitted to collect a ballot on another’s behalf to sign a registry and provide contact information for both themselves and each voter whose ballot they are turning in.”

Rep. Shane Morigeau, Confederated Salish & Kootenai Tribes, says this ballot measure would “suppresses the vote for low income communities, many of which are on our reservations. This is intended to prevent organizations and individuals from driving around and helping low income and minority people with submitting their ballots for an election.”

He said that claims by Republicans in the legislature was that the measure “was intended to prevent ‘voter fraud.’ However, there is no data to support such fraud that they continue to claim. In my opinion, it’s absolutely unconstitutional. One can easily identify that this targets minority people in Montana, especially when so many Indians live in areas without actual mailing addresses or modes of transportation.”

Idaho is one of the most conservative states in the country — and its legislature is even more conservative. So the idea of Medicaid expansion under the Affordable Care Act has been a non-starter. But voters will get their own review via Proposition 2.

Paulette Jordan is a key supporter of this measure — and it could bring people to the polls who would also vote for her. “Like many Idahoans, on Nov. 6, I expect to celebrate the passage of Proposition 2 to expand Medicaid to our 62,000 neighbors,” Jordan wrote in The Idaho Statesman. “But I also realize that supporting Proposition 2 at the ballot box is just the first step to ensure people are covered not only for catastrophic health events but for preventative medical care too. We know early treatment both shortens the road to recovery and saves money. But make no mistake, for Proposition 2 to do what voters intend, Idaho’s next governor must wholeheartedly push for fully funding expansion while vetoing attempts by the legislature not to.”

Alaska is considering a measure that would require the state “to apply new standards to permitting activities and development projects that have the potential to harm fish habitat.” Ballot Measure 1, the Stand for Salmon initiative, is dividing many in the Alaska Native community.

More than a hundred tribes have come out in support of the initiative. “Protecting our land, our water and our legacy of salmon for our children and grandchildren is at the core of who we are as Alaska Natives,” said Gayla Hoseth, Ballot Measure 1 sponsor and Second Chief of the Curyung Tribal Council told the Delta Discovery. “Ballot Measure 1 is bringing together an unprecedented movement of everyday Alaskans who want clear rules for development in salmon habitat, and who want to finally give Alaska Natives a voice to protect our way of life.”

However 10 of the 12 Alaska Native corporations have come out against the measure. At a recent debate in Juneau, Kim Reitmeier, executive director of the ANCSA Regional Association, which represents the Alaska Native corporations, said the measure would be costly and create more burden on the management of 44 million acres of land. “We deserve the right to manage our land … this takes that away from us,” she said in The Juneau Empire.

However in the same debate, Stephanie Quinn-Davidson, director of the Yukon River intertribal fish commission, said the state does not have an effective regulatory structure. She said the costs implementation are fair because it will protect a salmon industry that employs more than 32,000 people.

Mark Trahant is editor of Indian Country Today. He is a member of the Shoshone-Bannock Tribes. Follow him on Twitter – @TrahantReports

This article was originally published at Indian Country Today. It has been republished on IC with permission.