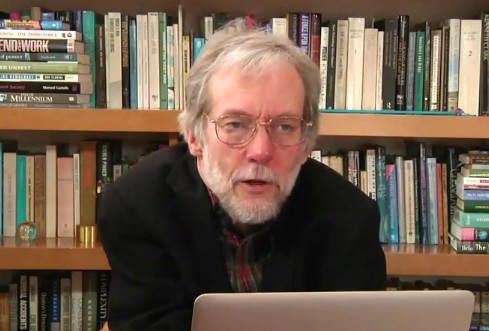 In this video, David Ronfeldt introduces you to an organizational model he affectionately refers to as TIMN, its focus on social evolution, its system dynamics, and its future implications.

TIMN represents the four primary forms of organization: Tribes, Institutions, Markets and Networks. By understanding these forms and their relationship to one another, we can see precisely how collective society has evolved (at least from an organizational standpoint) and where it is headed.

An important point to make, however, is that no one form of organization is necessarily “better” than the other. While opinions will differ widely on that, the relative worth of Tribes, Institutions, Markets and Networks are ultimately determined by how those forms are deployed in real life. Capitalism is a good example. There is nothing inherently wrong with capitalism. However, this one peculiar form of market has been permitted to take precedence over preceding social forms. For evidence on that, just look at any of the 500 ongoing struggles involving Indigenous Peoples around the world and all of the economic and political rumblings we’re seeing in the United States today.

Another key point of this framework is each new social form contains elements of the others that preceded it. In other words, we’re talking about a house, which has been dramatically renovated on two separate occasions. TIMN also dictates that we are now in the midst of a third and perhaps final renovation process; that being our ever-growing adaptation to/reliance on the “Network” form. And not just in the sense of social media (Twitter, facebook, Avaaz, etc.) and peer to peer sharing which is clearly putting the hurt on the old market economy.

The Network form is taking shape everywhere, giving rise to something localized and especially disconcerting to those who have grown so accustomed to the “T+I+M” relationship. Again, look at all the massive struggles taking place on the ground from the occupy movement to the Arab Spring the movement against the tar sands to the half-dozen “Mingas” that took place in Colombia, Ecuador, Brazil and Peru from 2007 to 2009.

As this theory is still in its infancy, there’s much more worth exploring (when we’re taking a break from fighting evil doers). For instance, by understanding the logic and philosophy that stems from each network, we can see the problem with the Indigenous Nation-Nation State relationship and why the US government refuses to actively protect Indigenous Sacred sites. Of course, it also shows us what it’s going to take to hold governments, corporations and non-governmental organizations accountable for their actions.