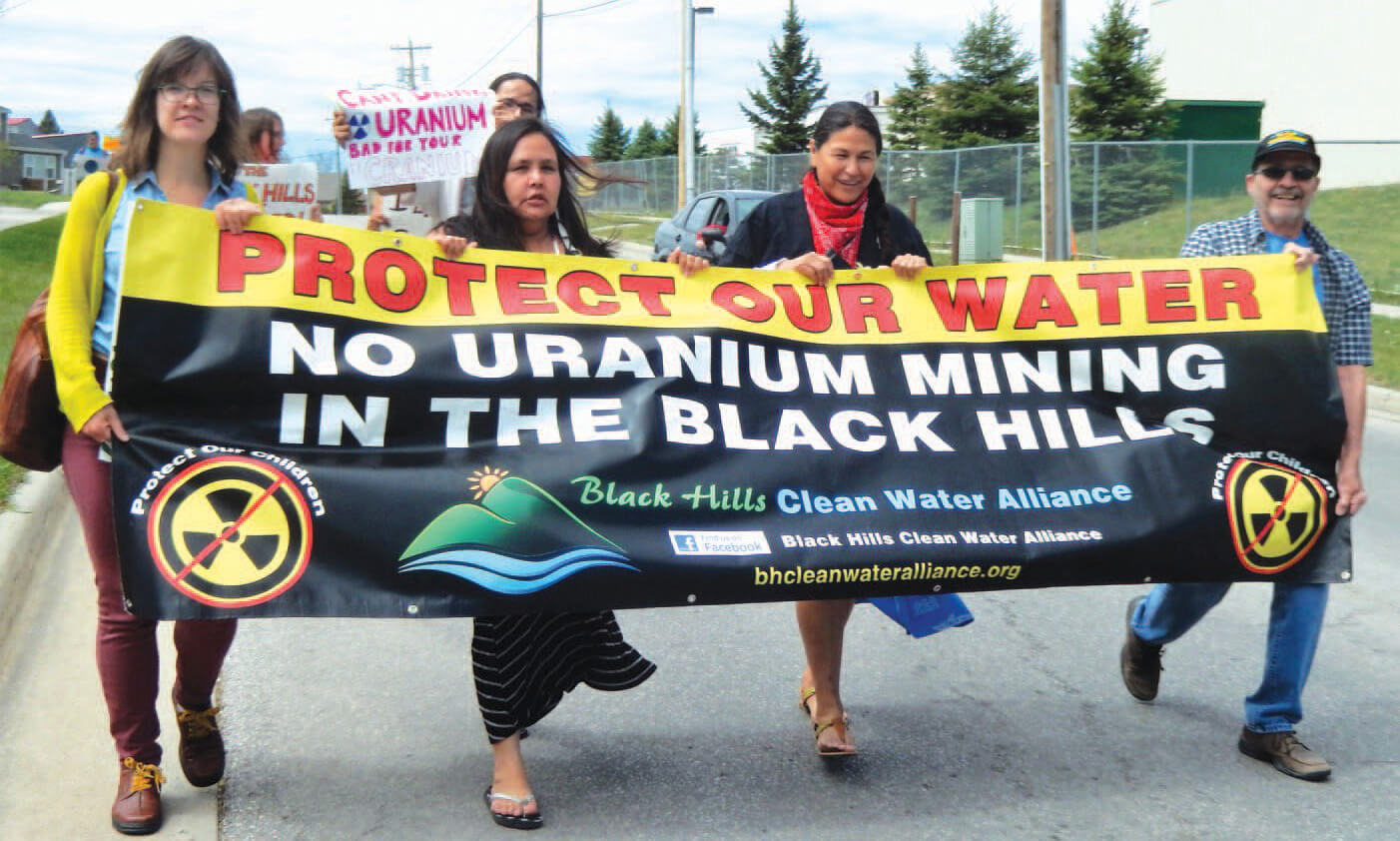 Tribes give resounding NO to EPA questions on uranium mining

About 400 people attended water permit hearings in Rapid City for the proposed Dewey Burdock in situ leach, or ISL, mine and mill that would process yellow cake from uranium dissolved in the aquifers at the headwaters of the Cheyenne River 50 miles west of Pine Ridge Indian Reservation. COURTESY/Stop Line 3
Support our journalism. Become a Patron!

RAPID CITY –– During public hearings on May 8 and 9 tribal members and allies replied with a rotund “no” to the EPA’s questions about whether to allow uranium mining and waste disposal in Black Hills underground water tables.

The hearings took place in response to Azarga Uranium Corp.’s applications for permits to conduct South Dakota’s first-ever uranium solution mining and wastewater disposal in the aquifers underlying 1868 Ft. Laramie Treaty territory. The company requested the EPA exempt it from compliance with the quality standards of the Clean Drinking Water Act in order to proceed.

If the EPA agrees, the company, headquartered in Hong Kong, would be licensed to punch some 4,000 new injection well holes in the Inyan Kara and Minnelusa aquifers at the 10,000-acre Dewey Burdock site located on the headwaters of the Cheyenne River, 50 miles west of the Pine Ridge Indian Reservation and 12 miles north of Edgemont.

Of the more than 80 people who testified over the two-day period of sessions in Rapid City, only two testified in favor of the proposal. The rest received hearty applause from crowds whose numbers added up to about 400.

“The United States of America is absolutely unequivocally nuts — plum crazy – if this is what they plan on doing to earth,” testified Crow Creek Sioux Tribal Chair Brandon Sazue, who warned against releasing the radioactive elements inherent in the mining. “Why is it that you would let a company from across the world drill right here and mess with drinking water?”

Azarga Uranium Corp. has applied for the permits and water quality standards exemption with the argument that it would undertake on-site processing of the uranium dissolved by chemical injections in the water table, using the method of in situ leaching, or ISL, then ship the concentrated product for conversion into atomic fuel rods and nuclear weapons.

EPA Environmental Scientist Valois Shea said the agency issued draft permits and a draft exemption in March to launch a series of five public oral comment hearings and accept written testimony through May 19. “Consultation really has just started with the issuance of these draft permits,” she said.

Under the National Environmental Protection Act, federal authorities are required to arrange government-to-government consultation with tribal officials if cultural resources protected by the National Historic Preservation Act are involved in a project, as in this case, Frazier reminded the EPA staff.

Rapid City resident Lilias Jarding, a PhD in political science and environmental policy, told the EPA, “You can’t start tribal consultation part way through the process. It needed to be completed years ago.”

She warned that the EPA risks a lawsuit over that, as well as for withholding important information from the public and sugar coating the description of the proposed solution mining during hearings.

“I know that the agency is likely to get sued, whether it issues final permits or not, but this one-sided consideration of the situation simply increases the probability of extended litigation – at taxpayers’ expense,” she said.

Only after final permits are issued would Azarga Uranium Corp. be required to carry out underground testing to assure that its geological assumptions guarantee the environmental safety of the project and that radiation or other contaminants wouldn’t get out of control, Shea said.

Kenneth Hargens, a former Wyoming oil-well driller who went to college at the South Dakota School of Mines & Technology, recalled several drilling accidents that caused pollution. He cautioned against permits, saying, “We don’t really know what’s going on under the ground.”

Just as the hearings opened in Rapid City, a ground cave-in occurred at the United States’ largest radioactive weapons disposal site, Hanford Nuclear Waste Reservation in Washington state. Authorities are investigating the cause of the tunnel collapse that exposed buried train cars full of radioactive and chemical debris to the open air.

“This is why we continue to fight,” said Rapid City resident Carla Rae Marshall, a member of the Cheyenne River Sioux Tribe who testified.

Oglala Sioux Tribal Council member Lydia Bear Killer said the tribe has a resolution opposing the mining. “What you guys are proposing here is against our own people. I don’t care how safe you say it is. With uranium, it is not safe.”

Cheyenne River Sioux Tribal Council member Bryce In The Woods testified that Azarga’s predecessor, Canada-based Powertech Uranium Corp., “went belly-up” and noted that his tribe also opposes the project by resolution. Using Lakota language to describe the ISL activity, he translated to say, “It’s some kind of deceit when water is actually medicine and you turn it into poison.”

Several speakers requested Lakota translation and transcripts for the hearings. Several said the limit of five minutes imposed on speakers was too short.

Oglala Lakota state Sen. Kevin Killer testified that the mining project could negatively impact South Dakota’s top economic occupations, agriculture and tourism. “Foreign companies are not going to benefit anybody in South Dakota. There is going to be no local benefit,” he said.

Treaty council elder Floyd Hand said the uranium mining cannot legally proceed because it violates the 1868 Ft. Laramie Treaty, which guarantees the Great Sioux Nation jurisdiction over the proposed project site, opposed by all the Sioux tribes. He noted that Article 6 of the U.S. Constitution classifies treaties as the highest law of the land.

“This is treaty land that we’re talking about,” testified Lakota Margaret Ross. The Black Hills is the center of our creation story, she said. “We’re all speaking for our children, grandchildren and grandchildren who have not even come yet. It’s crazy that you have the decision to let us live,” she told the EPA. “I ask you to listen to us and give us our life.”

Rural Rapid City resident Cheryl Rowe recalled that the project applicant’s local representative, former state legislator Mark Hollenbeck, became a lobbyist for the company, convincing the 2011 Legislature to suspend state supervision of underground water protections, so the proposal would have less regulation. “This was an arrogant and underhanded thing to do to South Dakotans,” she said. “How can we ever trust Powertech Azarga when they have this kind of dishonest intentions?”

Julie Santella, a doctoral candidate in Geology at the University of Minnesota, who is writing her thesis on uranium mining, said the environmental justice considerations addressed by the EPA are too limited.

The agency only considered a 20-mile radius for consideration of impacts on minority and low-income populations, she noted, stating, “The EPA fails to account for potential impacts of this proposed project beyond these geographic boundaries, as well as the way in which environmental fall-out from this project stands to build upon layers of historic environmental injustice experienced by native communities in South Dakota.”

Given treaty history, “the EPA’s analysis is already flawed in saying that the site in question is not located on tribal lands,” she said. “But I am also concerned about the EPA’s failure to recognize that the communities who stand to be harmed by this project have experienced significant historic injustice when it comes to land and resource development. Even if we look only to past uranium projects, we can find a more nuanced understanding of injustice in this region.”

Kai Bosworth, also from the graduate program in Geography at the university, added that environmental justice goals cannot be achieved as required, unless the EPA recognizes “that the expert analysts are the people in this room and not the company proposing the project.” He criticized “using us to complete their project.”

Rapid City resident Gena Parkhurst urged the EPA to deny a Clean Drinking Water Act exemption to Azarga Uranium Corp. to comply with the law prohibiting exemptions where people or livestock drink water from the aquifer, as is the case with the Inyan Kara, where the company proposes to mine.

“It will be impossible to have adequate oversight of the quality of liquid wastes pumped Into the Minnelusa Aquifer through the proposed deep disposal wells,” she added. She noted that the Rapid City Common Council passed a resolution against the project.

The U.S. Geological Survey has found that no ISL uranium mining has been able to return water quality to pre-mining cleanliness, she said. She quoted the U.S. Nuclear Regulatory Commission finding that “the restoration of an ISL-mined aquifer to pre-mining water quality is an impossibility.”

Don Kelley, a retired pathologist living in the Black Hills, said both South Dakota and Colorado physicians’ associations have adopted resolutions opposing any uranium mining in the states, because they “are concerned about any increase of radiation, even if small, as well as the proven and potential of aquifer cross contamination as a significant risk to human health.”

Retired Meade County rancher Marvin Kammerer, who said drought forced him to dig a well 2,260 feet into the Inyan Kara for livestock watering, testified that “the Inyan Kara is a blessed gift and every other one of these bodies of water is too. I am a steward of the land,” he said. “My brothers and sisters, all of them out here, they have to take care of the land. I’m getting sick and tired of corporations coming in here, then they pull out and the Superfund has to take over,” he said.