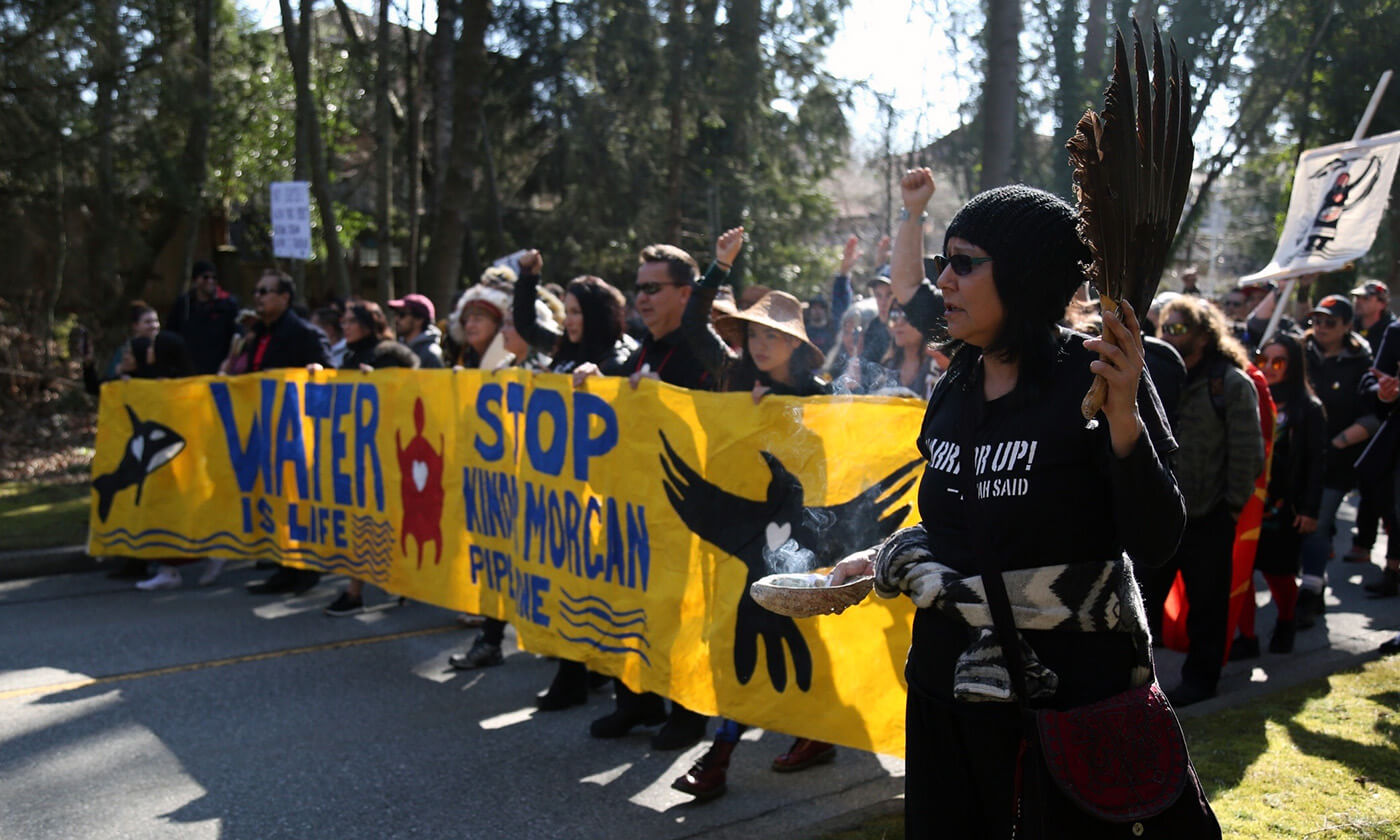 Since the fall, Tiny House Warriors have been putting homes in the path of the pipeline.
Rose Siccana burns sage at the front of the Protect the Inlet rally in metro Vancouver on March 10. Thousands of indigenous leaders and concerned citizens marched in the streets to voice their opposition to the Kinder Morgan Trans Mountain Expansion pipeline, which would more than double the amount of oil traveling from the Alberta tar sands to Vancouver, B.C. Photos by Janice Cantieri.
Support our journalism. Become a Patron!

Editor’s Note: On March 10, more than 10,000 people marched to Burnaby Mountain where the traditional Coast Salish watch house (“Kwekwecnewtxw”) was built. Since March 17, 173 people have been arrested at the gates of Kinder Morgan in Burnaby, B.C. For the first time in history, sitting MPs have been arrested.

At Kwekwecnewtxw, or “a place to watch from,” in Burnaby, B.C., tribal elders are holding ceremonies and keeping watch over the construction of the Kinder Morgan Trans Mountain pipeline expansion. Volunteers began construction of Kwekwecnewtxw, a traditional cedar watch house, on Saturday, March 10. It is the gathering point of Protect the Inlet, a new campaign launched to stop the pipeline.

The Trans Mountain pipeline expansion would more than double the capacity of the existing pipeline that runs from the Alberta tar sands to the Vancouver coast. The construction cuts through unceded First Nations territory and would significantly increase tanker traffic in the Burrard Inlet, threatening salmon and orcas native to the Salish Sea. It was approved by Canada’s Prime Minister Justin Trudeau in November 2016. 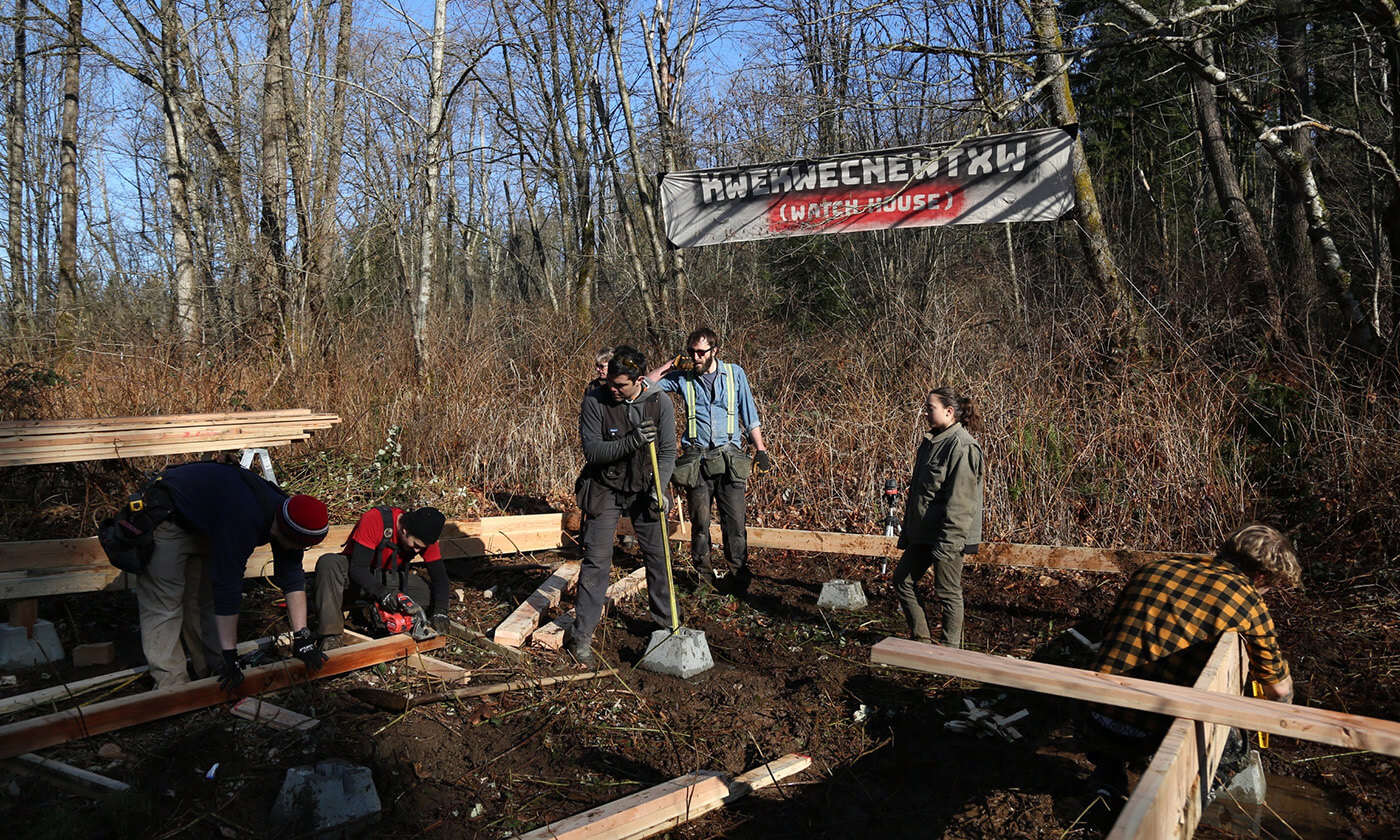 Protect the Inlet is a part of growing indigenous-led efforts to stop construction of the Trans Mountain expansion. Efforts like the recent construction of the watch house build on ongoing work to place tiny houses in the path of the pipeline. These acts of resistance are rooted in traditional cultural values, and they’re also providing benefits for people who would be negatively impacted by the project.

While construction of the traditional Coast Salish watch house began on Saturday, thousands of indigenous leaders and concerned citizens marched in the Vancouver, B.C., metro area. Canadian police estimated that over five thousand people attended. March organizers put that number between 8 to 10 thousand.

At the protest, indigenous leaders representing nations throughout Canada and across North America stood in solidarity with communities along the pipeline’s route. 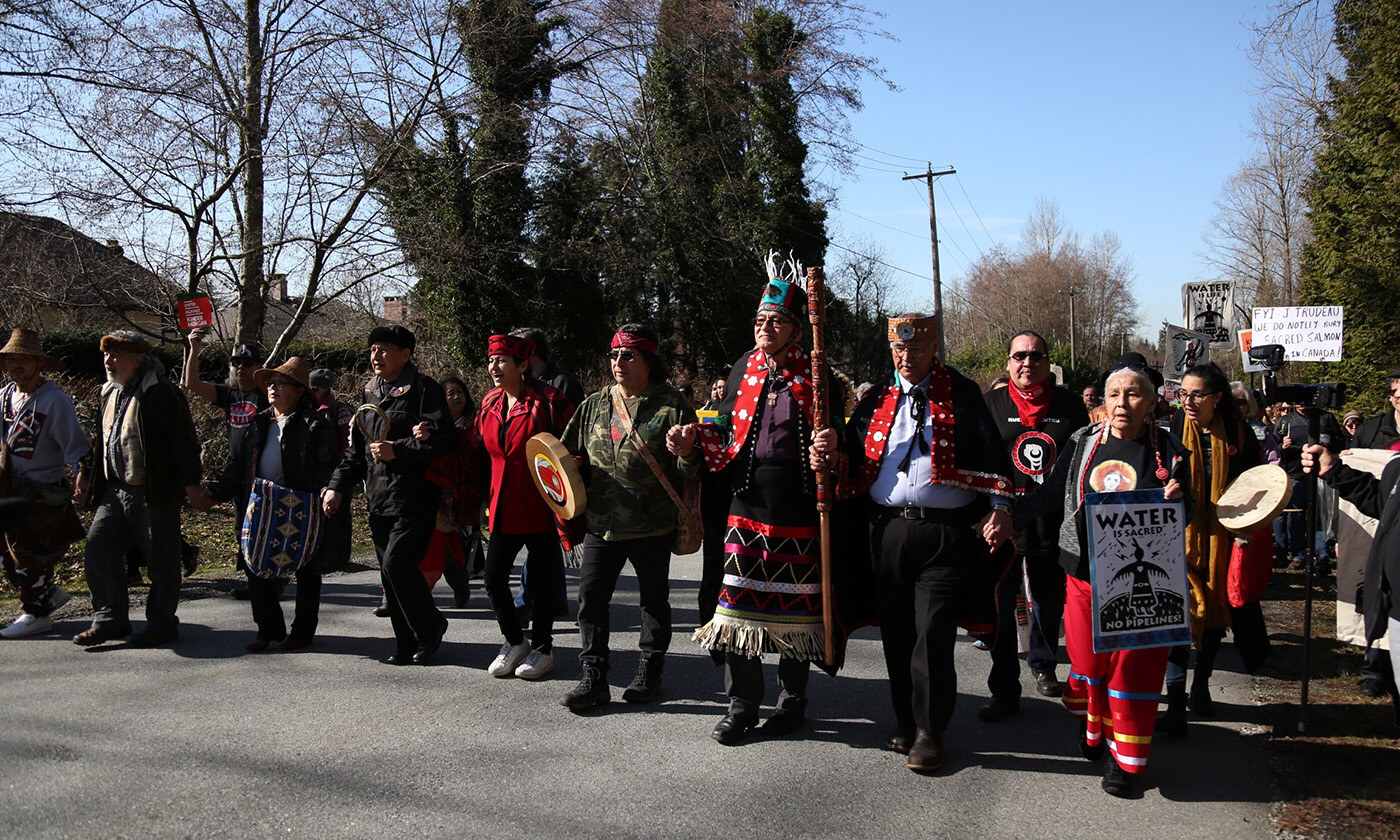 “When it comes to the Kinder Morgan pipeline project, our nations are deeply, deeply concerned about the impact that this will have on our rights as a people today and the rights of people to come,” said Dustin Rivers, elected councilor with the Squamish Nation. “Our people have lived here for thousands of years, and we will continue to do so for thousands more. But we cannot sit by idly and let this project … threaten our livelihood, our lives, our territory, our waters, and our culture.”

“It’s very important that we take it back to our old teachings.”

The “Coast Protectors” who marched on Saturday gathered for a rally near the construction site to hear speeches and songs from First Nations representatives across Canada and the U.S.

“We’ve been in court with this matter eight years now, and within the last few years we came up with the idea [to build the watch house],“ said Will George, spokesman for Protect the Inlet and member of the Tsleil-Waututh Nation. Traditionally, Coast Salish people had watch houses “set up at locations for centuries so that we could look out for any threat that comes towards our land or our waters.”

George said his spiritual leaders and elders asked him to build the structure.

“It’s very important that we take it back to our old teachings,” he said.

After the march, tribal elders were invited to enter the watch house and bless the structure, which was built directly over the existing Trans Mountain pipeline. Starting on Saturday, members of the Tsleil-Waututh Nation will occupy the structure.

“Having a watch house on this location is sending a strong message to Kinder Morgan that this pipeline won’t be built,” George said. 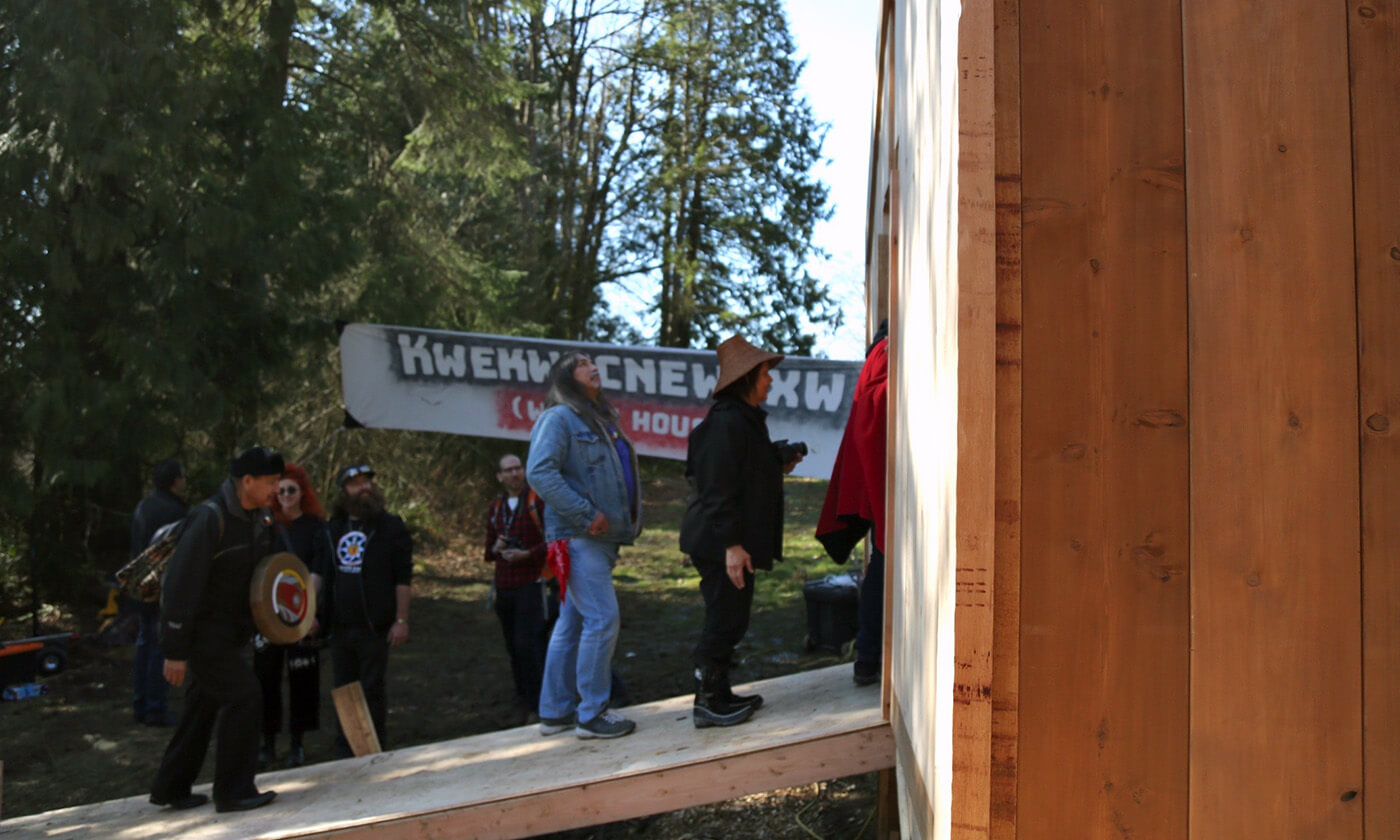 Kwekwecnewtxw isn’t the first structure to be built in the path of the pipeline. Since the fall, Native women have been leading efforts to build and place tiny houses in the path of construction throughout the 322-mile pipeline route.

The Tiny House Warriors project was founded by indigenous environmental and women’s rights activist Kanahus Manuel of the Secwepemc and Ktunaxa Nations.

“Right now we are working in collaboration with other indigenous communities to build 10 of them on the Kinder Morgan pipeline. There are three of them built so far, we’re going to be deploying them soon,” Manuel said. “These tiny houses will be strategically placed in the path of any construction that’s threatening our food harvesting grounds, our medicine harvesting grounds, our sacred sites, or our ancient village sites.”

Manuel, an indigenous artist and activist, said she was inspired after seeing a tiny house constructed at the Standing Rock demonstrations against the Dakota Access pipeline in North Dakota in 2016.

“Canada is not abiding by the United Nations Declaration on Indigenous Rights.”

“A big part of our campaign is to build a culture of resistance through art and tiny house building is a creative art project, it’s creating solutions, and it’s not being a part of the problem. It’s showing that we can downsize and have an impact on our footprint on the environment,” she said.

In addition to serving as a powerful act of resistance, the houses are also helping solve housing challenges for Canada’s native families, many of whom struggle to pay off the mortgages on the reservation homes the government placed them in, Manuel said. And because the homes are on wheels, they are also reviving her communities’ nomadic hunter-gatherer lifestyle.

“We lived in traditional underground pit houses and cedar bark lodges, so we always have lived in tiny houses; it’s nothing new for us,” she said. 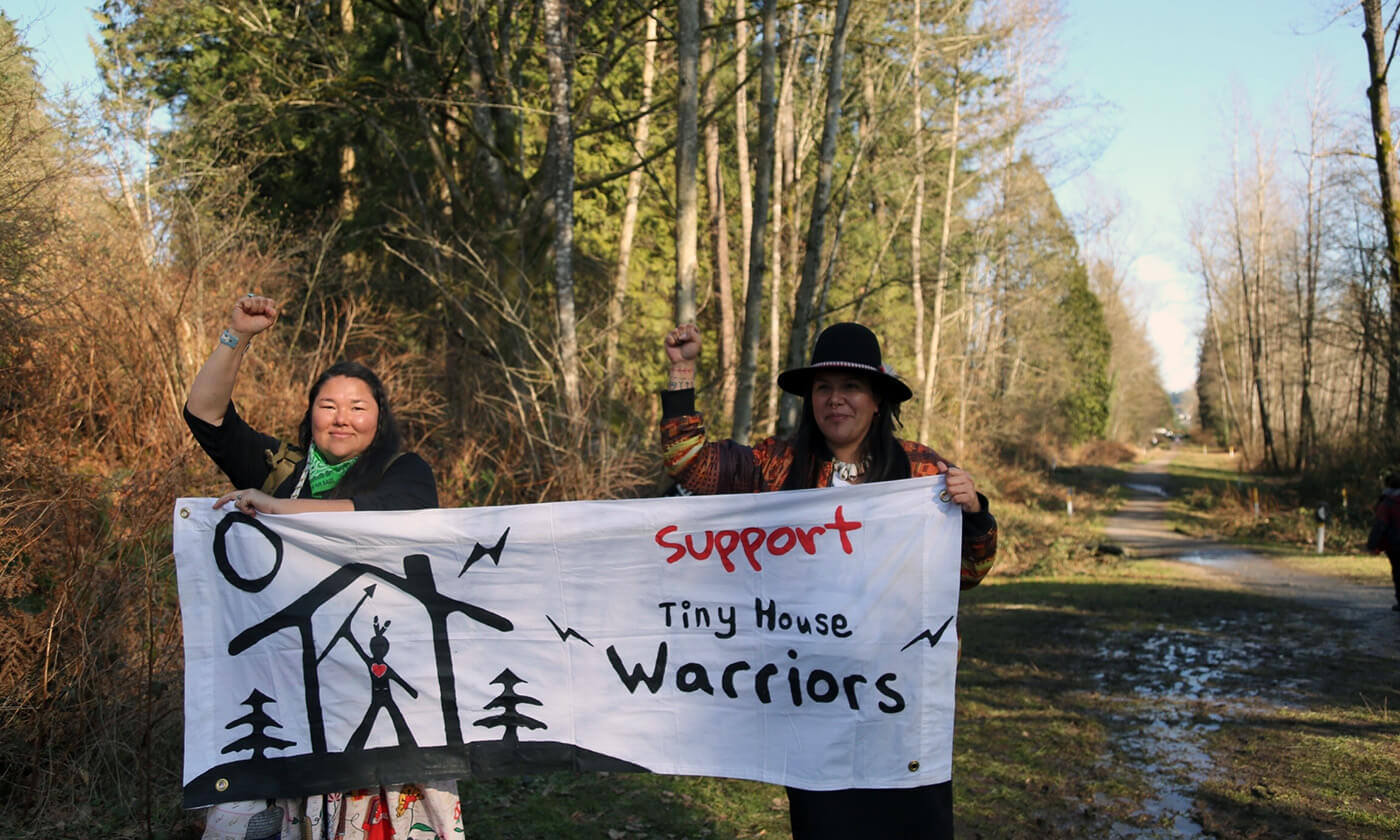 Linda Black Elk of the Catawba Nation and Kanahus Manuel of the Secwepemc and Ktunaxa Nations at the March 10 rally in Burnaby, B.C. Manuel founded Tiny House Warriors, which is building and placing tiny homes along the Trans Mountain pipeline expansion route. The tiny homes are solar-powered, on wheels, and have composting toilets. Photo by Janice Cantieri.

The homes will be covered with vibrant indigenous murals and outfitted with wood-burning stoves, solar power, and composting toilets. And their inhabitants will serve as guardians and land protectors along the pipeline route.

Earlier this year, the Tiny House Warriors brought the first completed tiny house directly in front of the Toronto-Dominion Bank in downtown Vancouver to encourage the bank to pull its investments from the Kinder Morgan pipeline. The Protect the Inlet campaign is planned to continue indefinitely, until the investors pull out from the project.

This article was originally published at Yes Magazine. It has been re-published at IC under a Creative Commons License.