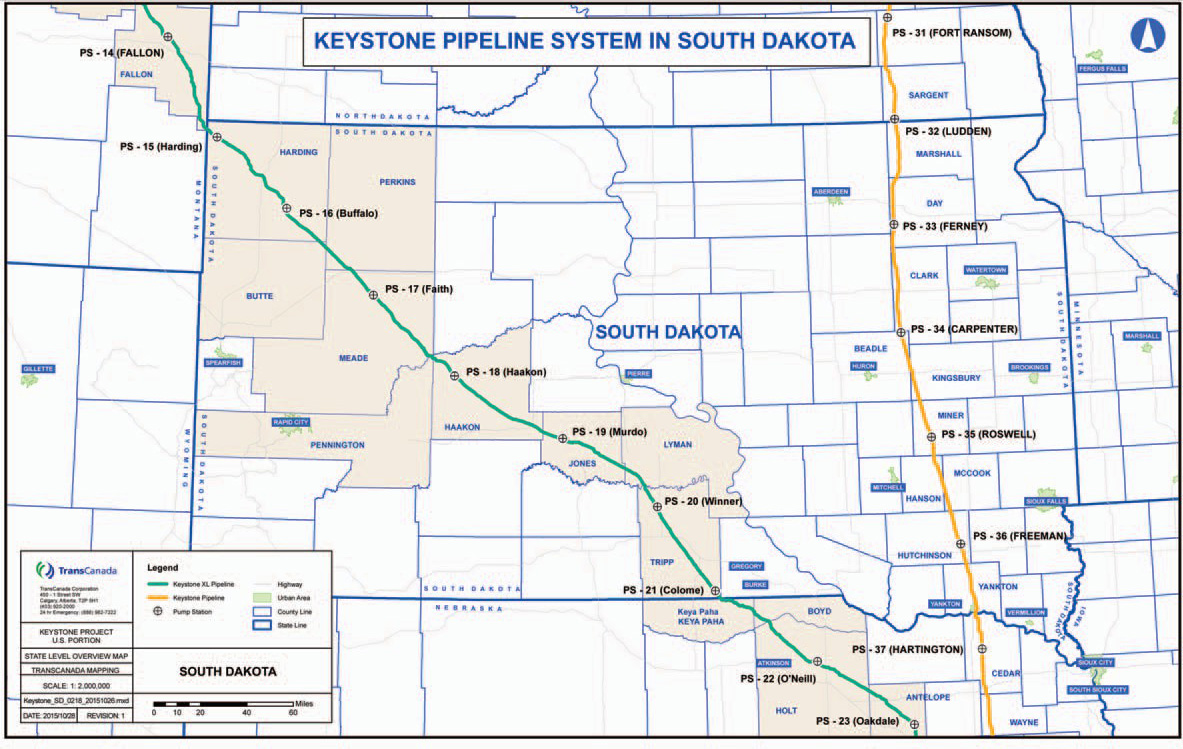 The corporation, based in Calgary, Alberta, sought South Dakota Public Utilities Commission, or PUC, approval in 2009, securing a permit in 2010 for the line to ship tar-sands crude-oil from Canada to Texas refineries and export facilities on the Gulf of Mexico.

The appellants, together with other tribes and individuals, have worked to ward off the construction since then, leading up to a June South Dakota Circuit Court ruling that affirmed the validity of the PUC permit renewal in January 2016 and triggered the appeal.

“We are in the right, and we all pretty much agreed we need to finish what we started in terms of protection of the land and water for our own use, instead of the private gain of a corporation screwing the property owners with their low easement payments,” said Dakota Rural Action President John Harter after the board of directors’ unanimous vote to appeal.

Intertribal COUP Secretary Bob Gough said the appeal questions the lower court ruling for allowing the PUC to exclude testimony on the pipeline’s climate change impacts and other issues.

“In South Dakota, constitutional law says corporations cannot use eminent domain to infringe on the equal protections of individual property owners, and it also says it can’t be used to infringe on the general wellbeing of the state,” Gough told the Native Sun News Today.

“We think the impacts are going to be devastating on ranch and farm families in eastern and western South Dakota,” he said. “All we are asking is the PUC look at tarsands burning and consider it. The atmosphere can’t take that.”

In the immediate past Administration, former U.S. President Barack Obama deemed the pipeline would not be “in the national interest” because it would facilitate the transportation of what Secretary of State John Kerry labeled “one of the dirtiest sources of fuel on the planet.”

Kerry denied the Presidential Permit for the construction of KXL across the Canada-U.S. border in November 2015, saying, “The United States cannot ask other nations to make tough choices to address climate change if we are unwilling to make them ourselves. Denying the Keystone XL pipeline is one of those tough choices – but it is the right decision, for America and the world.”

The Cheyenne River Sioux Tribe, a party to the Circuit Court challenge of the PUC decision, unsuccessfully argued that granting a state permit before the federal permit was in place was illegal.

U.S. President Donald Trump campaigned on a promise to reverse the previous Administration’s federal permit decision and early in 2017, his State Department granted the permit. A Nebraska state permit remains to be obtained, with public hearings set for the entire week of Aug. 7, in Lincoln. The line has been constructed between Texas and Kansas. Montana has granted a permit.

The Nebraska Public Service Commission has more than 90 intervenors registered to challenge application of the doctrine of eminent domain, along with 30 other Nebraska residents, the Ponca Tribe of Nebraska, Yankton Sioux Tribe, Bold Nebraska, Sierra Club, 350.org and Oil Change International.

Lauding the latest appeal, Indigenous Environmental Network’s Keep It in the Ground Organizer, Dallas Goldtooth, said, “its great news! I’m hoping the Supreme Court will see the lunacy of having a standing state permit when there are a number of other legal challenges to KXL.”

South Dakotans, Nebraskans, and tribal representatives of Lakota Territory “have been leading this fight,” he told the Native Sun News Today.

Initially, opposition to the PUC permitting emerged mainly among non-Indian ranchers, Dakota Rural Action West River Representative At Large Paul Seamans recalled. Since then, “native people and tribes have taken weight on,” he said in a telephone interview.

Like Seamans, Harter’s ranch would be compromised by the leases TransCanada Corp. obtained by PUC acceptance of the application of the doctrine of eminent domain to condemn individual property holdings.

“We basically were forced to accept the pipeline,” Harter said in a telephone interview. “There were no fair and good faith negotiations. Everything has been done under duress.

“I don’t like being cheated and lied to and being forced to go into business with a thief and a liar,” he added.

Several years ago, Harter was present when tribal leaders from Canada and the United States gathered on the Rosebud Sioux Nation to sign a treaty opposing the pipeline, he recalled. “That’s one of the first places we heard that we are the new Indians,” he said.

The tribes and members have been fighting land grabs ever since before the U.S. violation of the 1851 Ft. Laramie Treaty that guaranteed the Oceti Sakowin, or Seven Council Fires of Great Sioux Nation, jurisdiction over the route the KXL would cross, Gough reflected.

“The pipeline route goes through the original old boundaries. It is a trespass on the lands of the Great Sioux Nation,” he said. In addition, it would span the 1889 incorporated area of the Rosebud Sioux Nation and its trust lands, he noted.

Also, he said, “At Intertribal COUP, we don’t think it is right to use eminent domain because this is not a public carrier; there is no place in South Dakota to get that oil on or off the pipeline,” he said. “The only oil that South Dakota is going to get is the oil that’s going to leak.

“We’re going to get only two permanent jobs on the pipeline, but a lot of jobs cleaning up spills.”

TransCanada Corp.’s Keystone I Pipeline, which runs through all the eastern counties of North and South Dakota and Nebraska spilled at least 14 times in its first year of operations, in 2010. A larger spill from that line near Freeman, which occurred more recently, remains to be cleaned up after months of excavation.

The new line would cross several rivers and the Min Wiconi Rural Water System supply route in South Dakota. It is one of several slated for the Northern Great Plains and southern Canada.

This article was originally published at Native Sun News. It has been re-published with permission.