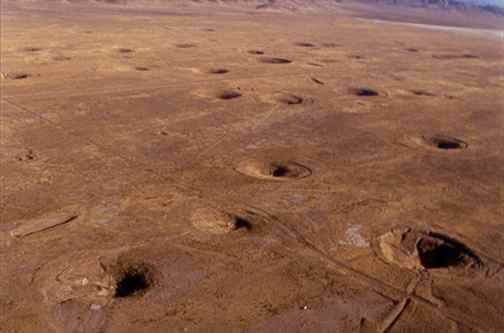 Trailer for the film: Trespassing

By focusing on the Native American struggle for spiritual and cultural autonomy on disputed lands in the U.S. Southwest, “Trespassing” unpacks a deadly political and ethical controversy around land rights, uranium mining, nuclear testing and the disposal of nuclear waste, and examines the ability of a culture to bring itself to the brink of annihilation while simultaneously producing “gatekeepers” to combat that annihilation.

Review of the film, by Brenda Norell

May 10, 2006 – ”Trespassing,” censored in more film festivals worldwide than it has been shown, reveals how the Colorado River Indian Tribes, Fort Mojave, Western Shoshone, Pueblo and Navajo were targeted by the nuclear industry.

Stewart Udall, former Interior Department secretary under presidents John Kennedy and Lyndon Johnson, appears in the film and calls for honesty from the United States regarding the mistakes of the Cold War and Atomic Age. Udall points out that Americans were told to trust those in power concerning radiation and uranium.

”Well, it turns out – and we’re learning more and more about it – that they made mistakes. And they lied. And now we have to confront this with the legacy of the Atomic Age. And that includes radiation, the waste, the dumps, the people that were harmed; and I think we have to demand the truth.”

Truth and censorship have become the key words in the making and distribution of ”Trespassing.”

The film exposes the Cold War machinations of the nuclear industry, resulting in widespread cancer and respiratory diseases for Pueblos and Navajos working without protective clothing in Cold War uranium mines.

”Trespassing,” by Red Umbrella Productions, captured the Trustee Award at the 15th Arizona International Film Festival April 28, an award based on merit, which is not given out annually.

In the United States and worldwide, however, the film has been rejected by more film festivals than it has been accepted. (read the full review)