Traditional Owners Speak Out: No Nuclear dump in NT 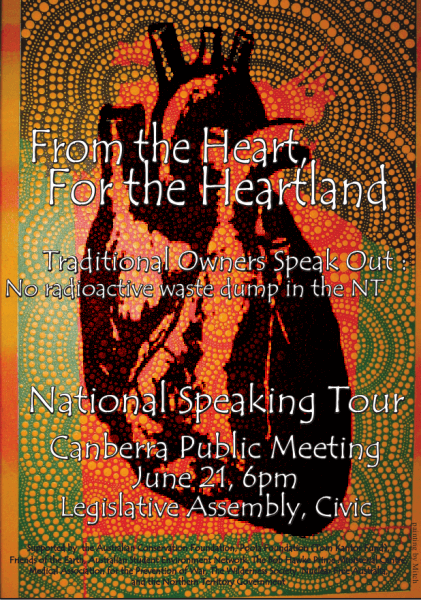 Indigenous traditional owners and community members from areas the Government has proposed for new Nuclear Waste dump sites, have recently begun a National speaking tour to express their concerns over how these dump sites would cause irreversible damage to the land. Aswell, to inform people that the areas—which the government has assured are “some distance from any form of civilisation”—are in fact not uninhabited.

From the Canberra event poster:

1. Mt Evard – 40kms NW of Alice Springs.
3 km from the proposed dump site WerreTherre community runs several business enterprises, including mustering wild horses and conducting cultural education on country for school children. Arrente Traditional Owners Audrey McCormack and Benedict Stevens will travel on this Speaking Tour. “I’d like to keep the place clean for my children my grandchildren and further generations.. we go out hunting there, we go for our bush tuckers” – Audrey McCormack

2. Harts Range – 165kms NE of Alice Springs.
Engawala community and Aboriginal owned Alcoota cattle station are only 18kms north of the proposed site. Arrente women Mitch and Priscilla Williams are speaking out. If this nuclear waste is so safe, why can’t they keep it at the Lucas Heights nuclear plant in Sydney, where it is produced and where the nuclear experts work? We stand strong in our own culture as Indigenous people, and want the land and water to be protected for all children, black and white. We have enough issues of our own to deal with without having to deal with the nuclear waste” – Mitch

3. Muckaty Station – 120 kms north of Tennant
Creek. Though not one of the sites currently undergoing assessment, there has been much speculation about Muckaty being offered as
an alternative. The Northern Land Council, in conjunction with the Federal Government, has been encouraging Traditional Owners to nominate their land as a site for the waste dump. Warlmanpa woman Dianne Stokes will be sharing her stories with you. “Whoever is taking this waste dump into our country needs to come back and talk to the Traditional Owners. We’re not happy to have all of this stuff. We don’t want it, it’s not our spirit. Our spirit is our country, our country where our ancestors been born. Before towns, before hospitals, before cities. We want our country to be safe” – Dianne Stokes

From the Heart, For the Heartland

Here’s a letter I received in my email from Mitch.

To the Traditional Peoples of Adelaide, Melbourne, Canberra and Sydney. We respectfully seek permission to come to your land and talk up about what is happening to the Northern Territory Indigenous peoples.

As you may be aware, the Commonwealth Government is forcing the NT to locate a radioactive waste dump on our lands. Aboriginal people from the NT have been fighting for a few years now to stop the waste dump and feel we must go south to talk stronger and maybe louder for others to hear and see what we are trying to stop.

I have sought my Elders’ permission to talk up and was given the right to talk. I am from Alcoota, a community not far from the Government’s proposed Harts Range dump site and my name is Mitch. I will also be bringing my bush sister Priscilla Williams who lives at Harts Range. Traditional Owners Audrey McCormack and Benedict Stevens from Mt Everard, just outside of Alice Springs and Muckaty Traditional Owner Dianne Stokes will also be accompanying us because the Government is trying to force the waste dump on to their land as well. Donna Jackson from Larrakia Nations’ in Darwin will come because the movement of uranium and waste through their port will have a great impact on the northern coastline.

All Traditional Owners at each proposed waste dump site have said a resounding NO to the Commonwealth Government as well as the Northern Territory Government but to no avail, as laws were changed to exclude us. Community consultation has been poor and carefully orchestrated to trick us, or to mislead us. We have raised concerns about the impact on bush tucker, underground water contamination and poison in the wind or rain. We ask about the time it will take for the poison to no longer be poisonous and feel we can’t make a decision today that will affect our children’s children’s future.

We ask again with the deepest respect to come on to your lands to talk our stories and gather as one to stop the Commonwealth from going down the uranium road as it will have long term, damaging effect on the Northern Territory Indigenous peoples and the wider community. As I write, Family are gathering gifts to hand on to you as a sign of respect and solidarity between our Nations. If you were to welcome us we would be grateful and we would not be alone in this fight for our lives. And our unborn grandchildren will have a future in the Northern Territory.

For more information on this issue, please visit this page on FOE, as well as nukefreeaus.org. Thanks Lee Ann for passing this on