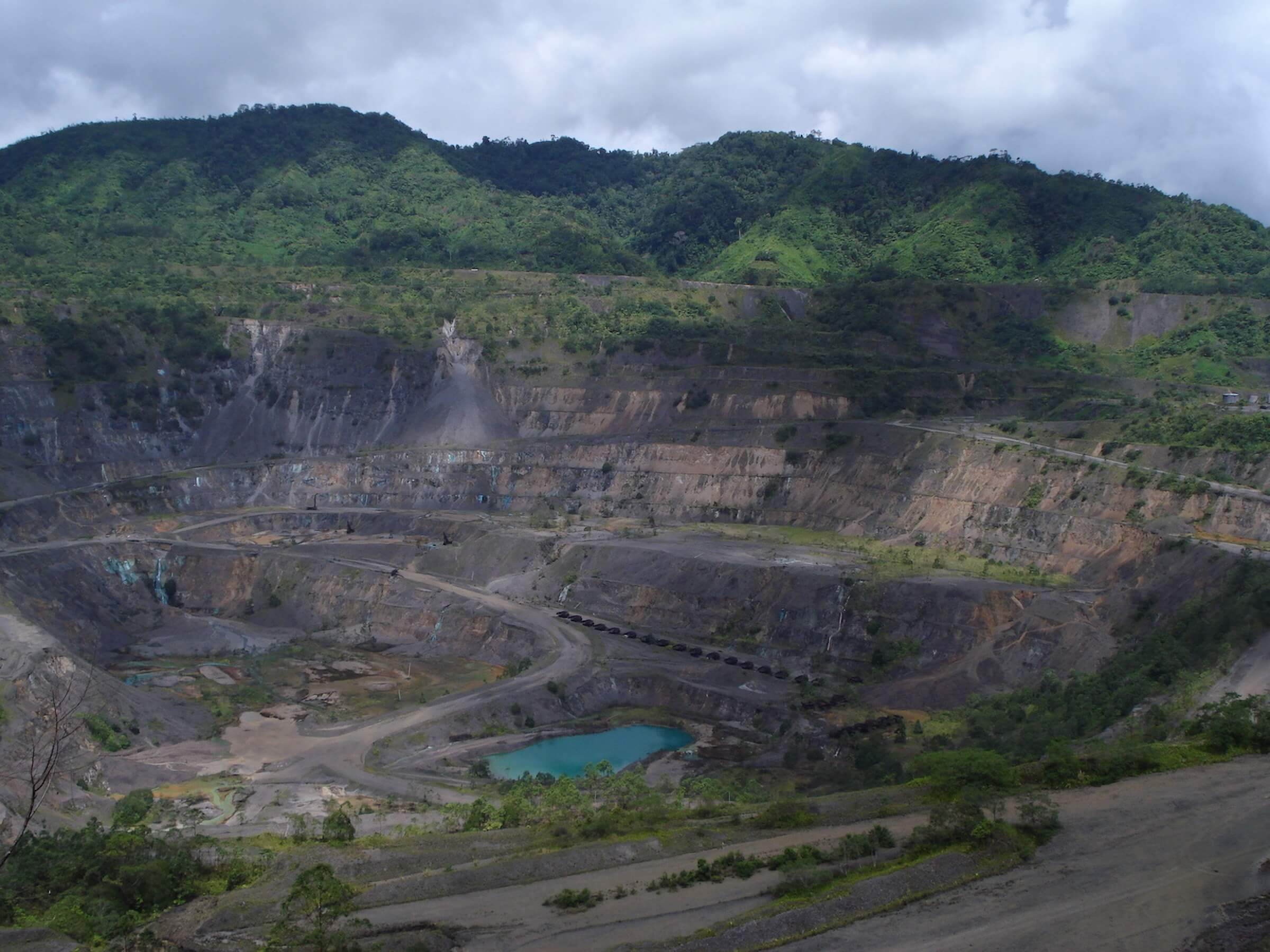 The abandoned Panguna mine pit, as it is today. Photo by Catherine Wilson.
Support our journalism. Become a Patron!

Ahead of next year’s referendum on independence from Papua New Guinea, the government of the autonomous region of Bougainville believes reopening the Panguna copper mine is the key to gaining economic self-sufficiency.

In January, traditional landholders rejected a bid by Bougainville Copper Ltd. — now majority owned by the Bougainville and Papua New Guinea governments — to renew exploration at the mine.

The dispute of the mine highlights the ways in which traditional communal landownership in Melanesian states complicates both public and private development projects — and the role landowner groups can play in environmental stewardship.

Traditional landowners in Bougainville, Papua New Guinea, have exerted their power of veto under the autonomous region’s new mining laws and rejected a corporate bid by Bougainville Copper Limited (BCL) to embark on renewed exploration at the war-ravaged Panguna copper mine, which has been dormant for 28 years.

New legislation introduced in 2015 gives them ownership of any mineral resources on their land, as well as rights in key decisions about their exploitation.

At the core of concerns by many indigenous landowners is the company’s record on environmental and social responsibility. BCL, a former Rio Tinto subsidiary, operated the mine at the time civil war broke out in the late 1980s — a conflict sparked by claims of extensive environmental damage and inequities connected with its operations. Two years ago, the global mining multinational sold its stake in the mine and, at the same time, dismissed any obligation to clean up or rehabilitate land and rivers contaminated with mine waste.

The landowner vote in January was not, however, unanimous, with evidence of opposition from some landowning groups and support from others. Bougainville’s president, John Momis, then imposed an indefinite moratorium on mining in Panguna. He expressed concerns that the depth of local division on the issue could trigger tensions, even unrest, and undermine the region’s progress toward a referendum on independence set to be held on June 15 next year.

Although the Bougainville government has a 36.4 percent stake in BCL, Momis told Australia’s ABC News in January that “If we went ahead now, you could be causing a total explosion of the situation again,” referring to the devastating war on the island from 1989 to 1998 that left some 20,000 people dead.

Nevertheless, debate about reopening the Panguna mine is unlikely to dissipate, as mineral extraction is believed by local leaders to be the only feasible economic option for driving the region’s fiscal self-reliance alongside ambitions of self-determination. Other companies with rival bids to redevelop the Panguna mine are also waiting in the wings, including Australia-based RTG Mining, which has forged an alliance with local Mekamui tribal leaders.

The abandoned Panguna mine pit, as it is today. Photo by Catherine Wilson.

Bougainville’s history of resource extraction and conflict has been affected by some unique factors, including the long-held desire for secession in the region, which contributed to the widespread unity of landowners and the scale of their mobilization and resistance to the foreign-led extractive venture.

However, in common with other Melanesian island states, such as the Solomon Islands and Vanuatu, it is a prime example of how customary landownership, which covers over 80 percent of these countries, can have a crucial influence on a wide range of public and commercially driven development projects.

Friction between differing worldviews about the value of land is at the heart of localized conflict related to mining in Bougainville, but also at the Porgera gold mine in Papua New Guinea’s remote Enga province, and the massive PNG LNG natural gas project in the highlands.

For companies from the industrialized West, where laws endorse the rights of individual land tenure, land is a major source of commodities for generating profits and corporate or personal wealth. But for Melanesian societies, the centuries-old system of customary landownership is communal. Land is owned not by individuals but by clans and family groups, who are considered custodians until it is passed on to the next generation.

The right to use land by members of landowning groups, whether for agricultural cultivation, building homes, hunting, or worshiping ancestors, reinforces social structures held together by mutual kinship obligations and ideas of collective social security. Traditionally held land is, therefore, entwined with social harmony and cohesion.

Intensified interest by export-oriented foreign resource-extraction companies in Papua New Guinea in the mid-20th century heralded an era of confrontations. Their ambitions often encountered major hurdles in countries where land was not surveyed or registered and no single individual was traditionally entitled to sell it.

In communities affected by the PNG LNG project in the Papua New Guinean highlands, for example, claims that individuals have been incorrectly named as beneficiaries in landowner identification programs have been a factor in regular episodes of disrupted operations and localized violence in the past eight years. In a country where customary laws and land rights are oral and undocumented, the risk of incorrectly identifying landowners and the potential for opportunists to hijack the process for their own reward is very high.

Obtaining rights to customary land to build infrastructure and improve much-needed public services in Pacific island states, such as water, power, communications and transport, can also involve lengthy negotiations with traditional owners. And delays, work stoppages and disruptions to projects easily follow when there are disagreements about the activities involved, the social and environmental impacts, or the nature and amount of compensation to be paid to landowners.

This is a growing problem in expanding cities and towns, such as Port Moresby, the Papua New Guinea capital, where the demands of urban development are matched by the growing need for more land.

In Honiara, capital of the Solomon Islands, the civic water supply has been disrupted on numerous occasions because of disputes over compensation with the owners of the land where the Kongulai water catchment, the supply’s source, is located. 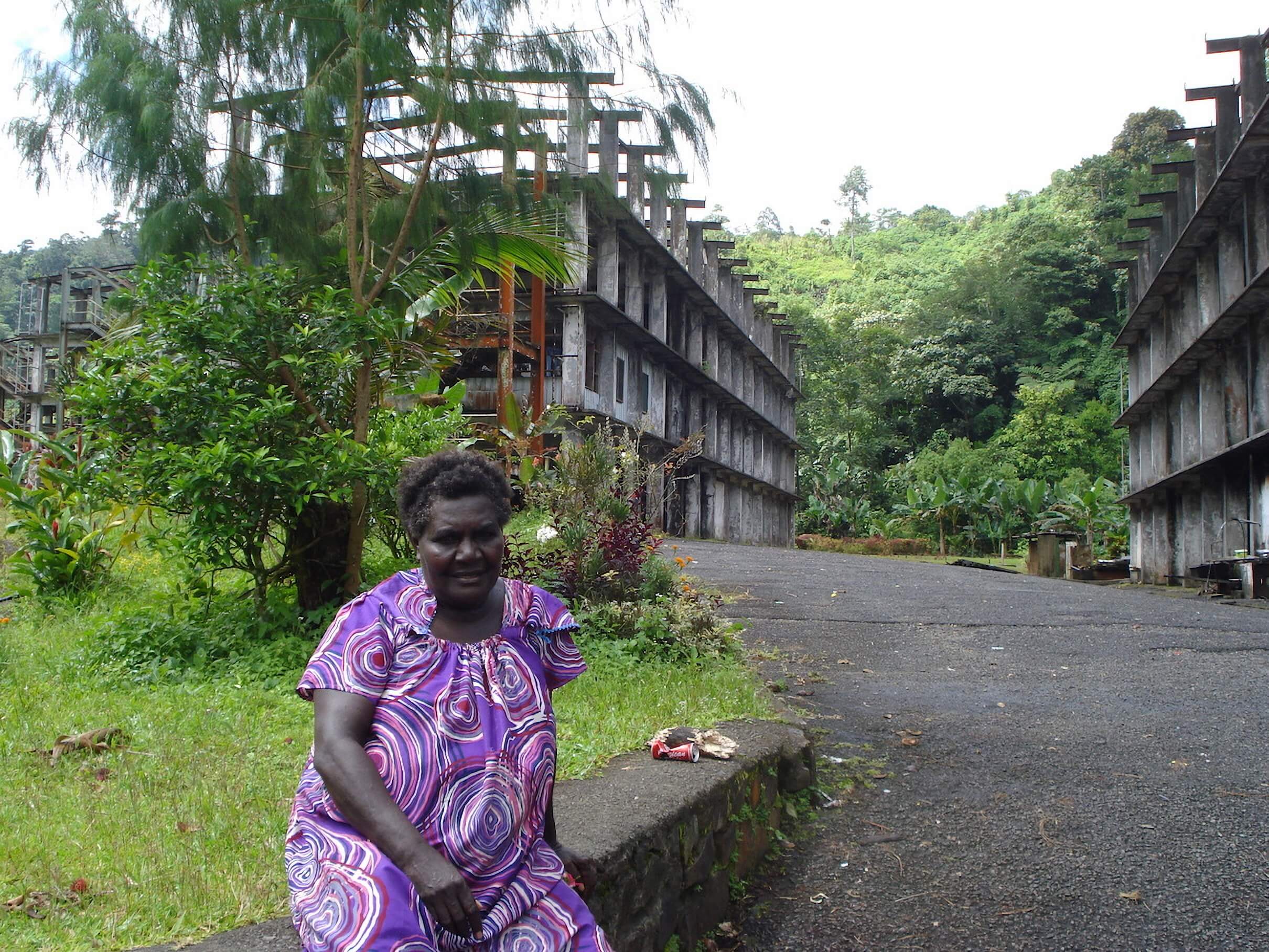 Local Panguna landowner, Lynette Ona, believes Bougainville islanders were at the forefront of the global environmental movement in the 1990s. Photo by Catherine Wilson.

Yet, at the same time, the culturally entrenched role that customary landowners perform as “custodians of the land” could be seen as aiding environmental protection. In Panguna, it was the landowners who called for action on deforestation, soil erosion, crop degradation and the pollution of rivers and streams.

Panguna landowners Phillip Takaung and Lynette Ona believe the campaign they waged in the 1990s put them at the forefront of the then-burgeoning era of global environmental activism. “This is the first island in the world where we fought for the life of the people and for the environment,” Takaung said during an interview at the mine in 2016.

There is an increasing call by governments in the region for greater mobilization of land as part of their larger aim to boost human development and standards of living. But there remains little will for land reform at the local level. Many clans and families still view land as vital for their economic and social survival, now and in the future. And the long connection between local governance and landownership means that many chiefs and local leaders see external government and political control as unwanted interference and, in some instances, motivated by intentions to wrongly “steal” their land and its wealth.

This has been a major issue in Papua New Guinea, where the government’s Special Agriculture and Business Lease (SABL) program has fallen foul of manipulation and corruption. This attempt to free up traditional land for economic projects resulted in 12 percent of the country, or 55,000 square kilometers (21,200 square miles), being allocated mostly for logging by foreign companies, rather than agricultural projects to benefit local communities.

There are exceptions, such as the recent national land reform initiative in Vanuatu, which gained popular support. In a bid to reduce land-related disputes, conflict and fraud, and provide better governance of investment and development projects, the Vanuatu government introduced new laws in 2014 aimed at strengthening and integrating the rights of traditional landowners with government planning and oversight institutions. Time will be needed to judge their effectiveness.

This article was originally published at Mongabay. It has been republished at IC under a Creative Commons License.