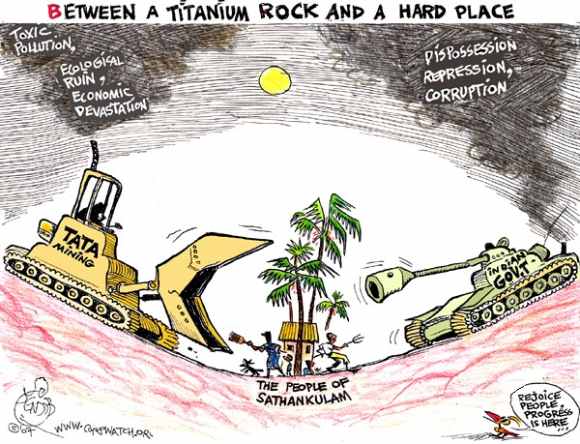 More than 5,000 people converged last month in the Indian state of Tamil Nadu to protest a deal made by the state government to appropriate nearly 10,000 acres of land and hand it over to the India-based Tata Steel Corporation.

Upon doing so, the giant transnational company would then gain the right to mine ilmenite (which yields titanium metal and titanium dioxide when processed–both extremely valuable materials.) in Sathankulam, an agrarian pocket of India’s coastal countryside.

The locals however – farmers, the indigenous, and business people are opposed to this deal out of a fear that the mining operation and significant loss of land will destroy their traditional way of life and despoil the environment for generations to come.

The Familiar Cost of Business

According to a recent in-depth report by Corpwatch, “as currently envisioned, the mining project involves land spread over six villages in Sathankulam, a 24-square mile area about 35 miles from the southern port city of Tuticorin; Tata hopes to expand by an additional 12 square miles over a 30-year period.”

“The complex operations will include a mineral processing plant to produce titanium dioxide pigment and a coal-fired thermal power plant. A seawater desalination plant to supply 16 million liters a day of fresh water, is planned for Kulasekarapattinam, a seaside fishing hamlet about 12 miles from the mining site. Tata will also set up tailing ponds that will hold up to 85 percent of the material mined in the form of slime (very fine sand) and coarse sand…” “Each year, Tata plans to remove 500,000 tons of ilmenite-rich sands, with 53 percent titanium dioxide, from slightly more than half a square mile.”

At first glance, the danger here is quite clear. First we have the people living in the region, some 100,000—all of whom would be displaced before Tata even gets started. After that, operations can begin, which is when things start getting ugly.

According to the U.S. Environmental Protection Agency, titanium is a mineral ore known to have TENORM-associated wastes, which means it has natural radioactive content that is increased by using technological processing techniques, such as using acid leaching, solvent extraction, electro or pyro or magnetic processing, or intensive use of water.

Fully acknowledging this, Tata states that every 100 tons of heavy mineral sand isolated from the sand will yield about 53 tons of ilmenite and 5 tons of radioactive monazite… all of which will be returned to the mining site along with sand tailings and slime.

There are numerous other toxic dangers as well. For one, Tata intends to use a pollution-intensive method of extraction involving chlorine, which according to the United Nations Environment Program, creates dioxin, a potent carcinogen that magnifies up the food chain to affect birds of prey, large fish and humans.

Add all of this together and we come to see how the land will be devastated. The existing environment, on which some 40,000 of the to-be-displaced depend on for subsitence farming–will be unusable; and the agrarian culture on which the indigenous people have been a part of for generations, will be no more.

The biggest local concern however, according to corpwatch, ” is water. Located in a rain shadow region, the area receives sparse rainfall. Farmers, though, swear by the Theri sands that “are like sponges. They store water during the rains, and release it during dry seasons,” says G. Sivaganesakumar, a farmer in Naduvukurichi, a village that sits in the project area. “It doesn’t matter what the price of the land is. It doesn’t matter whether Tata mines the land or the government does. What matters is that if it is mined, the titanium will disappear in 30 years. If not, the land will yield water forever. You decide: Titanium or Water?” Read the full report by Corpwatch here.