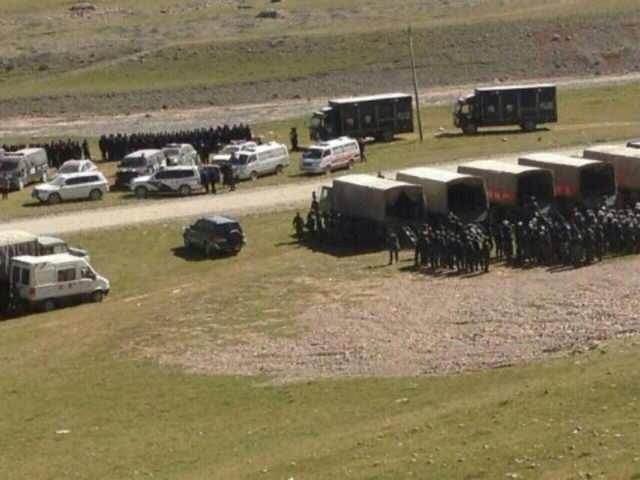 Over a hundred Tibetan protestors were injured during a government crackdown on a peaceful protest against mining in the Yulshul County, Kham region of eastern Tibet earlier this week. Eight Tibetans were detained, with six later being released, and one man committing suicide.

Two other Tibetan protest leaders—Ketsa  Sodor from Atod and Gyaltsen from Dzachen—have now “disappeared,” according to a source of Radio Free Asia. “They were both threatened with detention, and later they disappeared. Both of them were the heads of nomadic villages.”

Concerned that the mining activities have not been approved by the Central Government, as well as their impact in causing environmental problems, including pollution, over 1,000 Tibetans gathered to protest against the mining activities in each of the three sacred Buddhist sites. The local Tibetans protest that the mining workers increase environmental destruction in the county, that they have not followed China’s environmental protection laws and are carried out by the workers in coordination with corrupt state and local officials. Protesters raised their hands and shouted slogans such as “stop the destruction of the environment”.

The massive crackdown followed a tense confrontation between local Tibetan protestors and Chinese mine workers at three sacred Buddhist sites having diamond reserves . Tibetan residents of the area have long regarded the mountains targeted for mining as the homes of protective deities. On Friday, Chinese security forces stormed two of the three mining sites in the mountainous area where demonstrators had been in a standoff with Chinese mine workers since early in the week. Over 500 armed police stormed holy sites in Atod Yultso and Zachen Yultso and fired teargas to disperse the protestors. The protestors were tortured, severely beaten with gun butts, and threatened with being shot if they don’t end their protests.

China’s large-scale exploitation of mineral resources in Tibet has led to sustained socio-economic and environmental problems. Massive influx of Chinese migrant workers into Tibetan areas deprives Tibetans of employment opportunities,” said the Central Tibetan Administration (CTA) based in Dharamsala-India after the incident.

The CTA said it has “repeatedly called on China to ensure active participation of Tibetan people in all decision-making process and that social, environmental and cultural impacts assessment are carried out.”

In 2012, the Chinese government had issued its plans to extinguish what remains of the nomadic way of life in Occupied Tibet. Citing overgrazing as the concern and rationale for this, the policy, however, intensely makes way for mining and ‘development’. This crackdown should be viewed in light of this policy. In distinguishing the Tibetan traditional nomadic and semi-nomadic way of life, the Chinese are hoping to make way for more resource exploitation.

Declaring its intent on ending the nomadic Tibetan way of life before the end of the 20th century back in 1998, the Chinese government has intensified efforts. By 2010,  1.4 million people had been forced into ghetto-style housing blocks. Resettled nomads are denied the right to freely determine their own future. Settlement offers almost no economic opportunities, causing social and economic problems, including unemployment, alcoholism, and suicide.

This is a similar situation to the ‘villagization’ programs of the Ethiopian Derg regime as well as the current government’s efforts.

Clearing the people who have different visions for the use and value of the land out-of-the-way so the dominant society can exploit all they can is of the logic of conquest and colonialism.

In Tibet, the situation remains tense. There is growing anger over the harsh crackdown. It seems that the standoffs between mining companies and the Tibetan peoples will continue to increase until China understands that nomads are not a problem to be solved, but a solution in waiting to the ecological issues China has created.