Threatening the Land and People of Chiapas 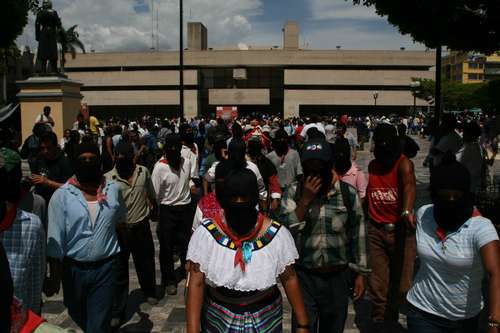 The Mexican government has announced plans to bring ‘progress’ and ‘development’ to Chiapas, under the renewed “Plan Puebla Panama” scheme, now called the “Mesoamerica Initiative.”

“A renewed push to exploit and destroy the land and people of Chiapas,” says rootforce, the plan involves the ‘four horsemen of Chiapas’: mining, infrastructure, bio-fuel, and oil.

For some time now Chiapas has been faced with major challenges surrounding minerals exploitation, particularly from Canadian mining companies, who, as we should all know well by now, “are notorious throughout Latin America [and the rest of the world] for their ruthless eviction of traditional communities and for their devastation and pollution of lands and rivers,” says Jessica Davies.

This is precisely what awaits Chiapas where “there are apparently 55 new mining applications pending… for the exploration and extraction until 2056 of gold, silver, copper, barite, lead, titanium, iron, zinc, antimony, molybdenum, and other minerals needed for the oil industry,” Davies adds.

Regarding infrastructure, the government wants to help the extractive industry and expand tourism by constructing roads, bridges, and various other developments.

For instance, in the Northern part of Chiapas, a so-called “eco-archaeological tourism” theme park is currently in the works.

Located at the pre-colonial Mayan city of Palenque, the ‘theme park’ will consist of “[a highway and 3 bridges] as well as hotels, restaurants, related businesses and an expansion of the Palenque Airport,” according to the Chiapas Support Comittee. “The highway and other construction will cut through and divide the land of the living Maya while facilitating the tourist exploitation of [their ancestors].”

Plans for the final two ‘horseman’ – oil and bio-fuel – were announced by the Mexican Energy Secretary Georgina Kessel, on November 21.

Kessel said that in 2009, Pemex, Mexico’s state-owned oil company, would be allowed to start prospecting and drilling for oil in the Lacandon rain forest, among other areas.

Also known as the “Black Vomit Nut” Jatropha is a very controversial plant because of its highly toxic properties. Consuming as few as three of its seeds can be fatal to humans.

Overall, this four-part scheme, which has been pledged to “save the economy” and bring “progress and development for the benefit everyone,” implies “very serious threats to the rich biodiversity of the state of Chiapas and to the rights and the lands of the indigenous peoples of the region,” states the NGO ‘Maderas del Pueblo’ in a November 23 communique.

With it, “the federal and state governments have shown that they have embarked on a ‘schizophrenic demagogy’ in which, at the same time as they announce policies, programmes and ‘green’ resources to tackle climate change, there is an obvious contradiction as they are clearly demonstrating themselves in favour of a return to a savage capitalism, of a short-term and extractive character, together with the interests of grand capital, of the biotechnology and pharmaceutical sectors, of those producing bottled water and all those keen to convert wood and forest cover into ‘sinks’” for the multinational carbon market; of all those hiding behind a disguise of green philanthropy and supported by cross-governmental, national and international organisations, and calling themselves ‘conservationists’, and who have been encouraging and applauding the official policy of pillaging and plundering the biodiverse indigenous territories and turning them into ‘Protected Natural Areas’ ‘for the benefit of humanity’,” Maderas del Pueblo continues.

“The basic question [now] is: Will the indigenous people and campesino communities, with their lands, natural resources and rights all threatened, permit this proposed plunder to take place?”