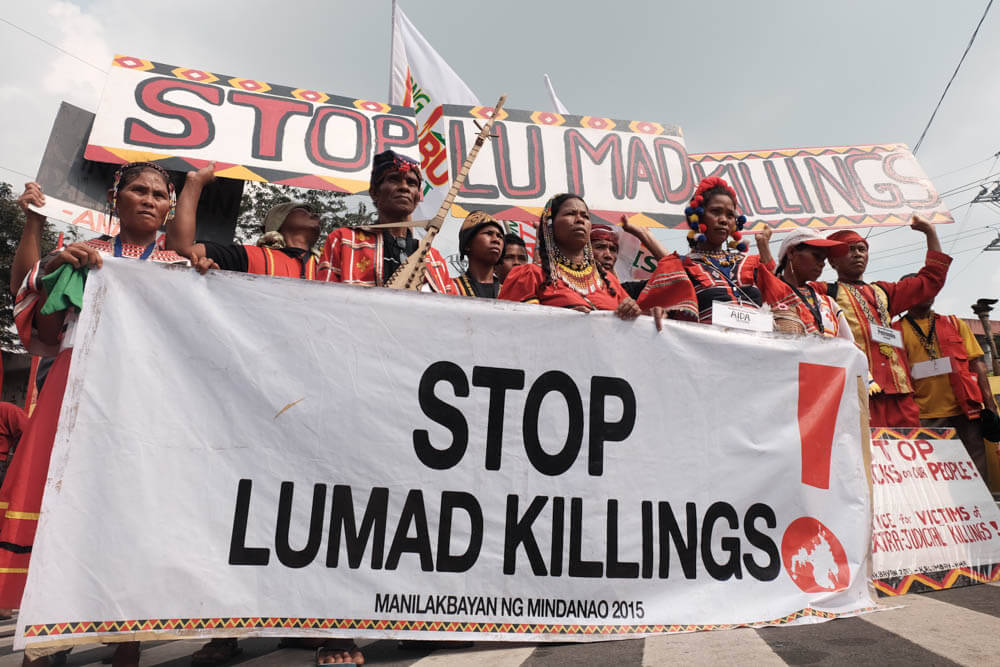 Last week, a 3,000 person-strong people’s caravan, or Lakbayan, formed on the island of Mindanao to protest the criminalization and murder of Indigenous Peoples and environmental defenders in the Philippines.

Though the numbers reported vary, the organizers of the caravan say 144 indigenous people, environmental defenders and human rights activists have been the victims of extrajudicial killings during the reign of incumbent President Benigno Aquino.

In a statement released before the Lakbayan, the groups connected these killings and rights abuses to the increasing presence of the extractive industries in Mindanao and the Philippines.

“These human rights abuses glaringly persist in the ancestral domains where the big and foreign mining companies and agri-plantations operate,” they said.

These killings form part of a wider pattern. According to research by UK-based think tank Global Witness, two environmental defenders are killed every week as they work to protect their lands from being appropriated and exploited by mining companies and other industrial interests.

In recent years, the Philippines has become a hot spot for these killings. But, as is the case around the world, very few of those responsible for the murders of environmental defenders ever see a court of law. Around the world between 2002-2013, perpetrators of such killings were brought to justice in less than one percent of cases.

On Sept. 1, 2015 educator Emerito Samarca and two Lumad leaders, Dionel Campos and Aurelio Sinzo, who opposed large scale mining, were brutally murdered in Lianga, Mindanao. According to local reports, the men were killed in the heart of the community by members of the Maghat/Bagani paramilitary group, attached to the 36th Infantry Battalion of the Philippine Army.

Speaking at COP21 in Paris, Clemente Bautista, National Coordinator for Kalikasan PNE, described how the Armed Forces of the Philippines and affiliated paramilitaries are implicated in the terrorization of Indigenous and peasant peoples.

“The government is using militarization to protect corporate mining in the Philippines. They use the state military forces including paramilitaries to secure mining projects, quell the people’s resistance, and sow fear among the people, particularly those in mining-affected communities. Mining corporations, military and paramilitary groups employ violence such as harassment, illegal arrest and assassination, targeting anti-mining leaders”, he said.

The killings of Samarca, Campos and Sinzo are the latest in a spate of murders that has seen 56 Lumad leaders assassinated for protecting their lands and communities.

The ‘Lianga Massacre’, as it has become known, sparked international outrage and a day of solidarity and action that called on the Philippine Government to Stop Lumad killings. But the more diffuse consequences of the terror these kinds of killings are designed to produce have been underreported outside of the Philippines.

The relentless persecution of the Lumad People is creating a climate of terror in Mindanao that is profoundly impacting the freedom of the Lumads to live their lives freely.

In their statement before the three-day Lakbayan, organizing group Soscskargends Agenda revealed how the rising tide of violence in Mindanao has contributed to the internal displacement of up to 40,000 Lumads. The Lianga Massacre alone forced over 3,000 local Lumads to flee their isolated villages in Surigao del Sur to nearby towns, fearing for their lives.

The constant threat of violence in Mindanao and the panic migrations that result are having a particularly negative impact on Indigenous children. According to Soscskargends Agenda, at present 9 out of 10 Lumad children have no access to formal education and 87 Lumad schools are suffering from “various forms of military violence”.

“The 36th IB Philippine Army-Magahat/Bagani rampage at the ALCADEV School shows that the Aquino government has dropped all pretenses of adhering to the United Nations Convention on the Rights of the Child and other international human rights instruments”, say the International Coalition for Human Rights in the Philippines.

The Lakbayan gave the groups involved an opportunity to elevate these underrepresented issues and create a platform for several urgent demands.

The groups are calling upon the Philippine government, first and foremost, to stop the killing of Lumad people, protect indigenous and peasant schools in Mindanao, and pull the plug on the large scale multinational mining projects that they say are helping fuel poverty and violence in the Philippines.

Mindanao has become known as the ‘mining capital’ of the Philippines. The island is peppered with 500,000 hectares of mining concessions, an area almost eight times larger than Metro Manila, the National Capital Region of the Philippines. These concessions have overwhelmingly been granted to multinational corporations, many of which are registered in Global North nations such as Canada.

Other islands in the Philippines, estimated to be the sixth richest nation in the world in terms of mineral and metals, have experienced a similar expansion of large scale mining since the Philippine Mining Act of 1995 (Republic Act 7942). The Act liberalized the country’s mining sector, promising economic growth and development through the exploitation of the country’s natural resources with the help of multinational corporations.

However, many Filipino civil society and indigenous groups argue that the liberalization of the mining sector has led to rising poverty, not prosperity, for Filipinos.

In a recent report*, Philippine people’s network Kalikasan PNE write that, based on data from the Philippine Bureau of Internal Revenue, between 1997 to 2013 less than 10% of mining revenues generated in the Philippines stayed in the country’s economy. According to their research, mining contributes only 0.7percent to Philippine GDP and provides just 0.7% of employment.

The significance of these figures is emphasized when the costs mining corporations inflict on ecosystems and local communities are considered. The presence of multinational mining corporations in the Philippines has unleashed a tidal wave of environmental destruction on local indigenous and rural communities, costing thousands of livelihoods, devastating ecosystems and sustainable local economies.

The Marcopper disaster at a mine the owned by Canadian multinational Placer Dome on the island of Marinduque provides a good example.

On March 24, 1996 a sealed mine tunnel connected to a pit containing 23 million metric tons of mine waste fractured, leaking between 2-3 million tons of the waste into the Boac River. Residents of twenty local villages were forced to leave their homes, some of which were totally inundated by the flash flood of mine waste.

Agricultural fields were also flooded and the rapid destruction of all aquatic life in the Boac, a key source of livelihoods for local fishing communities, led the Philippine government to declare the river dead. Local peoples had already suffered decades of chronic environmental pollution, loss of livelihoods and ill health as the result of mining.

Dozens of other mining disasters have occurred in the period since the Mining Act of 1995 was passed. “Simply put”, write the authors of Kalikasan’s report, “we have experienced two decades of mining plunder.”

The two decades since Mining Act of 1995 was signed into existence have also been characterized by escalating resistance efforts from Indigenous Peoples, peasants and their supporters at the local, national and international levels.

Indigenous Peoples in particular have taken a stand to defend their territories, even taking up arms to protect their lands. In some cases this sustained resistance has been successful in preventing mining projects going ahead.

In June 2015, the Indigenous B’laan people and Philippine environmental groups celebrated mining giant Glencore Xstrata’s decision to pull out of the highly contested Tampakan copper-gold mining project. The company had been attempting to get mining under way since taking ownership of the project in 2001, but met powerful resistance from the B’laan.

The Philippine government’s response to such strong, sustained and well organized resistance has been to increasingly militarize areas where multinationals are operating, as seen in the case of Samarca, Campos and Sinzo.

The organizers of the recent Lakbayan say the current Aquino government’s ‘vicious internal security doctrine’, Oplan Bayanihan, is being used as a cover to to attack the schools, communities and leaders of those who actively resist mining.

The stated aim of Oplan Bayanihan, a government counter insurgency program, is to squash the New People’s Army (NPA), a communist guerrilla group that has been warring with the Philippine government for over two decades. However, the powers contained in the plan are also used to criminalize anti-mining activists who threaten the interests of multinationals in regions like Mindanao.

These activists are frequently accused, by the government, military and paramilitaries, of being connected with the NPA. Branded as anti-government rebels their intimidation, incarceration and/or murder is effectively excused.

But even this systematic state repression is not stopping people standing up for their rights, says Bautista.

“We say more oppression breeds stronger resistance. Surely the government and corporations will continue to trample the rights of the indigenous people and other sectors. This will make Indigenous Peoples and ordinary people more united and their collective struggle stronger.”

Holding cultural events, forums and symbolic actions along the way, the recent Lakbayan paid testimony to this theory, as people voted with their feet and raised their voices for justice.

*The report, Kalibutan: Stories and lessons from the Filipino people’s struggle for the environment, is not yet available online. Visit Kalikasan PNE’s website to make enquiries and find out more.