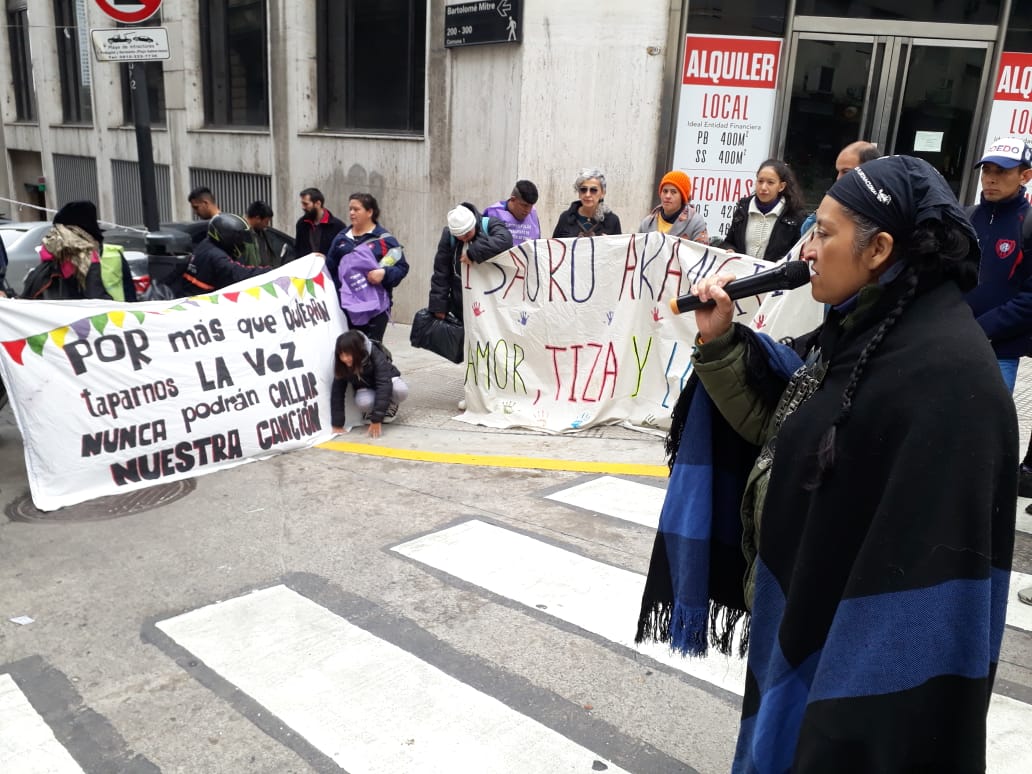 “They sowed Terricide; they harvested rebellion”

The Native Flower Rebellion comes to a close, but, the Indigenous women say, the fight's not over
Mapuche weychafe, activist and author Moira Millan gives a talk in the street in front of the Interior Ministry. Photo: Movement of Indigenous Women for Good Living
Support our journalism. Become a Patron!

As the Extinction Rebellion shut down the system in the North, Indigenous women in Argentina staged an uprising of their own. The Native Flower Rebellion was an occupation of “self-convoked” Mapuche, Guaraní, Qom and other Indigenous women who traveled from all corners of the republic to demand an accounting from their government.

On October 9, the group of 23 women occupied the Ministry of the Interior in Buenos Aires. According to them, The agency is the focal point of much of the racist, violent and environmentally devastating government policy in their territories.

The women said that they want to see an end to the violence that Indigenous Peoples face; especially the horrific abuses and attacks that Indigenous women are forced to contend with across the country.

During the first days of the occupation, the women pointed out some startling statistics to emphasize their heartfelt demand:

“In Argentina today, eight out of ten Indigenous women suffer rape, abuse and physical violence. Seven out of ten suffer from police and state security forces. Of every eight women, seven cannot access justice. Five out of eight women who are raped or killed are elders, in most cases spiritual authorities.”

They told the world that they would not go away until they were sure they were heard — and that action is being taken to address their demands. 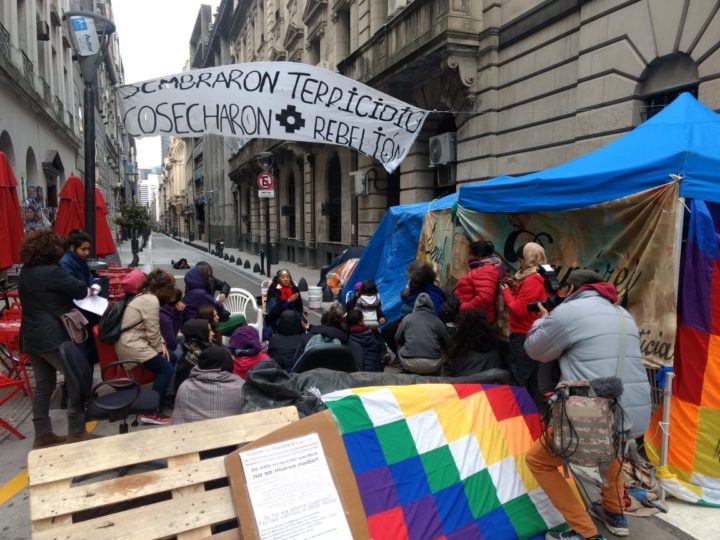 “Since we’re not on the agenda of politicians we want to be on the agenda of your hearts. Know that everything they do to us, they are doing to the mountains, the rivers, the forests, the hills.”

Their words did not fall on deaf ears. Early on, the women sat down with Dr. María Fernández Rodríguez, Argentina’s Secretary of Justice. “The meeting was positive,” the women later said. “We were able to be heard, and we raised three specific cases: the case of the disappearance of Marcelino Olaire (disappeared since 8-11-2016); the case of Ismael Ramírez, 13, killed by the police of Saenz Peña, Chaco; and… the situation of our sister Maria Mendoza and the harassment she and her community suffer. Her son is unjustly imprisoned after being brutally beaten by the Formosa police.”

“We also denounced what is called ‘chineo,’ naturalizing the rape of our girls,” they said.

The Secretary of Justice pledged to follow up on everything that fell within the Ministry’s jurisdiction. 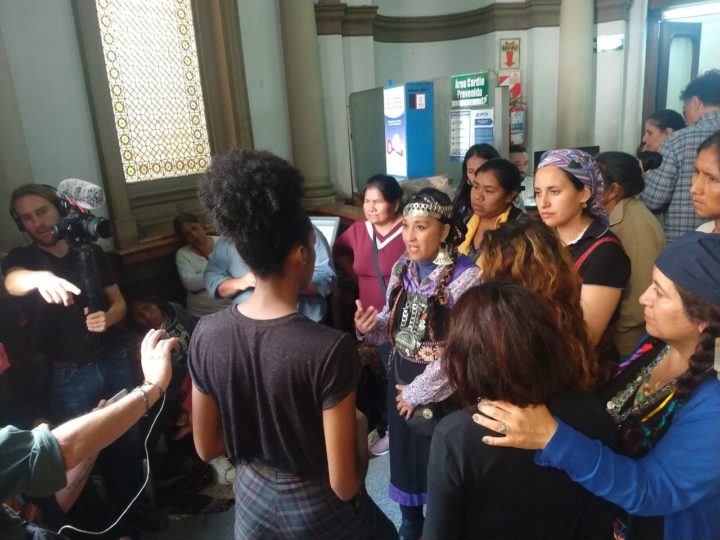 “The social emergent today is the Earth, and we are spokeswomen for her pain.”

Two days later, the women met with Nahuel Muñoz, the advisor to Argentina’s Environment Minister. During this meeting, Muñoz assured the women that the Ministry would finally cover some wells near the city of San Ignacio, Misiones, that were endangering kids. Muñoz also pledged to provide safe drinking water to that community and assist other nearby communities with their water needs.

After ten days, the group of women were satisfied that they made significant steps forward.

“Today will be the last night of our peaceful occupation,” the women wrote in their third and final press statement. “Today there were some meetings that yielded solid results, especially on very specific and urgent issues. We believe that our demands were recorded, and they are in the process of working to have prompt solutions.”

In this larger context, the women said that this is only the “first part of the fight we have walked”. 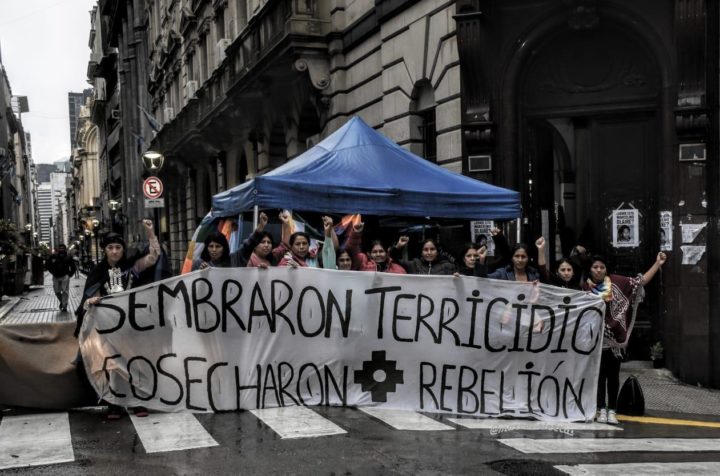 “They sowed Terricide; they harvested rebellion.”

“We have felt very accompanied by many people individually, especially young people who are questioning the current development model and the system, and came to join their efforts, their hearts and their spirits with us…. Above all, we are grateful to be walking with brave sisters who after centuries of oppression and silencing begin to empower their voices and begin to demand their rights. We conclude the tenth day feeling victorious, at least in this first part of the fight we have walked.”

They went in to announce their future plans:

“We will launch a campaign for a #Plurinational event on May 1, 2020, and we will call an encampment against climate change in February 2020 at the Lof Mapuche Pillan Mahuiza community. We will not cease in our fight against terricide.”

As the occupation began, the women talked about what’s at stake:

Through us, speak thousands of years of culture that have built a way of inhabiting the world in relation to reciprocity and amorousness with the Earth. Through us speak our ancestors, who were guardians of that wisdom and who with much pain and sacrifice were able to leave us their knowledge. Through us the Earth speaks, that land with which we are linked in our spirituality, in our way of understanding life. Honoring the ground we step on, honoring the fruit of the land that feeds us. Honoring the different ways of life, we come with determination, with courage and dignity to say: Enough.

We accuse the governments and companies that are killing our territories of terricide. We call terricide the murder not only of the tangible ecosystems and the peoples that inhabit it, but also the murder of all the forces that regulate life on Earth, what we call a perceptible ecosystem. Those spirits are responsible for life to continue on the face of the Earth and they are being destroyed along with their habitat. There will be no possibility to repair and restore these ecosystems, no matter how much you can reforest or create green spaces, the force that inhabited those areas will be gone forever. We are in time to avoid that.

We are givers and guardians of life, and just like when a mother tells her son: enough, stop, we come to say enough to this capitalist, racist and patriarchal system that is putting the life of the planet at risk.