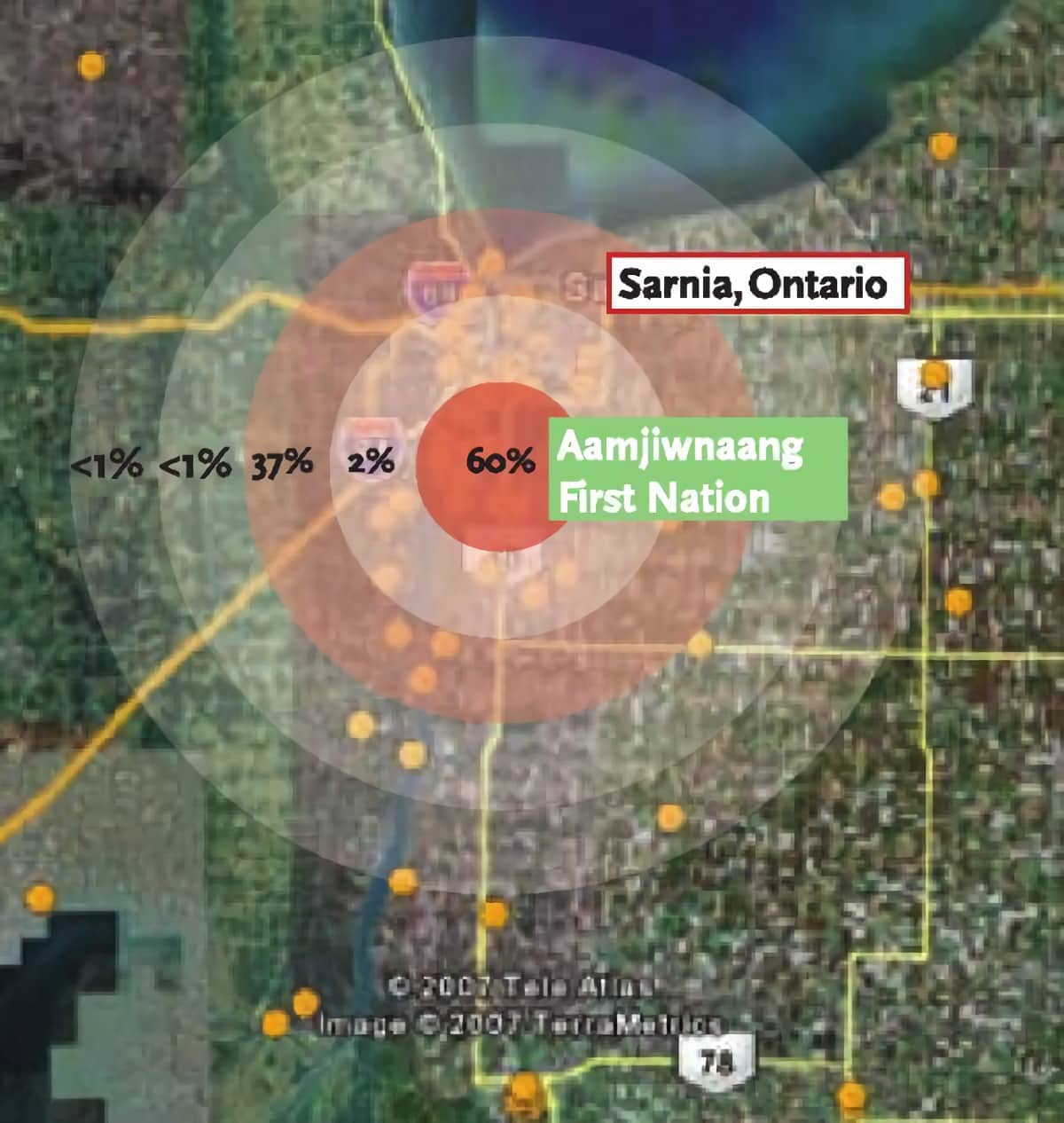 A cross-border, investigative report was published last month by Eco Justice Canada (formally Sierra Legal) which details the amount of toxins released – and the impact it’s all having on the people living in Canada’s Chemical Valley–the region of Sarnia, Ontario.

Populated by at least 71,000 Canadians and three 3 Indigenous Nations, there is a total of 62 large industrial facilities currently in operation. On top of that, in the immediate vicinity on the other side of the US/CAN border, there are 16 more.

According to the report, in 2005, Canada’s side released a combined mass of 131,000 tonnes of pollution into the air; with the US contributing an additional 1,900 tonnes in the same year.

Obviously, that amount of pollution (dioxins, Mercury, Toluene, Benzene, etc.) is going to have an effect on any number of people; toxins don’t discriminate.

We’re starting to see the effect on the Aamjiwnaang Nation, who lives in the toxic shadow of Chemical Valley. The Aamjiwnaang reserve is currently home to about 850 people, with some 1100 members living off reserve in surrounding communities.

In 2006, the Aamjiwnaang Environment Committee interviewed band members about pollution in the area. Members of the reserve identified releases of chemicals and incidents such as spills as their primary concerns. In addition, these chemicals and related incidents have significantly impacted their cultural life, their ability to hunt, fish, gather medicine and practice ceremony. Children can’t even swim in nearby Talfourd Creek anymore. About four years ago, they started getting sores on their legs from entering the water.

When asked about their health, an unsettling pattern emerged.

On top of that, the Aamjiwnaang have noticed in recent years that an irregular number of girls are being born. A recent article by the Native Times notes that around the world, an average of 106 boys are born for every 100 girls. “For years, scientists have been reporting declines in male births worldwide,” the article states. “But the most startling is the sharp drop of boys among the Aanishinaabek of Aamjiwnaang.” According to another report published in August 2005 by the environmental health journal Environmental Health Perspectives, the birth ratio is shifting at “a greater rate of change than has been reported previously anywhere.” Currently, about 2 girls are born for every one boy.

Currently, nothing is being done by industry or the government to change this situation for the better, or at least to prevent things from getting worse.

The Report by Eco Justice notes that some companies are reducing their emissions, but it’s nowhere near enough. The report also recommends the government must ensure industry is complying with environmental regulations. The thing is, industry says it is acting within regulation…

By all means they’re telling the truth; but even it they’re not, it’s clear that if they’re allowed to continue business as usual, things are going to get worse–not just for the Aamjiwnaang community, who, in one or two generations may be faced with cultural and physical extinction–but also for Canadians living in the area.

Fortunately, there are some efforts on part of NGO’s and the Aamjiwnaang themselves, but beyond that, there is only endless talk about the need for more reports, more evidence, more proof.

Such proof has existed since as far back as 1987… what more does the government really need?