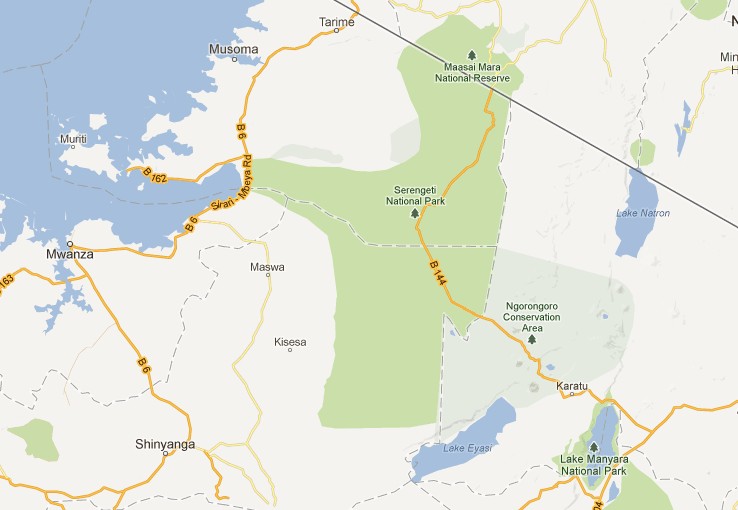 The Tanzanian Government Insists on Grabbing Maasai Land in Loliondo

The Tanzanian government, through the Minister for Natural Resources and Tourism, Khamis Kagasheki, is moving forward with a plan of taking 1,500 square kilometres which are essential dry season grazing land for the Maasai of Loliondo in Ngorongoro District.

The main economic activity and source of livelihood of the people of Loliondo is pastoralism – moving livestock between seasonal grazing areas – that compared to other land uses is relatively compatible with wildlife – and this is a major reason that their land is so sought after by the tourism industry and the Government.

In 1959 all people were evicted from the vast Serengeti by the British Government for the purpose of establishing the National Park. Among them the Maasai that were moved to Ngorongoro Conservation Area and also to Loliondo. Contrary to promises the Tanzanian government has continued with a greedy eye on lands that it wants for the exclusive use of hunting and photographic tourism. Currently this greed is focused on a corridor of land in Loliondo Division of Ngorongoro District.

In 1992 Otterlo Business Corporation Ltd – that’s not a “corporation” but an organisation managing hunting trips for royalty from the United Arab Emirates – was given the Loliondo Game Controlled Area – the whole of Loliondo Division – as a hunting block and since then their lease keeps being renewed by the Government – not the Maasai landowners. The core hunting area of OBC is the corridor of land bordering the National Park, but in theory they could hunt rats around the District Commissioners office. OBC do not have any land, but only what’s basically a hunting license. Nevertheless, OBC seem to think that they operate in some half protected area where they control the land while having to put up with customary landowners that they shower in charitable projects. When conflict flare up they get the support of the government. For the 2009 hunting season OBC together with Tanzanian authorities evicted people from the corridor that’s almost half the size of the Emirate of Dubai. In this operation at least 150 bomas were burnt to the ground, including grain stores and even some young livestock that were burnt to death. Some 60,000 heads of cattle were pushed into an extreme drought area and calves were left behind in the stampede. This significantly worsened the alarming rates of cattle deaths of the severe drought at the time. Many cases of beatings, humiliations and sexual assault have been reported. Several children were lost in the chaos and terror and one of them – 7-year-old Nashipai Gume from Arash – has not been found. The evicted people eventually moved back and many leaders “reconciled” with OBC.

In early 2011 the government again made a move to grab this corridor of land presenting a frightening land use plan that would turn the corridor into a “Game Controlled Area” as per the Wildlife Conservation Act No 5 of 2009. A Game Controlled Area was in colonial times an area where hunting, as opposed to an “Open Area”, was not permitted. Though gradually hunting blocks were established in Game Controlled Areas and since other land uses like pastoralism and agriculture were not restricted, and all Game Controlled Areas fell on village land, the name stayed on without any real meaning. Using this same name for a new area that’s not allowed to overlap with village land and where pastoralism and agriculture would not be allowed (hunting would of course be permitted) was almost certainly done with the intention of creating confusion and the Government is having some success with this. The land use plan was strongly rejected by local leaders because of its non-participatory nature and thinly disguised land grabbing purpose. Another attempt by the Government was when the village of Ololosokwan received a letter requesting the handing in of its land certificate, but then for a while the threat seemed to die down.

In November 2012 a crisis broke out when people in Ololosokwan found that Tanzania National Parks were planning to erect Serengeti NP border beacons on the land of the village. There were major demonstrations and the beacons were dropped back inside the National Park.

On 27th January 2013 the Minister for Natural Resources and Tourism held “stakeholders’” meetings in Loliondo. He did not seem to grasp the issues and his only concrete idea was for “investors” to work together forming an association.

Currently there are many players in the tourism industry in Loliondo and none of them can be trusted, though occasionally some of them play by the rules entering proper contracts with the villages. The most destructive force among them is the Boston-based Thomson Safaris claiming 12,617 acres of grazing land as their own “Enashiva Nature Refuge” and harassing the pastoralists as “trespassers” while involved in an aggressive propaganda campaign for their “community-based project”.

The last weekend of February the Minister returned to Loliondo with the message that the Game Controlled Area as per Wildlife Conservation Act of 2009 was the best “solution” for Loliondo.

To media the Minister was saying that the Maasai are “landless” and being “given” the land that they already have – except the corridor – under the condition that they form a Wildlife Management Area that’s presented as a way for communities to “benefit from wildlife” while in reality it’s a recipe to increase central government control. The move was described as “addressing historical injustices”. A historical injustice is actually what the Government seems determined to commit.

Then on 21st March after a brief meeting in Arusha with top district leaders the Minister for Natural Resources and Tourism showed up again in Loliondo. Local leaders had got information that the minister was sent by the President to announce that the 1,500 square kilometre corridor would be taken by the Government as a Game Controlled Area to protect wildlife and water catchments. The local leaders refused to enter the District Council conference hall together with the Minister and demanded that the Minister should answer questions from people outside instead. This made the Minister leave in a fury.

The leaders and the citizen who were around waiting for the Minister talked to the media to express their views on the matter. Ololosokwan ward councillor Yannick Ndoinyo told media, “We are not ready to surrender even one meter of our land to investors for whatever reason” and several other leaders had the same message.

The following day all affected villages held meetings and a big meeting to discuss the way forward is planned for 25th March.

The people of Loliondo need help, as well as moral and material support, from anyone around the world with an idea about how to fight back or with a platform to speak from, and most needed of all is the support of those that have the fate of the landgrabbing government in their hand – the people of Tanzania.

From the meeting on 25th March:

“Resolutions of the meeting. 1. Unity if Maa community 2. The issue of land grabbed by the government without the consent of the people. 3. If the government make the announcement people will seek a court injunction to stop it. 4. Contributions for this intervention. 5. Political leaders will resign from their positions if the government cut off their area. 6. All attendants should write their name and where they come from. 7. Relationships. (from today all contracts with OBC are being ended).” (My translation)

The Minister for Natural Resources and Tourism has now announced the land grab presenting it in the usual misleading way as “reducing the Game Controlled Area”.

From 2011, blog post with the history of the corridor and OBC. http://www.termitemoundview.blogspot.se/2011/07/corridor.html

From 2011, Voices from Loliondo about the Land Use Plan http://www.youtube.com/watch?v=7knZOEVxO0k

News piece on ITV television about the protest against the beacons of TANAPA https://www.youtube.com/watch?v=a66HfC1qeBE

Blog post about the beacons at Klein’s Gate http://www.termitemoundview.blogspot.se/2012/12/the-beacons-from-hell.html

A call for help on the official blog of Ololosokwan http://ololosokwan.wordpress.com/2013/03/16/streets-of-ololosokwan-are-burning/

This article was originally posted at Susanna Nordlund’s blog, View from the Termite Mound