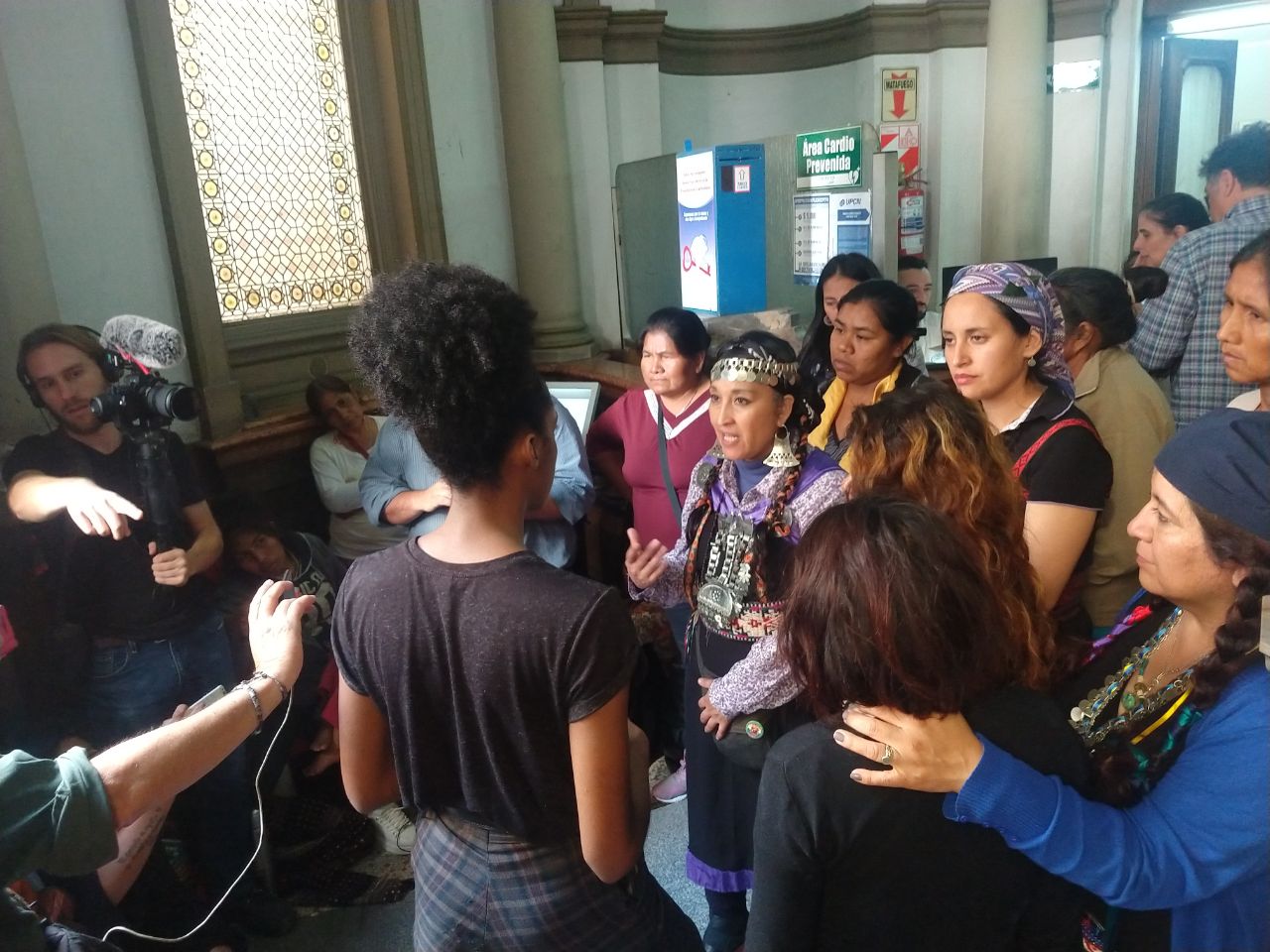 The rebellion of native flowers: Indigenous women in Argentina say ‘Enough’ to terricide.

"Since we’re not on the agenda of politicians we want to be on the agenda of your hearts. Know that everything they do to us, they are doing to the mountains, the rivers, the forests, the hills."
Support our journalism. Become a Patron!

We indigenous women from different territories in conflict, belonging to various indigenous nations of Argentina, come to bring the thought, the word, the proposal, which has emerged from the heart of the Earth that beats beneath our feet. This heart is constituted by the whole spiritual world that sustains life on Earth, which we name in different ways, according to the voices of our peoples, reaffirming the territorial plurinationality that we have always formed. We call ourselves to come because government officials have an obligation to listen to us.

We are givers and guardians of life, and just like when a mother tells her son: enough, stop, we come to say enough to this capitalist, racist and patriarchal system that is putting the life of the planet at risk.

In Argentina today, eight out of ten indigenous women suffer rape, abuse and physical violence. Seven out of ten suffer from police and state security forces. Of every eight women, seven cannot access justice. Five out of eight women who are raped or killed are elders, in most cases spiritual authorities.

Through us, speak thousands of years of culture that have built a way of inhabiting the world in relation to reciprocity and amorousness with the Earth. Through us speak our ancestors, who were guardians of that wisdom and who with much pain and sacrifice were able to leave us their knowledge. Through us the Earth speaks, that land with which we are linked in our spirituality, in our way of understanding life. Honoring the ground we step on, honoring the fruit of the land that feeds us. Honoring the different ways of life, we come with determination, with courage and dignity to say: Enough.

We accuse the governments and companies that are killing our territories of terricide. We call terricide the murder not only of the tangible ecosystems and the peoples that inhabit it, but also the murder of all the forces that regulate life on Earth, what we call a perceptible ecosystem. Those spirits are responsible for life to continue on the face of the Earth and they are being destroyed along with their habitat. There will be no possibility to repair and restore these ecosystems, no matter how much you can reforest or create green spaces, the force that inhabited those areas will be gone forever. We are in time to avoid that.

The social emergent today is the Earth, and we are spokesmen for her pain.

Terricide also destroys entire villages that are the guardians of a way of understanding the art of inhabiting, which is necessary to be able to place the matrix of a new civilization. When they are eliminated, when indigenous peoples are killed, the opportunity to build a new model of society is also being killed. Each of us indigenous peoples not only have theories, we have the practices of reciprocal societies with nature that sustain life as the main value.

At this moment in the world, voices are crying out against climate change, demanding that governments put on the brakes, voices that are coming from Europe and can count on all the reflectors and amplifiers in the media. However, racist global policy makes the voices of indigenous peoples inaudible and invisible, and our deaths are made to be socially meaningless.
We indigenous women are the bodies that suffer most from these atrocities.
To our men we say: Wake up! Our anti-patriarchal struggle is an anticolonial struggle. Check your behaviors that are permeated by this colonizing, slave, western mentality that has put us in a place of submission, humiliation and abuse. In the past we were always complementary duality united from reciprocity and amorousness between beings. We want to recover this wisdom that inhabits us. In many of our communities there is no water, to wash clothes we have to walk 3 or 4 kilometers; cooking food for our family has become an almost impossible mission, dammed rivers, contaminated, devastated forests, murdered forests.

We denounce State terrorism since we suffer arbitrary detentions and raids every day; disappearances and torture; evictions to our communities that are a violation of our rights and laws that protect us. Prior informed consultation is not respected. We also denounce the militarization of the territories.

It is up to us historically to sustain and save the lives of our families, which is why the cruelty against indigenous women is greater.

In the 2nd Parliament of indigenous women for Good Living, a survey was carried out that explains the femicide we are exposed to. In Argentina today, eight out of ten indigenous women suffer rape, abuse and physical violence. Seven out of ten suffer from police and state security forces. Of every eight women, seven cannot access justice. Five out of eight women who are raped or killed are elders, in most cases spiritual authorities.

We have come a long way to get to Buenos Aires, we come with proposals that we believe will contribute to helping the fight against climate change, and to restore equity and reciprocity among peoples.

We have the responsibility of being carriers of this message, we cannot return to our territories without having spoken and without being certain that not only the top officials who administer this country have listened to us, but we are also audible to all the peoples of the world and that we have consensus on the right to a good life.

Safeguarding the life of the territories, curbing climate change, is our obligation. Part of the proposals we bring are essential for this to be introduced into the political agenda no matter what happens in the next elections. Let’s not be obsequious with the politicians in office.

For us there are no individual leaders, but peoples leading their future. Life is not negotiable.

We have allowed the imposition of a system of death, which has denatured humanity; we want to remind you that we bring nothing to the world when we arrive and we take nothing when we leave, we only leave our footprints in the fleeting path of our lives.

We ask you to be alert! Be now you guardians of our voices in this city.

We decree the rebellion of the Native flowers.

They who have sowed terricide will reap Rebellion!!! 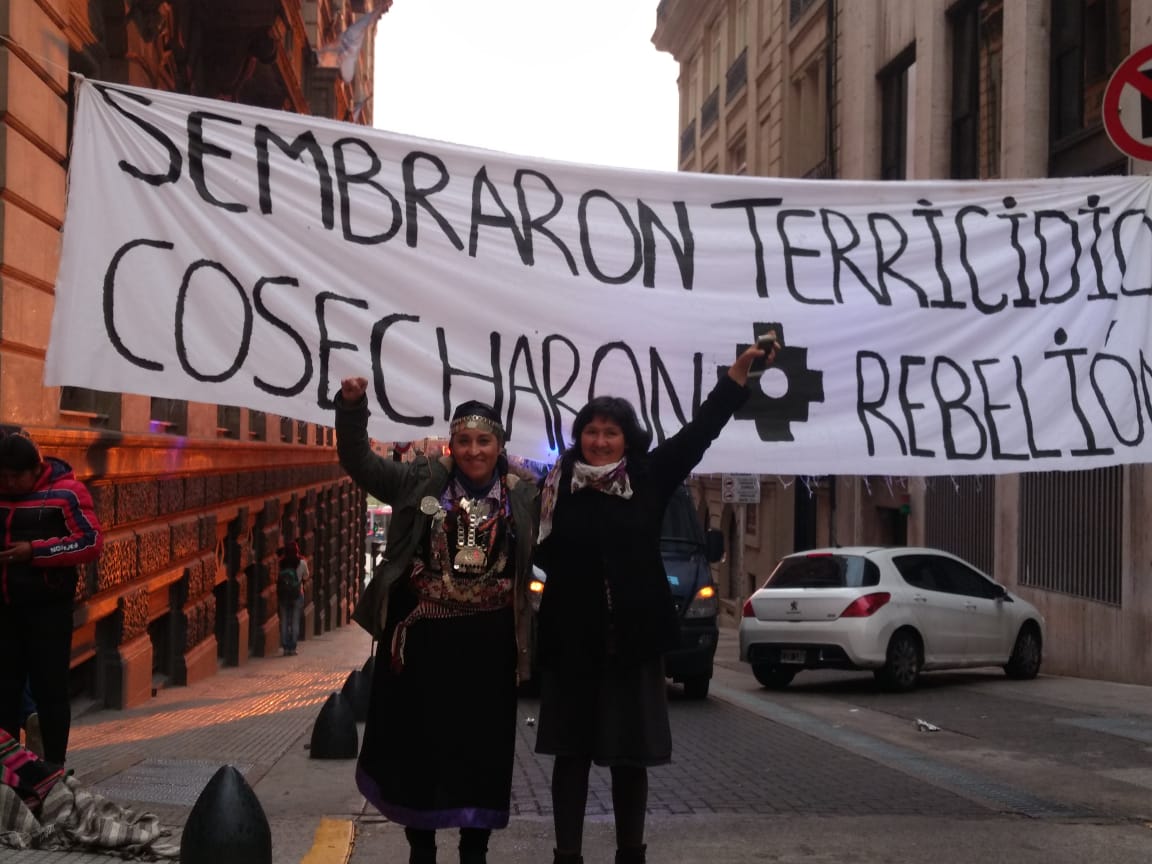