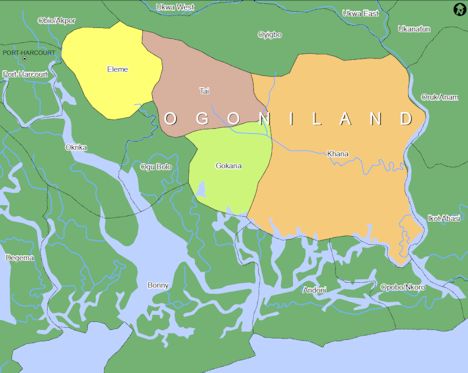 The Ogoni: Indigenous Autonomy in an African Context

The Ogoni are a distinctive people, numbering around 850,000, in the Niger Delta region of the modern-day nation-state of the Federal Republic of Nigeria. They have a distinct culture, language, and history, and have traditional religious and political systems that differ even from their closest neighbors. Prior to British colonialism they had never been subjugated or conquered by another people. After “decolonization” into the state of Nigeria, the Ogoni continued to be treated as a conquered and subjugated people.

In 1958, just before Nigeria was “decolonized” by the British and given over to “native” rule, the Willink Commission was charged with the task of studying the minority population and offering methods to allay any fears about being absorbed into the larger state of Nigeria. Although much fear was found, especially with the Ogoni, the final report said that more autonomy would not resolve those fears. Thus, the peoples of Ogoniland were forced to become a part of Nigeria.

Also in 1958, oil production began in Ogoniland through a consortium between Royal Dutch Shell and the Nigerian government. Active and popular resistance to the oil extraction was often and brutally suppressed. This process of oil production has forced the Ogoni into smaller areas of land as vast amounts of Ogoniland have been lost to oil prospecting and development, as well as environmental destruction. With a population density higher than the national average, issues of hunger, disease, and a lack of social amenities such as piped water, electricity, and good roads are exacerbated. This, in addition to the environmental destruction caused from oil spills and gas flaring has harmed their way of life with vast areas of arable land being contaminated and waterways no longer capable of holding fish. As Ken Saro-Wiwa declared in his book, Genocide in Nigeria, the Ogoni are experiencing what can be termed as the slow process of environmental genocide.

In 1990 the Movement for the Survival of the Ogoni People (MOSOP) crafted its own Bill of Rights and presented the document to the Government and People of Nigeria. The Ogoni Bill of Rights called for political autonomy of the Ogoni, in order to ensure that a fair proportion of Ogoni economic resources are used for Ogoni development, and that the Ogoni gain adequate representation in all of Nigeria’s institutions along with the right to protect the Ogoni environment and ecology from further degradation.

Still waiting for a response from the government, the Ogoni have gone ahead and initiated the process of building their own autonomy. In 2012, a referendum in Ogoniland saw a 98% or 813,000 votes in favor of establishing an autonomous Ogoni Central Indigenous Authority. The referendum only needed 66.7% in favor for the Ogoni to control their own affairs. As supported in Article 5 of  the United Nations Declaration on the Rights of Indigenous Peoples, this does not mean the Ogoni are looking to secede from Nigeria as MOSOP leaders said “political autonomy will not deprive the Ogoni people of the right to participate in the affairs of Nigeria”.  This is, in fact held as a right in the UNDRIP, as it says they also hold the “right to participate fully, if they so choose, in the political, economic, social and cultural life of the State”.

On February 3, 2012, the President of MOSOP announced the inauguration of the Ogoni Human Rights Watch Bureau. This body is to independently document human rights situations at the village or city level in a fair and competent method that is impartial to the parties involved. “The Human Rights Watch Bureau is a significant aspect of continual effort to structure and build institutions for the Ogoni Central Indigenous Authority”. MOSOP has urged all domestic and international institutions interested in human rights support in Ogoniland to work with the Ogoni Human rights Bureau as the legitimate grassroots body in Ogoniland.

The Ogoni Environmental Protection Agency was established in December of 2011. This was a measure taken to “make sure that Nigerian National Petroleum Corporation, Royal Dutch/Shell and others face compelling action to hold them accountable for environmental crimes against Ogoni (MOSOP 2011). A UNEP report on the clean-up of Ogoniland says, it is likely to take 25-30 years to complete the cleanup of Ogoniland as laid out in the report, the head of the Ogoni Environmental Protection Agency, Mr. John Lar-Wisa stated: “As a people, the Ogoni who depend on cultures, spiritual traditions, histories and philosophies, especially our rights to lands, territories and resources for political, economic and social survival, we cannot wait for another 25-30 years”.

As a framework to attract direct cooperation with public agencies and NGO’s worldwide, MOSOP has established education and health departments in Ogoniland. This 2012 effort is to boost the odds of helping the Ogoni people on the ground to be directly involved in their own affairs. MOSOP president, Goodluck Diigbo states: “the newly established Departments in Ogoni are part of tools needed to acquire data and information for rebuilding a new society that would counter Nigeria’s influence of corruption on Ogoni planning and development under the Ogoni Central Indigenous Authority”.

Constructing  Indigenous autonomy in postcolonial Africa comes with great difficulty. The recently created  neo-colonial states are desperately trying to prove legitimacy, cling to their power structures, and operate a rentier state in which much money can be siphoned off by those in power. In the case of the Ogoni in Nigeria, this rentier state has extracted resources from the lands of the Ogoni, kept the profits out of the hands of the local people, and destroyed their ability to continue their livelihood practices without severe health risks.

In building their own autonomous structures, the Ogoni are implementing a fundamental human right of self-determination, held by all peoples of the world. As discussed in a recent article by Jay Taber, Nations and states: Coexistence through Subsidiarity, there are degrees of self-determination. The Ogoni are implementing their self-determination through autonomy within the colonial state of Nigeria. They are not making efforts to leave the state, but to exercise their right in defining what relationship they will have with the state. They have chosen to build Ogoni autonomy within Nigeria.

The colonial construction of the identity of a ‘Nigerian’ is breaking down as assimilationist policies have proven a failure. Ogoni resistance is an example of this failure. Their construction of Indigenous autonomy among the violence and corruption of the Nigerian state is an exceptional process on the African continent.