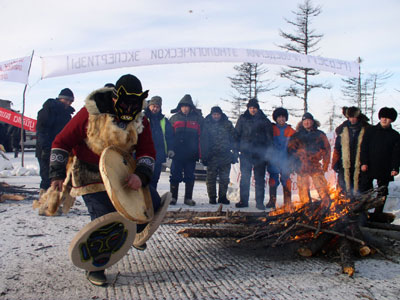 The Nearing Exctinction of Russia’s Indigenous

Over the past few years, policies for Indigenous People in Russia have effectively disappeared. But wouldn’t you know it, a new policy was formed not too long ago, resembling the same one we find all over the world today… The government passed Legislation that gave businessmen the right to purchase the traditional territories of Russia’s Indigenous People.

Naturally, businessmen have seized this opportunity; but they’ve been doing more than just buying lands. They’ve also been imposing on the lives of Russia’s indigenous.

As a direct consequence, according to Pavel Sulyandziga, a leader of Russia’s Association of Numerically Small Indigenous Peoples, several distinct Indigenous societies are being seriously pushed to extinction.

Living in 30 different regions throughout the country, Russia has approximately 280,000 Indigenous People, but some of the communities are very small. For instance, there are only 8 Kereks, 12 Alyutors, and 237 Entsy. Pavel warns that, at most, these and other small-numbered People have maybe one generation left.

Even some of the larger ones–the 41,000 Nentsy, 35,000 Evenks, and 28,000 Khanty–are at risk, having maybe two or three generations before they cease to exist culturally and then physically.

To give an idea of how bad things are, Pavel compares the situation to history–explaining that, while many “negative things” happened in Russia’s past, atleast both the tsarist government and its Soviet successor “supported the traditional economic activities” of Indigenous people, by allowing them to continue to hunt and fish on their lands. Now, with the businessmen made into their own little dictators, the people can’t even do that–unless, of course, they’re willing to hunt for their new ‘landlords’.

The situation might not be so ominous if the People where actually allowed to bid on their own lands–but the government goes out of their way to prevent that, by making sure they never find out a bid is taking place. “And if by chance they do learn about them,” Pavel says, local officials typically do everything they can to rule their bids out of order.

At the same time, Indigenous people are unable to get any kind of assistance from the government. Now, they don’t necessarily want any; but if they can’t hunt then they can’t eat, so they really have no choice but to seek help–and the government makes it clear there isn’t any.

Why do you need they help? they say. You have problems, everything alright…

With 60 percent of men and 90 percent of women unemployed, they can’t even get jobs to meet their needs. Meanwhile, overall life expectancy for indigenous People in Russia stands at 48 years, though there’s at least one Evenk community who’s life expectancy is no more than 27.

Life or Death?
For most people, it’s really not hard to put all this together and see what’s going to happen. One plus one equals two, right? Well, the Russian Government can’t seem to grasp that–or maybe they just don’t care. Unfortunately, we can’t exclude that possibility.

As for the People themselves, it seems as if they feel like they have no choice but to wait for death. By and large they are non-violent people, and being so isolated and (economically) resourceless it’s very difficult to organize, let alone avoid the over-bearing willingness of the Russian government to write them all off as criminals, and then treat them accordingly.

Despite this, their very existence depends on them standing up and defending their land and life. With all my heart, I hope they come to see the value in being counted among the World’s Numerically strong, as a People who did everything they could while refusing to become like those who don’t care about them one way or another.