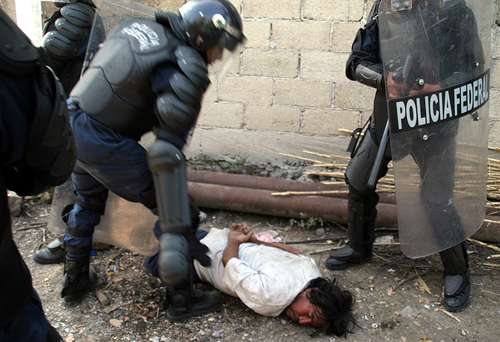 Earlier this month, police and military forces in Mexico were used against families in the indigenous town of Xoxocotla. Currently, there are reports of at least 70 people missing, of whom only 20 have been officially ‘arrested.’ See the video below for footage taken during the attack.

“The teachers of Morelos and the townspeople of Xoxocotla are united in a common struggle to stop the rapid privatization of public resources,” Berger explains. “Teachers on strike in Morelos are trying to halt a new set of educational reforms they say would open the doors to the participation of private capital in the public education system. Xoxocotla, on the other hand, is desperately trying to save the aquifer which feeds its municipal water system from being sucked dry from private condominium developers who skirt local zoning laws.”

Lasting for 11 days, on October 8th, Morelos Governor Marco Adame moved to put an end to the blockades.

A smaller group of police were initially sent to the highway, but they “were quickly outwitted by the highly organized women and men of the town. When police advanced on the roadblocks, the townspeople removed one of the barricades, allowed a few of them to enter, and then established the withdrawn barricade once again. These hapless police officers were trapped within the confines of Xoxocotla’s barricades. The officers were effectively penned in for several hours, during which they were unable to dismantle the roadblocks,” Berger continues.

“Later that night, between 500 and 1000 members of the Mexican Army from the 24th Military Zone barracks in Cuernavaca were given the order from the National Defense Secretary to assist police in their efforts to dislodge protesters in Xoxocotla. Accompanying these soldiers was a vast mobile arsenal, including humvees, tanks, and helicopters. It is important to note that such use of force can only take place under authorization from the executive branch of the Federal government.”

Soon after their arrival, a negotiating team from Xoxocotla was told that if the trapped police officers were not allowed to leave, an order would be given “to attack the town.”

“Shocked by the brazen display of military might,” says Berger, “the town let the police officers retreat and removed the road blockades. In return, they were promised that all security forces would leave.”

However, as a new day approached, the vast majority of police and military remained in place. Reports emerged of arbitrary beatings, illegal home searches, and detentions by police. By mid-day the people of Xoxocotla returned to the highway in protest.

“At that point, members of the State and Federal police, with the cooperation and participation of the Army, launched an attack of collective punishment on the entire town.

“Helicopters flew overhead and shot tear gas into private homes, most of which were filled with small children and whose inhabitants were not involved with the road blockades at all. This reporter was led into several homes the following day and saw several large spent containers and saw small children still coughing from the gas.

“Houses were raided by police and soldiers, and men taken and beaten in front of their families. There are reports of at least 70 missing persons, of whom only 20 have been officially ‘arrested.'”