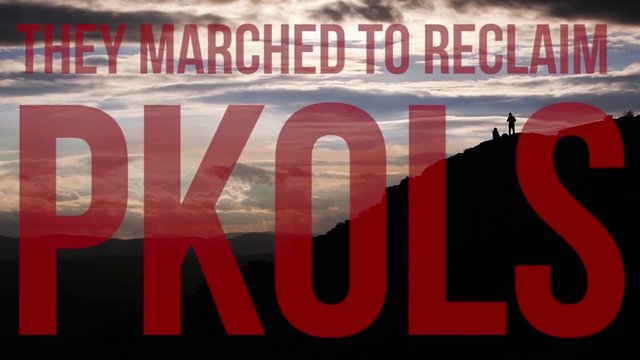 Made You look Media highlights the May 22 restoration of PKOLS (pronounced p’cawls), an historically-important meeting place and a part of the WSÁNEC Nation’s creation story, located in what is now the municipality of Saanich in British Colombia, Canada.

Coast Salish Territory — Chiefs of the WSANEC (Saanich) and Lekwungen (Songhees) First Nations, joined by an estimated 700-800 supporters from neighbouring First Nations and non-indigenous communities, have signed a joint Declaration Reclaiming PKOLS and installed a permanent sign at the summit of the promontory in Saanich, BC formerly known as Mount Douglas. The Declaration was signed during a ceremony at the summit on the evening of May 22nd, 2013, following a march and re-enactment of the original signing of the North Saanich Treaty with governor James Douglas at that location in 1852.

Here is the complete text of the Declaration:

We the undersigned indigenous nations of the WSÁNEC and Lekwungen Territories declare:

We have inhabited and governed our territories according to our laws and traditions, since time immemorial. Our connections to our homelands and spiritual places are ancient and profound, and our inherent authority over our territories has never been relinquished by Treaties of Peaceful Co-existence entered into with the early settlers, which did not involve the sale of rights or land.

Our place names offer a direct connection to our languages, sacred histories, and creation stories, and the reclamation of these names is vital for the continuation and resurgence of our cultures and knowledge.

Our elders have called upon us to return our original names to the places where they belong.

Therefore, we have come together to reclaim the traditional SENCOTEN name of PKOLS, currently known as Mount Douglas.

Stories of PKOLS, which can be translated as “White Rock” or “White Head”, go back to nearly the beginning of time for WSÁNEC people.

The current name does not represent our original connection to this land and was imposed without our consultation and consent.

The reclamation of PKOLS is in alignment with our natural laws, customs, and inherent rights as Indigenous Peoples and nations.

We are united to restore the original place name of PKOLS for the benefit of all people living on our territories, for our descendants, and for all who visit this spiritual place.

Therefore, in upholding our ancestral laws, rights and responsibilities, we declare:

We hereby reclaim and reinstate the original name PKOLS, and commit to working to restore original place names throughout our nations and territories. We call on all levels of government to recognize this reclamation.

We invite all nations to join us in celebrating and revitalizing our knowledge and history, so that it can be shared with the peoples of the world, and with all future generations.

Declared at PKOLS, WSÁNEC and Lekwungen Territories, this 22nd day of May, 2013, and affirmed by the following Indigenous nations.”

The Declaration Reclaiming PKOLS is attached along with photographs highlighting this unique event. Alongside the May 22nd Reclaim PKOLS Day of Action, the WSANEC nations led by WEC’KINEM (Eric Pelkey), a hereditary chief of the Tsawout First Nation, have written a letter to the Province of BC’s Geographic Names Office formally requesting that the name PKOLS be restored within the Geographic Names Register, replacing the colonial name Mount Douglas. A second letter to the District of Saanich proposes “jointly determining” an appropriate name for the municipal park surrounding the mountain.