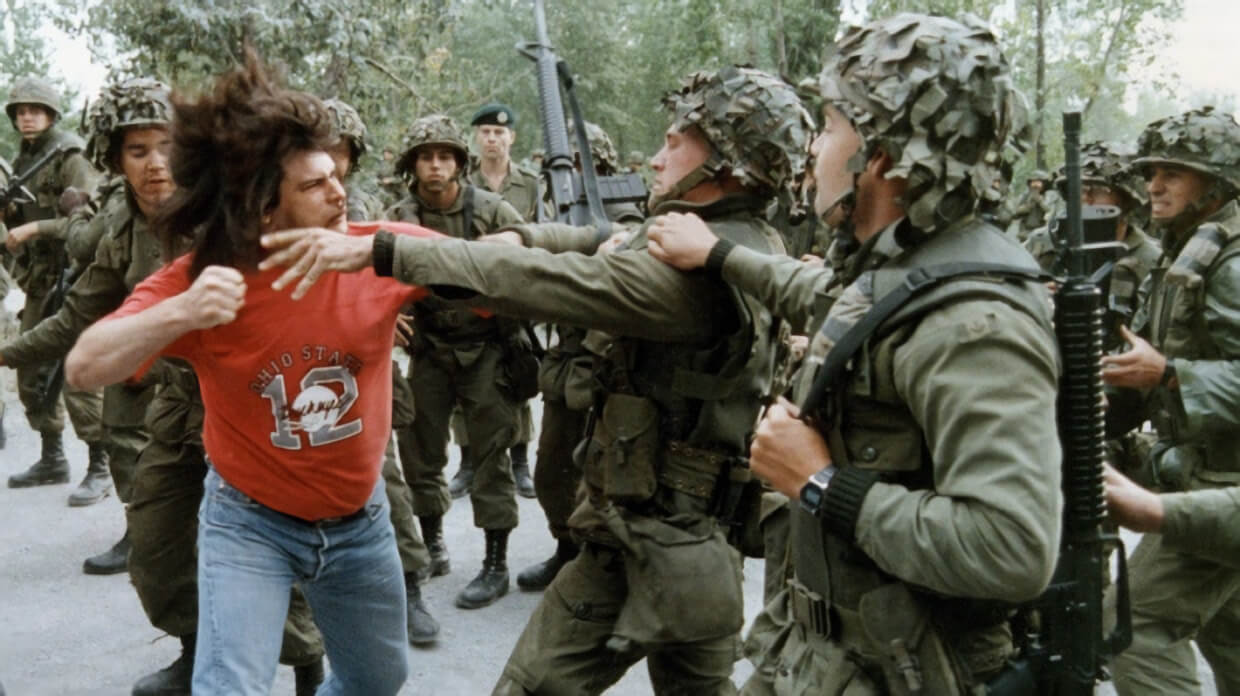 The legacy of Oka in an era of supposed reconciliation

An outnumbered fight: Mohawks fought for the rights to their land in 1990 on the Kahnawake reserve on Montreal’s south shore. (Tom Hanson / THE CANADIAN PRESS)
Support our journalism. Become a Patron!

Tensions are rising between the Kanien’kéha:ka (Mohawk) of Kanehsatà:ke and the Québec municipality of Oka.

During the last Oka conflict in summer of 1990, the federal government used military force to end a 78-day protest by Mohawks to protect a burial ground and prevent the expansion of a golf course and the development of luxury condos on unceded Mohawk land.

The conflict ended in a stalemate. Development stopped but the disputed land was not returned to the Mohawks.

Now, 29 years later, Mohawks have called on Prime Minister Justin Trudeau and the government of Canada to intervene to stop more unauthorized development on the unceded land.

All eyes should be on Canada’s response. So far, Trudeau is refusing to enter into negotiations. 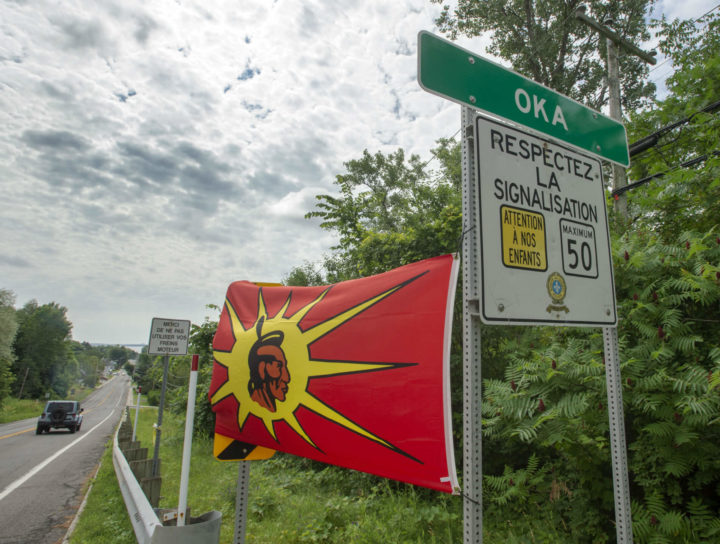 A Mohawk flag is seen at the border of Kanehsatà:ke and the town of Oka in July 2019 in Oka, Que. THE CANADIAN PRESS/Ryan Remiorz

I currently teach a course on the 1990 Oka conflict and I study the history of Indigenous-settler relations in North America. I am concerned that Trudeau’s inaction will spark renewed conflict.

For Canada to demonstrate it is serious about reconciliation, its leaders must address the root cause of the dispute: Stolen land.

The land at the centre of the dispute was fraudulently sold first by the Sulpician Fathers Seminary and then by the municipality of Oka, Que., and the government of Canada. The return of this land has been at the heart of Mohawk demands for more than 300 years.

Since the 17th century, Mohawks have attempted all means — from petitions and land claims to blockades — to have their land returned, without success.

In 1990, tensions boiled over. The municipality of Oka, which sits on the disputed land, approved a golf course expansion project and Mohawks set up a blockade to prevent the development.

In response, the Québec government sent in the provincial police. When a police officer was shot and killed during the police siege of the Mohawk blockade, the conflict escalated. Though no further deaths occurred, tensions in the area remained high.

The government of Canada intervened, deploying 2,500 troops to the area as a show of force. In the end, the conflict cost Canadian taxpayers an estimated $200 million.

The legacy of the Oka conflict is mixed.

As the troops and tanks left Kanehsatà:ke, the federal government established the Royal Commission on Aboriginal Peoples in 1991 to recommend ways to improve relations with Indigenous peoples across the country.

The commission’s 1996 report highlighted many issues, including the ongoing effects of the Indian Residential School system. This attention helped clear the path for the government of Canada’s apology to residential school survivors and the creation of the Truth and Reconciliation Commission, which has laid the foundation for reconciliation in Canada.

But reconciliation has mostly missed Mohawks in Kanehsatà:ke. The golf course expansion project was cancelled and the federal government purchased the land to return to the Mohawks. Yet the land has still not been returned. 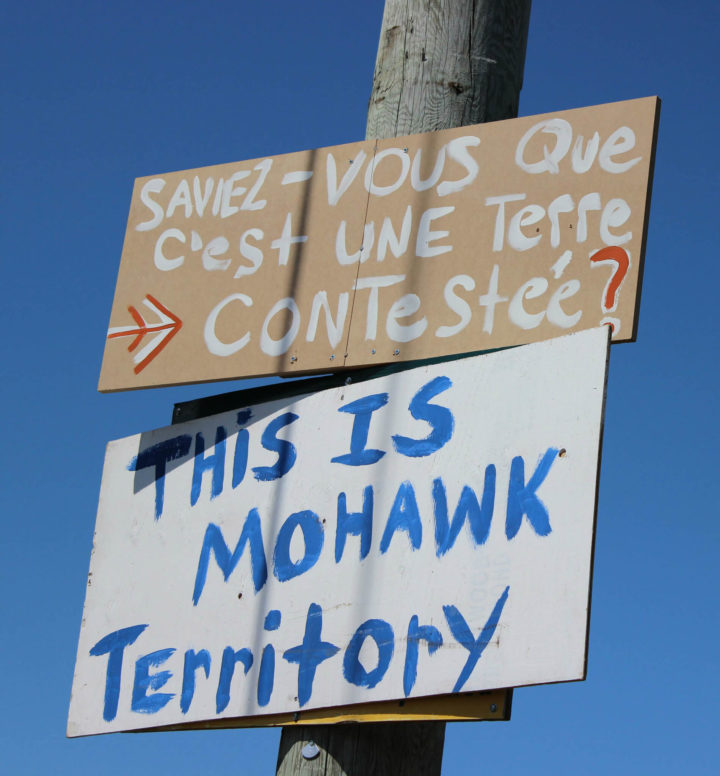 In the 2000s, developer Grégoire Gollin acquired the land, and in recent years he has been building houses on the disputed territory without Mohawk consent. Facing continued resistance by many community members, including Ellen Gabriel, who was the Mohawk’s spokesperson in 1990, Gollin announced in July that “in the spirit of reconciliation” he was willing to give 60 hectares to the federal government through a federal ecological gifts program.

This would prevent future development on part of the disputed land, but the land would still not be controlled by the Mohawk people.

Gollin’s land contribution is also contingent upon the federal government purchasing an additional 150 hectares of land in Kanehsatà:ke. If the deal falls through, Gollin has said that he will continue to pursue development projects on the disputed land.

As it stands, no one is happy with the unresolved situation. The mayor of Oka, Pascal Quevillon, told CBC News he does not want the Mohawk people to be able to reacquire their land for fear of being “surrounded” by Mohawks. He added fuel to the fire by calling on the federal government to send in the RCMP to protect Oka residents and their property.

In response, Mohawk activists held a news conference at the end of August to call on the federal government to intervene and negotiate a peaceful end to the dispute by returning the land once and for all.

As of early September, government officials are refusing to enter into negotiations. Many Mohawk people and Oka residents fear that further delay could lead to new conflict.

With the federal election in full swing, resolving the growing tensions in Kanehsatà:ke is an important litmus test for Canada’s commitment to repairing its relationship with Indigenous Peoples.

Trudeau was elected, in part, on a platform of reconciliation and improving relations with Indigenous peoples. Though apologies, financial compensation and renaming government buildings are important steps in the right direction, meaningful reconciliation in Canada also requires the return of stolen land.

Canadians, and the world, must pay close attention to the situation in Kanehsatà:ke to ensure that 2019 ends with negotiated peace and justice and not more conflict and bloodshed.