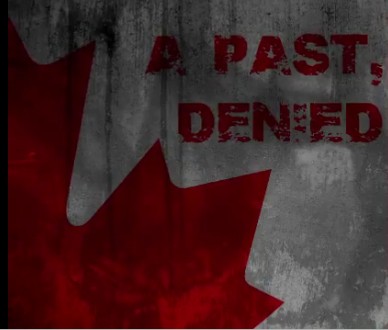 The Invisible History of Slavery in Canada

A Past, Denied: The Invisible History of Slavery in Canada is a feature-length documentary by independent filmmaker Mike Barber. The film, which is currently in production, examines the legacy of slavery in Canada and how this historical narrative has been kept out of Canadian classrooms, textbooks and social consciousness.

So much of Canada’s history has been buried beneath the beautiful white snow: from the legislated sterilization of Native women in Alberta and British Colombia, to the military testing of Agent Orange in New Brunswick, to the National Native government that stood for 180 years, until it was dissolved in 1840.

Among these and other historical narratives, we find the topic of Mike Barber’s upcoming documentary film, A Past, Denied: The Invisible History of Slavery in Canada. Two hundred years of institutional slavery in the Great White North.

“Canada is reputed as being the promised land to the North to where slaves could escape and live as free men and women,” says Barber. “The Underground Railroad is our claim to fame, and we toot that horn proudly. Our history textbooks—and much less, our national historical narrative—rarely, if ever mention the two centuries of institutionalized slavery and its role in the founding of Canada.”

Barber explains that, “The version of history [we are] taught in Canadian schools tends to serve the interests of nationalist pride rather than education.” That’s why “Figures such as René Bourassa, Colin McNabb, Joseph Papineau and Peter Russell have been made into historical icons, honoured in our texts and on our landscape. All were slave owners and some were rabid advocates of slavery, though today one would never know it.”

Once completed, A Past, Denied will expose this 200-year legacy for all to see; and it will “show the connections between the practice of slavery in the past with racial disparity, tensions, and racism in the present.”

Both matters are equally important, because, Barber explains, “There is a direct cause-and-effect relationship with our collective past and our collective present, as well as our collective future. To fully understand the context of current conflicts and events, we need to know the relevant past and its causal relationship. In his book Lies My Teacher Told Me: Everything Your American History Textbook Got Wrong, historian and sociologist James Loewen explains ‘slavery’s twin legacies’ to the present as ‘the social and economic inferiority it conferred upon blacks and the cultural racism it instilled in whites.’ Both of which, he adds, ‘continue to haunt our society.’ Removing this substantial part of our nation’s development from our historical narrative is not just an academic or moral problem. It has deprived and continues to deprive generations of the ability to identify ‘the dynamic interplay between slavery as a socioeconomic system and racism as an idea system.'”

It also prevents the average Canadian from coming to critical terms about their own identity and the deep-rooted sense of loss, desperation and insecurity present throughout the country, in most homes “on native land.”

Unfortunately, it may be some time before Barber will be able to complete the film for us. He recently pointed out on twitter that he’s still looking for funding; that is, “other than my own thin wallet.”

To learn more about A Past, Denied: The Invisible History of Slavery in Canada, visit http://apastdenied.ca