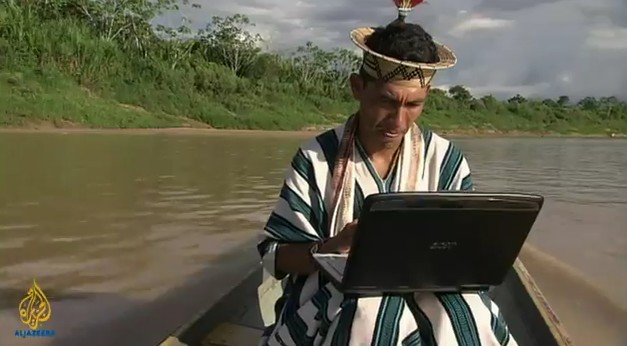 The Ashaninka live in a region of the Amazon Rainforest rich in tropical wood. Their land has been targeted by illegal logging gangs, who have killed and threatened the villagers. Now Ashaninka are fighting back and the internet is their weapon.

Synopsis
“The internet is our weapon. We gave up fighting with bows and arrows a long time ago,” says Benki Piyako, the son of the chief of the Ashaninka in the Brazilian rainforest. “We all need to be interconnected if we want to live in safety on our territory.”

The Ashaninka live on the border of Brazil and Peru. Their region is rich in tropical wood and regularly attracts illegal logging gangs.

When the tribe confronts the logging mafia their villages are attacked and the villagers killed or driven away. Benki explains:

“I’ve been threatened several times …. The attacks began when we tried to prevent their logging. The woodcutters felt their livelihood was threatened. As if we were taking something away from them.”

That all started to change a few years ago when a Brazilian NGO began equipping isolated indigenous communities with internet stations. This enabled the rainforest inhabitants to ask the authorities directly for assistance when they need it.

Illegal woodcutters are now apprehended because the military and the police can get to the territory very quickly and catch the raw materials pirates red-handed.

This gave a significant boost to the fight for the rights of the indigenous population, and the Ashaninka in particular made headlines because they are a living example of how to combine traditions with modernity and responsibility for the environment.

Today, the chief’s two sons, Benki and Moises Piyako, are working hard to provide more indigenous communities with internet access. They have also established an environment school where they teach sustainable farming methods, made their villages self-sufficient again and started reforestation.

Benki says: “We are striving for a new way of thinking, for respect between the peoples, and to protect our way of life.”

More Information
The Internet Indians is the final film in the award-winning 3-part series The Fight for Amazonia by Ilka Franzmann.

For more information about the series, visit filmquadrat-dok.de or contact info@filmquadrat.de