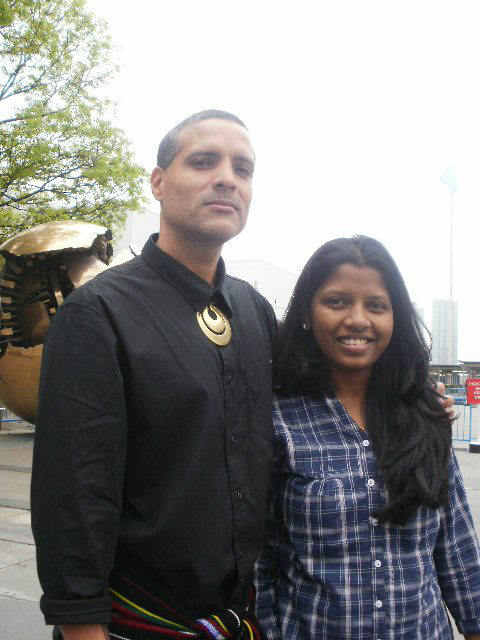 Damon Gerard Corrie & Meenakshi MundaI was fortunate to have met Mrs. Meenakshi Munda of the 2 million person Munda Tribal Nation of India, at the Tribal Link Project Access Global Capacity Training for Indigenous Peoples Training course; held in May 2012 in New York City USA. Meenakshi is a petite, attractive and soft-spoken soul, and I did not expect to hear of the myriad of issues she has already had to face in her young life.

Firstly, the reader may not be aware that there are over 80 million Indigenous Tribal Peoples in India; and more than 6,000 indigenous languages are spoken in India. Officially 8% of India’s one Billion national population is comprised of indigenous tribal peoples.

Meenakshi’s Clan & Totemic animal is the Oriya (a native bird), and this was inherited by her from her father’s side of the family; members of the Clan are forbidden from doing any harm to this animal. They must respect and protect it instead.

This blends into another point that she raised which is the misrepresentation of animist Tribal peoples such as hers as being ‘Hindus’ instead of their true religion which is Animism. The Indian Government census recorders generally (and it is THEY who fill out these forms not the Indigenous Peoples themselves) say things such as “Oh – you are nature worshippers? Well that is like Hinduism”… so they mark the Tribal Peoples as ‘Hindus’.

If you think about it, there is a great likelihood that official statistics in India have exaggerated the percentage of ‘Hindus’ by over 80 million persons (the number of Indigenous Tribal Peoples resident in India).

There are six ‘scheduled areas’ where the ‘scheduled Tribes’ exist in the State of India. ‘Scheduled’ is the old Colonial era British terminology that persist in the legal jargon of modern day India, it simply means ‘Indigenous’. True to British form, the laws in India are all very diplomatically crafted (rather craftily) to sound convincingly comprehensive…but only in the vaguest way imaginable (if that makes sense to you).

To put it another way – and give but one example, examine this National Law: “Tribal Lands are NOT to be sold or leased to non-tribal peoples”…’Officially’…..sounds pretty straightforward right?

But rampant corruption and bribery (not to mention ‘legal loopholes’) that has infected all aspects of Indian Civil Service – to the point where it has become a ‘National Malaise’..and this consequently; results in this law (and many others) being circumvented and openly flouted daily all across India .

Were it not so, the indigenous Tribal Peoples of Jharkand State (where the Munda Tribal Nation has it’s traditional territory) would actually be able to enjoy a higher and more equitable standard of living. Jharkand is a mineral rich State in India that used to supply 40% of the coal, and 2% of the Uranium that India needs annually. Instead of the Indigenous peoples reaping the benefits of these activities – it is the Multinationals who are doing so, and they are achieving this with the collusion of corrupt officialdom; who are giving them ‘legal looking’ contracts to usurp indigenous tribal lands at will.

The irony of this ‘economic boom’ underway on indigenous territories – is that the Indigenous Tribal Peoples are being forced to migrate to the urban centers to SEEK employment, due to the fact that only skilled labour is required by the multinationals who have come into their lands; and the vast majority of tribal peoples possess only limited formal education.

This lack of empowerment and economic opportunities leads only to the lowest paying forms of labour in the towns and cities however, with roles such as maids, nannies, cooks, clothes washers, cleaners etc. For this they are lucky to get paid the equivalent of US$1 per day – less if child labour is involved (another ‘officially illegal’ but widespread practice)…though the official minimum wage is supposed to be US$4 per day.

Getting back to the issue of education though….The Government of India recently announced a very noble sounding policy called ‘Educate all’ which is actually leading to a drop in educational standards all over India, how? Due to the fact that teachers have been instructed by India’s Ministry of Education (unofficially) to ‘pass’ students even though they may have actually failed their exams…..why would they do such a thing you may wonder? Well, when you want to show the rest of the world ‘official statistics’ that PROVE how your society is ‘advancing by leaps and bounds’ and producing incredible numbers of formerly educated graduates each year……you get the point now right?….Yes, truly ‘incredible’ achievements indeed….

The last and most upsetting issue facing the Indigenous Tribal Peoples of India today however, is the fact that they are often caught in the middle of armed conflicts; with paramilitary forces (locally called ‘Naxals’ – which means ‘those against the system’ ) on one side and the government security forces on the other….with both sides often inflicting serious injustices on the indigenous who have nowhere to turn for refuge. Rapes, tortures and extra judicial killings are commonplace.

It does not help when the media they turn to – to draw attention to their suffering in a last ditch attempt to have redress in the Court of Public Opinion – are entirely biased against them and refuse to publish anything they have to say; publishing only the official government ‘version’ of events.

Meenakshi (who is also the Chair of the Asia-Pacific Indigenous Youth Network) expressed her gratitude for having benefited from her two-year training course (2011-2012) thanks to the Tribal Link Foundation, she feels it has taught her an incredible amount about how the United Nations Permanent Forum actually functions, as well as being expertly informed in a readily understandable way – about a myriad of various UN affiliated entities such as the Convention on Biological Diversity, the Nagoya Protocol, as well as establishing contacts and lines of communication with various donor agencies both inside and outside of the United Nations framework. Last but not least – the networking opportunities and bonds of solidarity and support that this training bestows to ALL who experience it. Her desire is that other indigenous brothers and sisters from India will likewise be availed the unique opportunity to benefit from the sound training that the Project Access Global Capacity Building for Indigenous Peoples training course offers.