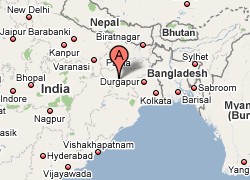 The Holy business of Mittal Company

Gladson Dungdung, a Human Rights Activist and writer from the Indigenous community of Jharkhand, examines Arcelor Mittal company’s recent attempt to forge an alliance with the Christian Church–as a way of undermining indigenous peoples in Jharkhand, who refuse to sacrifice their land and their way of life for the company’s development interests.

The global steel giant Arcelor Mittal Company is struggling between despair and hope in the mineral-rich state of Jharkhand. The Company signed a MoU (Memorandum of Understanding) with Jharkhand government on October 8, 2005 for setting up a steel plant with the capacity of 12 million tones per annum at an estimated investment of Rs 40,000 crore. In addition to the steel plant, the Company has also proposed to set up a 2500 megawatt mega power plant and mining projects in the state. The company requires 25,000 acres of land and 20,000 units of water per hour for the steel plant and a township in Torpa-Kamdara region of Khunti and Gumla district. Besides, a mega Dam will also be constructed at Koel-Karo River for ensuring the water supply to the steel plant. According to the plan, the steel plant will be set up by the end of 2009 and the production will begin from 2012. Consequently, there will be a mass displacement of Adivasis as 256 villages would be affected completely by the project.

The people of Jharkhand especially the Adivasis have been undergoing through the adverse affect of the unjust modern development processes for more than a century therefore the people’s resistance against displacement is rampant across the state. There also has been a mass movement against the Arcelor Mittal Company in the Torpa-Kamdara region under the banner of “Adivasi-Moolvasi Astitava Raksha Manch” [Forum for the protection of tribal and indigenous people’s identity] for last three years. The people are resisting against industrialization in the region and not ready to give even one inch of their remaining lands. They have declared that “they need grains not iron for feeding their stomach”. Consequently, the Mittal company is unable to enter into the region in spite of playing many tricks of trade i.e. luring people through the $300 million CSR programmes, establishment of an ITI institute in the region, development of hockey, revival of Adivasi culture and so on. But the unending mass movement is going on against the steel plant, which is the first jolt to the company as it has a huge expectation of economic gain by establishing a steel plant in the state.

The Arcelor Mittal Company faced second jolt by the global recession as it operates in 60 countries and it has plants in 20 countries in the globe but the past one year has been particularly severe on the Company. The demand of company’s steel went down to 10 percent and its share fell down by 7 percent. The company had to cut production in Canada by 45 percent and axed 9,000 employees. It also cut the job of 1000 employees in lowest cost plant in Poland and shut one out of its two blast furnaces in west Belgium. The Company has also planned to idle a plant in East Chicago and lay off another 400 workers. The company had total workforces of 3,26,000 which was cut down to 3,15,867 consequently, 10,133 people have already lost their jobs in the company so far. The company has net loss of 50 billion pounds, which led to holding on one plant in china and two plants in India including one in Orissa and another in Jharkhand. The company has also decided to establish 3Mt steel plants in Jharkhand and Orissa instead of 12 Mt. The present status shows that the company is totally failure in protecting the rights of its employees therefore it can not generate new job opportunities and is struggling for survival.

But even in these circumstances, the company is ready to go ahead with its plan of establishing new steel plants in Jharkhand and Orissa. The company has come up with a new strategy for entering into the proposed project area in Jharkhand, where people are resisting against it. The company made a new holy business strategy to join hands with the church based social services institutions as the region is highly dominated by the Christians Adivasis. Earlier, the vice president of the Arcelor Mittal Company, Remi Boyer, who has more faith in the holy business for overcoming on the mass movement, had said that the church is ready to co-operate the company in land acquisition. Recently, the Arcelor Mittal Company and Don Bosco Society made an agreement for holy business, under which the company would bear the cost of ITI training for youth of the proposed project area and the Don Bosco Society would provide training in its ITI centre based at Kokar, Ranchi. They had jointly published an advertisement in the local newspaper asking youth of the particular villages to apply for the purposes. But when it came into the notice of a forum of Adivasi called “Jharkhand Indigenous People’s Forum”, it intervened on the matter immediately.

The forum wrote a letter to the Superior of the Don Bosco Society and another letter to the Cardinal Telesphore P. Toppo asking them to make their stance clear on the issue of supporting Arcelor Mittal Company. They also asked the Church leaders whether they are committed to the cause of Adivasis or they have joined hands with corporate merely for economic gain through the holy business. The forum members also threatened for mass resistance including rally, protest and locking up the ITI Centre of Don Bosco. The forum released its plan and strategy of mass resistance through the media, which created an upheaval in the church arena. Consequently, the Church leaders and the Superior of Don Bosco were in a huge pressure.

Finally, the Don Bosco Society made it clear that it operates in Jharkhand only for the upliftment of Adivasis, Dalits and poor therefore it will not tie up with any corporate house, which takes away the rights of the marginalized communities. But does it mean everything is goody-goody with the church based institutions? There are global reputed institutions like XISS, Ranchi, XLRI, Jamshedpur and XIM, Bhubneshwar, which have more contribution to the corporate world than the community development particularly the Adivasis. These institutions carry out number of studies for the corporate on one hand and the most of their students also join the corporate, which take away the rights of the Adivasis, Dalits and poor on the other but the holy priests do not bother about it and carry on their holy business in every walk of their lives.

Obviously, the u tern of the Church leaders and the Don Bosco Society on the issue of joining hands with Arcelor Mittal Company is a huge setback to the Company. The marriage between the Don Bosco Society and Arcelor Mittal Company was broken even before the honeymooning, which shocked the company most. Now the company is left alone but it would surely come up with a few more new strategies to trick the land owners. On the other hand, the Adivasis have declared several times that they will surrender their lives but not land, which belong to their ancestors. In these circumstances, the Church leaders must have to think radically before joining hands with the corporate whether they are committed to the cause of marginalized people or doing business unconsciously against the principle and ethos of Jesus Christ. The holy business of the Church with the corporate can not be justified.

Gladson Dungdung is an Activist and Writer based in Ranchi, Jharkhand. He can be contacted at gladsonhrights@gmail.com. You can find more writings by Gladson at indigenousindia.blogspot.com and crejjharkhand.blogspot.com