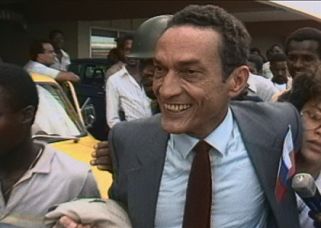 Directed by Johnathan Demme, The Agronomist is a documentary about the life of Jean Dominique, a respected Haitian journalist and human rights activist who’s life was dedicated to the Haitian People.

Described by his family as “an agronomist without land,” Jean was a source of hope and inspiration throughout his entire career. He survived years of threats and beatings at the hands of Duvalier’s Tonton Macoutes and was twice forced into exile—only to be assassinated as he arrived for his morning news program on April 3, 2000.

During the 1960s, he founded Haiti’s first film club, and then made one of Haiti’s first documentaries, “But, I Am Beautiful.” After this he joined Radio Haïti as a reporter. A few years later, he purchased the station’s lease and began broadcasting in Kreyòl. Though is was spoken by most of the population, the language never before held a prominent place on the radio. In so doing, he “pioneered a revolution in mass media communication in Haiti by embracing Haitian Creole as the medium of choice and giving voice to the poor and the oppressed,” said Jocelyn McCalla, NCHR Executive Director, in a statement released shortly after the assassination. “Many came forward to follow in his footsteps and champion basic liberties and freedom of the press. His death is a great loss at a critical time for the country.”

From Wikipedia – In the final years of his life, Dominique concentrated on issues of corruption and negligence. He criticised a pharmaceutical firm, Pharval Laboratories, for selling contaminated cough syrup that was responsible for the deaths of 60 children. Dominique also took on a former police chief Dany Toussaint (a former Haïtian Senator), whom he accused of having his rival for the position of Secretary of State for Public Security, Jean Lamy, assassinated. As a result of this, Toussaint’s supporters surrounded and attacked the radio station building. The New York Haïtian radio station Radio Liberté had also reported that Dominique had received death threats via Toussaint’s lawyers. This led Dominique to state “I know he has enough money to pay and arm henchmen,” he said. “If he tries to move against me or the radio station and if I’m still alive, I’ll close the station down and go into exile once again with my wife and children.”

Dominique had also been strongly critical of United States policy towards Haïti, the Aristide government and, towards the end of his life, the role of Dany Toussaint within Aristide’s political party Fanmi Lavalas Party (which had evolved out of the original Lavalas Party).

“I know that he [Dany Toussaint] has weapons. I know that he has the money to pay and arm his followers. Here, I have no other weapon than my journalist’s pen. And [with it] my microphone and my unquenchable faith as a militant for true change. And let me be perfectly clear, I will not turn over to any freeloader in the world a monopoly over Lavalas, no matter who it is!”

On April 3, 2000, Dominique was shot four times in the chest as he arrived for work at Radio Haïti. The station’s security guard was also killed in the attack. President René Préval ordered three days of official mourning, and 16,000 people attended his funeral at a sports stadium.

There have been numerous inconsistencies in the investigations into the murder, including the mysterious death of a suspect. Pharval Laboratories and Senator Toussaint came under suspicion as a result of the murder. Toussaint was the prime suspect. While the Pharval somewhat cooperated with the inquiries, Toussaint claimed parliamentary immunity and refused to testify. The first investigating judge, Claudy Gassant, fled to the United States after suggesting that Toussaint be charged over the murder. Despite this, Gassant’s superiors decided that no charges would be laid. Under increasing international pressure, the Aristide government arrested three alleged gunmen Ti Lou, Guimy and Markington, but they were never charged. These three men all mysteriously escaped under the U.S. installed government of Gerald Latortue.