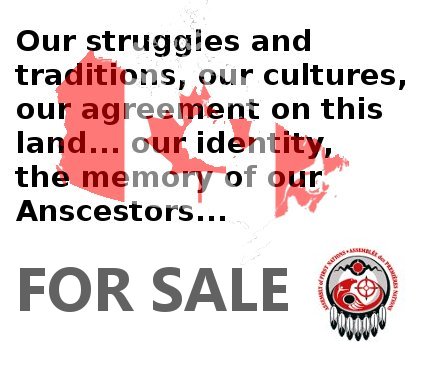 The AFN Wants to Save North America

In just a few short weeks, an impressive group of well-dressed politicians, members of the business community, and so-called First Nation leaders will gather in Toronto for “the largest-ever” Indigenous economic development conference, the Inter-Nation Trade & Economic Summit (INTES).

Proclaiming it a win-win “for all Canadian citizens”, AFN Executive Phil Fontaine tells us the summit will offer an unparalleled opportunity to raise indigenous people from the economic dead zone they find themselves in, while single-handedly provide a way to save “the North American economy.”

Fontaine states, “In these uncertain economic times, First Nations have the potential to make an enormous contribution to renew and revitalize the North American economy… With a growing land base and the fastest growing segment of the Canadian population, we are positioned to be major players in regional and national economic development.”

Looking past the rhetoric, there may be some merit to his words. After all, it’s hard to organize a revolution when your kid suffers from convulsions every day, and your whole family’s dying of cancer.

Simply stated, we need some relief. A way to take care of our families otherwise all the protests and roadblocks and other efforts we organize won’t mean a thing.

For that reason alone, INTES may be uselful. But even so, can we afford this strictly-economic relief if it’s going to come at the expense of indigenous social, cultural and political identity – not to mention the environment? Because that is the price of doing business here.

And let’s not forget the most obvious problem… what happens when the Band Council Managers (Chiefs) suddenly come in to a massive downpour of ‘the big bucks’?

Does anyone really believe they’ll do what’s right for the community? History tells us that, first and foremost they will do what’s right for themselves. Who knows, some of them might even pool their money together and set up a new golf course right in the middle of the tar sands! You never can tell when ‘personal want’ is allowed to take precedence over the needs of community.

As for the communities themselves, history also tells us, the Chiefs will follow Canada’s example and take the cheapest and most convenient routing possible… without the involvement, consultation or consent of the people.

Appropriately, Fontaine’s own words illustrates this. He says the money will be used to invest in “education” (to indoctrinate indigenous youth with Canadian wants and mores), to turn communities into workforces to augment “the North American Economy” (rather than develop a genuine and separate economy based on traditional values of trade and commerce); and somewhere along the way, on the bright side, to (somehow) address the housing and water crises currently facing more than 100 reserves.

Overall, the benefits held by this grand economic scheme have a measure of importance, especially if it does resolve the housing and water crises. However, at the same time it brings “the Canadian Dream” one step closer to reality.

That dream is 500-year-old nightmare for those of us who remember, and who have only just begun to learn who they are, because it demands we hollow ourselves out, and disappear into the pseudo-multicultural melting pot that is Canada.