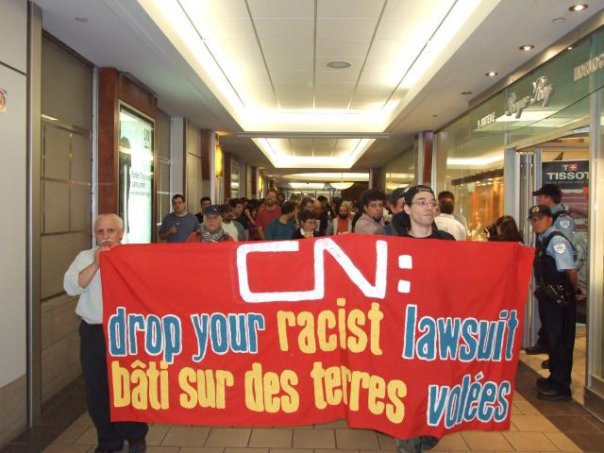 Tell CN Rail to drop the lawsuit! against Tyendinaga Mohawks

The Tyendinaga Support Committee is putting together a month-long campaign to pressure Canadian National Railway (CNR) to drop their recently announced lawsuit against members of the Mohawk Community of Tyendinaga.

They are asking individuals and groups interested in supporting the campaign to take on three tasks:

Support the Mohawks of Tyendinaga

Call out for a month-long phone and fax campaign

Canadian National Railway is suing Shawn Brant, Jason Maracle, and Tara Green as well as their families and community (Jane and John Doe, also named in the suit). CN’s lawsuit is a response to a blockade on CN tracks during April 2007, and another lawsuit against Shawn Brant for a blockade on June 29, 2007. CN has not yet specified the amount in damages they are seeking.

Statements of defence and counterclaims have been filed against CN, claiming that CN pollutes Tyendinaga lands, creates a nuisance by the noise their operations cause, and scares away game. CN has filed a motion asking the courts to strike much of these counterclaims.

That motion will be argued in open court on April 7.

Supporters of the ongoing resistance in Tyendinaga are being asked to demonstrate their solidarity by faxing (preferable) or emailing letters to CN during this critical court case. Below is background information and a sample form letter that can be modified and emailed or faxed to CN headquarters.

We are holding the phone and fax campaign from April 1st to 31st.
We are encouraging supporters to fax or phone because these are more effective ways to pressure CN, but if you interested in sending an email please also BCC indigenoussolidaritymontreal@gmail.com so we can track the campaign.

There are two important dates we are asking supporters to focus their faxes and phone calls around:

The first is April 7th, the first day of court in the injunction process mentioned above. The second date is April 21st, date of CN’s shareholder meeting in Calgary.

I am writing to encourage you to drop CN’s lawsuits against three activists, Shawn Brant, Jason Maracle and Tara Green, of the Tyendinaga First Nation.

In April and in June of 2007, some of the Tyendinaga Mohawks blockaded a CN rail line between Toronto and Montreal in protest against the injustices suffered by their First Nation. Specific issues included their impoverishment and the lack of action with respect to the pollution of their water so that it is not fit to drink or even to bathe in and with respect to the return of lands that were unlawfully taken from them. Shawn Brant has spent months in jail as a result of his participation in those blockades.

It is my opinion that CN (and the previous railroad companies that became part of CN) played a significant role in creating the impoverishment of First Nations people, and that CN continues to unjustly profit from its so called “rights of way” through First nations territories. I feel that it is completely inappropriate for CN to pursue these lawsuits in these circumstances.

Your website claims that “CN seeks to promote a harmonious working relationship with the many Aboriginal communities along its rights-of-way across Canada… through a climate of mutual trust and understanding”.

Your continuation of these lawsuits is not an act of mutual trust.

I understand that lawyers representing CN will be arguing in a Toronto court on April 7, 2009 that much of the statements of defence and counterclaims of the Defendants should be struck out. I urge you to reconsider and to instruct your lawyers to simply drop the lawsuits.

Tyendinaga is a Mohawk community located on the shore of the Bay of Quinte between Toronto and Montreal, in eastern Ontario. The Mohawk Nation is one of the five original nations of the Iroquois Confederacy.

As part of long-standing struggles for land and self-determination – including unresolved land claims, poverty, suicides and polluted water — members of the Tyendinaga Mohawk community have organized to defend their territory. In particular, several actions, including blockades, have taken place to expedite the slow negotiation process over the Culbertson Tract, a piece of land the government has long acknowledged was taken illegally from the Mohawks. A quarry on the land was reclaimed in March 2007, and Mohawks have maintained a fulltime presence on-site ever since.

CN is seeking damages for lost revenue as a result of the blockades. Though CN has not yet named the amount of money it will seek in the suit, we understand this threatening process as a blatant form of financial persecution against Jason Maracle, Tara Green and Shawn Brant as well as their families and community (Jane and John Doe, also named in the suit). We also see it as an attack on the struggles of Native peoples to obtain justice in the face of ongoing neo-colonial attacks on their sovereignty and lands.