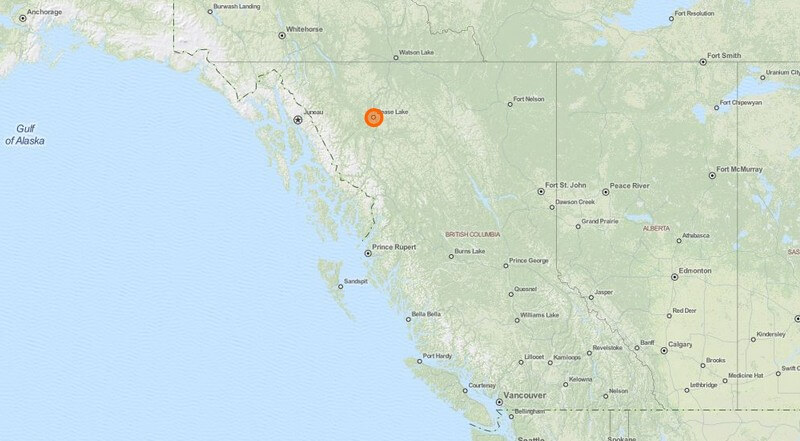 Approximate location of the Red Chris Mine (OSM)
Support our journalism. Become a Patron!

On Friday, August 8th, a group of Tahltan Nation elders known as the Klabona Keepers began a blockade of Imperial Metal’s Red Chris Mine near Iskut in Northwestern British Columbia.

The Indigenous protesters blocked access to the mine and demanded that Imperial Metals’ employees stop working. They also prevented diesel fuel trucks and shuttle buses full of mine workers from entering the site.

The blockade was set up due to fears of another disaster like the recent Mount Polley Tailings breach on August 5th, which occurred when a fortification that was holding mining waste collapsed, causing toxic chemicals such as arsenic and mercury to flood into the Halzetine Creek and Quesnel Lake. This leak caused a state of emergency and drinking water ban in the surrounding area.

Imperial Metals president, Brian Kynoch, apologized for the breach. “If you asked me two weeks ago if this could have happened, I would have said it couldn’t.”

Imperial Metals had been issued repeated warnings by the Ministry of Environment and was also warned by a previous foreman at the mine, Gerald MacBurney.

The mine is currently in development and is scheduled to open later this year.

The Tailings Pond Breach is also driving concerns about Ruddock Creek Mining Corporation, a subsidiary company of Imperial Metals, and their ambition to operate an underground zinc and lead mine. Environmentalists fear that an accident there could impact Oliver Creek and the Bull Trout that inhabit its waters.

Just today, the Neskonlith Indian Band released a statement saying that they have issued an eviction notice for Imperial Metals. Chief Judy Wilson said, “Imperial Metals failed to properly protect Secwepemc land and waters and our traditional and current uses in our territory (Secwepemculecw).”

The Secwepemc are a part of the 17-band Shuswap Nation which currently occupy south central British Columbia.

Wilson further stated that if the eviction is not complied with, they will blockade the Ruddock Creek Mine.

According to The Tyee, there were negotiations between Red Chris employees and the Tahltan protesters in which the employees assured them that the tailings pond by the mine was safe. However, the Klabona Keepers and the younger Talhtan members remained unconvinced, saying that, “Business as usual is over.” According to a Mountie on the scene, there would have to be a court injunction before the blockade can be dispersed. The Tyee went on to say that the Keepers are not letting any Red Chris Mine employees into the site, “until they say so.”

The Klabona Keepers is an organization made of people of Stikine and Tahltan ancestry who, according to their website, “occupy and use traditional lands near Iskut, British Columbia known as Tl’abāne.”

Tl’abāne refers to the area known as the Sacred Headwaters: the Stikine, Skeena, and Nass rivers, which are near the site where the recent breach occurred.

As the Klabona Keepers remarked nearly one decade ago, in the Klappan Declaration,

“To those who would despoil our homeland, we say this: we will never dishonor those who have gone before us, and whose bones are now part of the earth beneath our feet. Long ago our people established laws to protect the land and waters and the animals and plants that live among us. We have a solemn duty and responsibility to those who came before and those to follow to protect this place. It is a Sacred Trust given to us, and which no one can deny. Our title to these lands, and our responsibilities to it, remain unextinguished, and in full force and effect under our laws and customs.”

The Tahltan Central Council, while not endorsing the blockade directly, President Chad Norman Day did say, “We have reached out to the Klabona Keepers and are keen to discuss their intentions behind the blockade. We share their concerns in protecting the Tahltan environment, culture and our local communities into the future. We are and will continue to do everything in our power to make sure the Tahltan Nation avoids serious environmental issues at the Red Chris Mine.”

Although the Mount Polley breach is one of the worst environmental disasters to hit Canada in at least two decades, Imperial Metals has said that the breach will not delay the opening of the Red Chris Mine. Currently, local residents cannot bathe or drink in the water until British Columbia investigators conduct further tests on the water.