The “Kanbauk to Myaing Kalay” gas pipeline in southern Burma is a guideline for “systemic, shocking and ongoing” human rights violations, according a new report by the Human Rights Foundation of Monland (HURFOM). 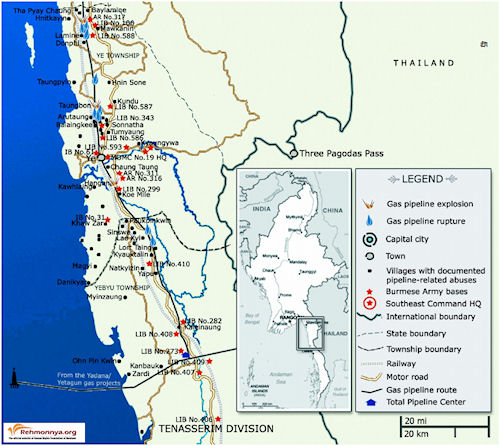 It goes all the back to day one, says the report, when the government seized approx. 15,000 acres of land to make way for the pipeline.

The villagers received little or no compensation. In fact, once the land was “secured” and then heavily militarized, villagers were “forced to work as unpaid forced laborers on the construction of the pipeline.” Even children as young as 12 were forced to clear timber and brush, dig and fill trenches and haul materials.

“Nearly a decade after construction of the pipeline was completed, villagers continue to be required to work as forced laborers; not only must
villagers work to help maintain the pipeline, they must stand sentry and patrol it, under constant threat of violent retribution should an attack or accident occur,” says the report.

“The abuses described above are the predictable result of deploying large numbers of soldiers and encouraging them to extract what they can from the countryside, without oversight,” states HURFOM in a recent press statement. “But abuses along the pipeline are also a deliberate, calculated part of the pipeline security effort.”

And the abuses are most assuredly ongoing. “In the 5 days that have passed since printing the report [on May 1, 2009],” says HURFOM, one villager was executed and the 36 homes were burned to the ground. “In both cases, the army committed the abuses less than a mile from the pipeline”.

“This report is released at a critical juncture,” HURFOM continues. “Intense competition for access to Burma’s abundant natural resources continues, with China recently agreeing to purchase gas that will be transported 1,200 miles across Burma. Debate on appropriate response to Burma is renewing, as the international community questions the wisdom of strict sanctions and considers potential for increased humanitarian support. In the foreword to Laid Waste, HURFOM’s director Nai Kasauh Mon welcomes the renewed discussion. But he urges caution and calls on the international community not to lose sight of experiences like those documented in Laid Waste. ‘Discussion is healthy and appreciated,’ says Nai Kasauh Mon. ‘But there should be no question: projects like the Kanbauk to Myaing Kalay gas pipeline do not benefit the people of our country.”

If you wish to download a PDF copy of Laid Waste, visit rehmonnya.org. Hard copies of the report, as well as print-quality photos for news publication can also be obtained by emailing monhumanrights@gmail.com.

Questions or requests for interviews in English, Mon and Burmese should be made by emailing hurfomcontact@yahoo.com or calling +66 (0)81 365 9140.