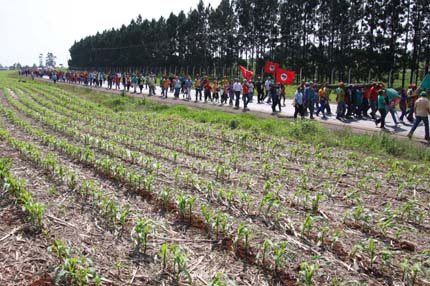 Marking the end to a violent conflict over land in Brazil’s Parana state, the swiss-based multinational Syngenta Seeds has announced that it will hand over its experimental farm to the state government.

The decision comes after more than a year of pressure from land activists and human rights groups who maintained that the 127-acre farm — where Syngenta was testing various strains of Genetically modified soya, beans, and corn — was previously identified as a possible settlement for landless families. They demanded Syngenta’s removal, stating further that they may also be in contravention of an environmental zoning law.

The government of Parana was also putting pressure on Syngenta, going so far as to charge them with the crime of planting genetically modified corn and soy — which the state previously outlawed. The government indicated that their hope was to confiscate the farm and transform it into an educational center for environment-friendly agriculture.

“The handover [also comes on the eve of] the first anniversary of the killings of Valmir Mota de Oliveira (known as Keno), a leader of the landless workers movement (MST), and Fabio Ferreira, one of Syngenta’s security guards,” explains Amnesty International.

Leading up to their deaths, members from La Via Campesina and the Landless Workers Movement (MST Brazil) peacefully occupied the farm in protest.

“Hours after the occupation, 40 armed men entered the farm and shot MST leader Keno dead in the chest at point blank range. One of the security guards, Fabio Ferreira, was also killed. At the time the police suggested he was accidentally shot by his colleagues, though prosecutors later charged a member of the MST with the killing, informing Amnesty International that these possibilities had to be tested in court. Eight others were injured in the attack, including MST member Izabel Nascimento, who was beaten unconscious and remains in a coma in hospital, in a critical condition,” Amnesty continues.

The trial of those accused of murdering Keno and Fabio Ferreira is set to begin sometime this month.

As for the farm, the state has promised to use it for the production of indigenous seeds which will then be distributed to struggling farmers and countries throughout the south that have suffered devastation from hurricanes.