The Matawai village of Jacobkondre in the early morning hours. Credit: Rafael Jantz
Support our journalism. Become a Patron!

The Matawai of Suriname, a community that once felt forgotten by the rest of the world, is breaking ground by using a new open-source geostorytelling app to create an extraordinary repository of traditional knowledge through oral history storytelling. The goal of the work is to ensure that future generations of Matawai will be able to learn about their history, culture, and identity in the way that their people always have: through the words of the elders.

The story of the Matawai is one that begins over three centuries ago, when Suriname stood as a Dutch plantation colony. Rather than endure a cruel and punishing life of captivity on the colony’s coastline plantations, scores of African enslaved peoples took destiny in their own hands and escaped into the dense rainforests of the country’s vast interior. Bands of fugitives fled along the ascending rivers, leading them as far southward as they could. They evaded and battled with Dutch soldiers who sought to recapture them, embarked on raids to liberate others from slavery, and eventually forced the colonial government to sign a peace agreement with them.

Different groups of these formerly escaped slaves established themselves in the center of Suriname’s interior, where their descendants continue to reside. 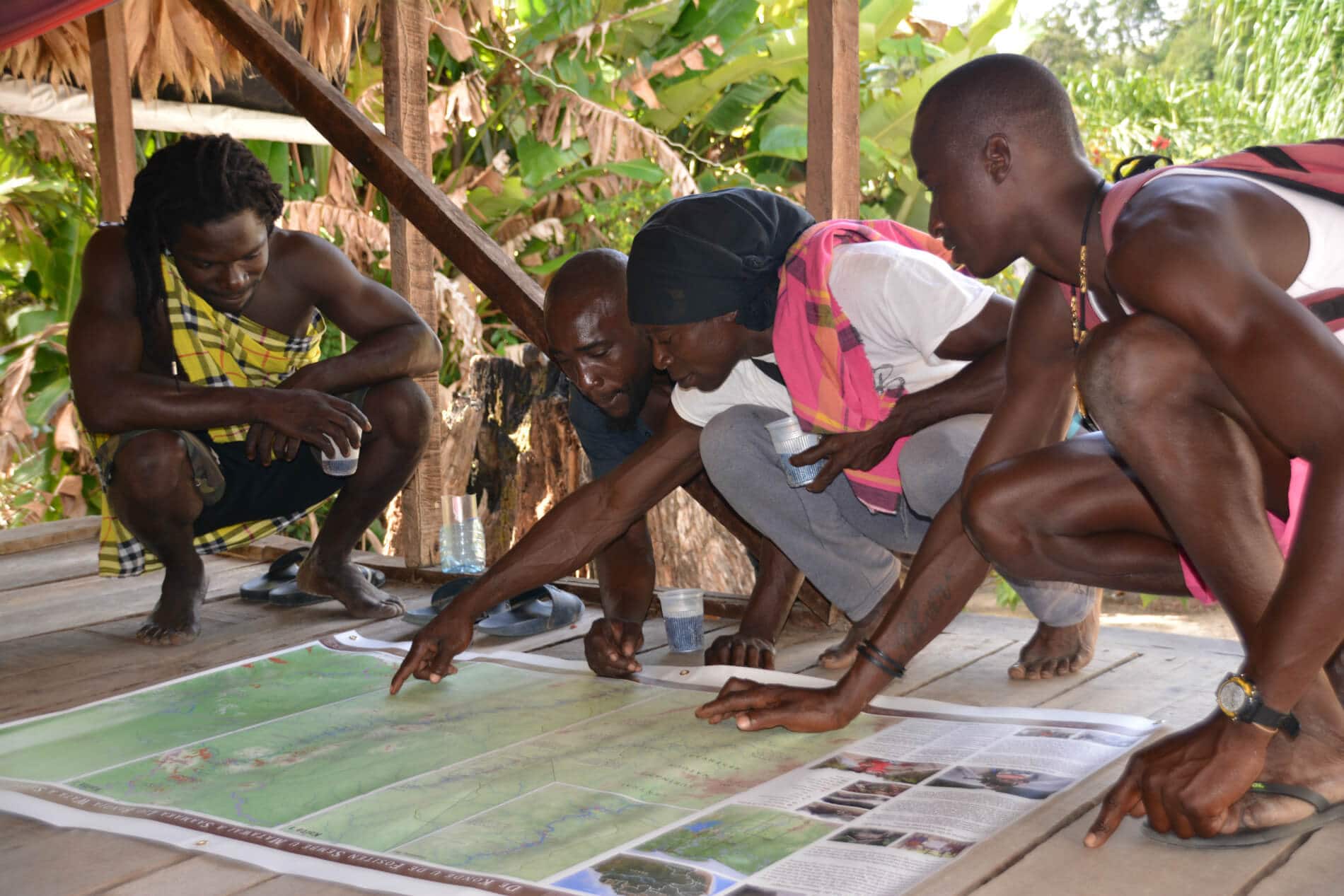 The members of these communities, today known as Maroons, proudly describe the first days their ancestors settled in and fought for what is now their traditional homeland. For many commentators, their extraordinary history is among the most distinctive and fascinating in the wide range of African-American diaspora experiences.

One of the smallest Maroon groups are the Matawai, who reside along the banks of the Saramacca River in central Suriname. For the Matawai, survival in the rainforest has always depended on an intimate knowledge of their territory, passed down by their ancestors. Place-based stories help them determine where food or resources are located, or where dangers lie hidden. Most importantly, the oral histories reinforce their historical and cultural connection to their homelands, which in turn informs their collective identity and encourages them to protect their environment. 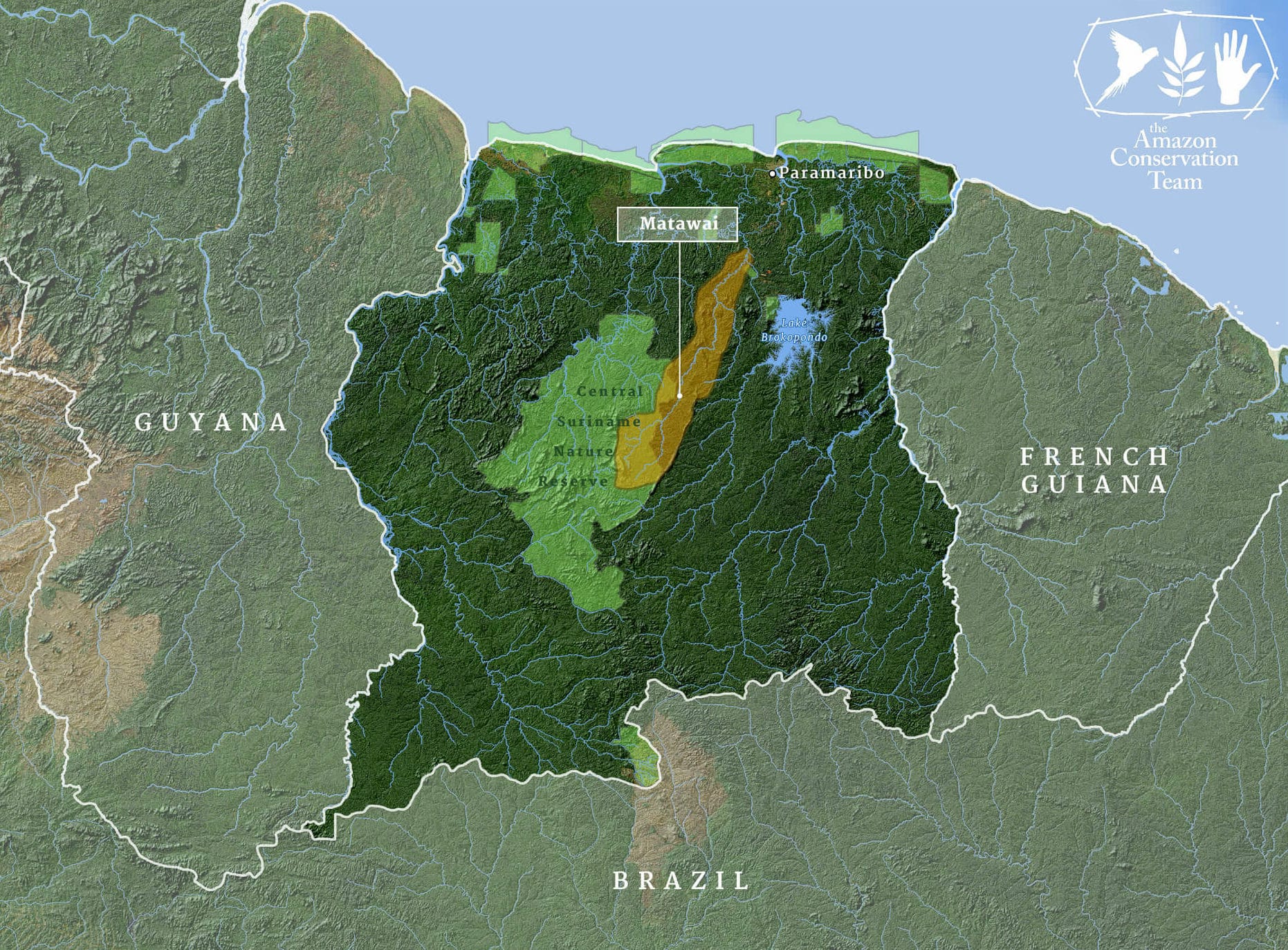 Until a few years ago, the Matawai territory was among the most remote in the country, accessible only by boat or by small aircraft. However, rampant and destructive alluvial gold mining activity, new telephone towers, and the recent creation of a network of roads servicing logging operations and connecting the twenty-one Matawai villages have brought rapid and sweeping changes.

In this changing landscape, younger Matawai are increasingly finding employment in the gold mines or leaving to go work and live a more modern life in the capital city of Paramaribo. 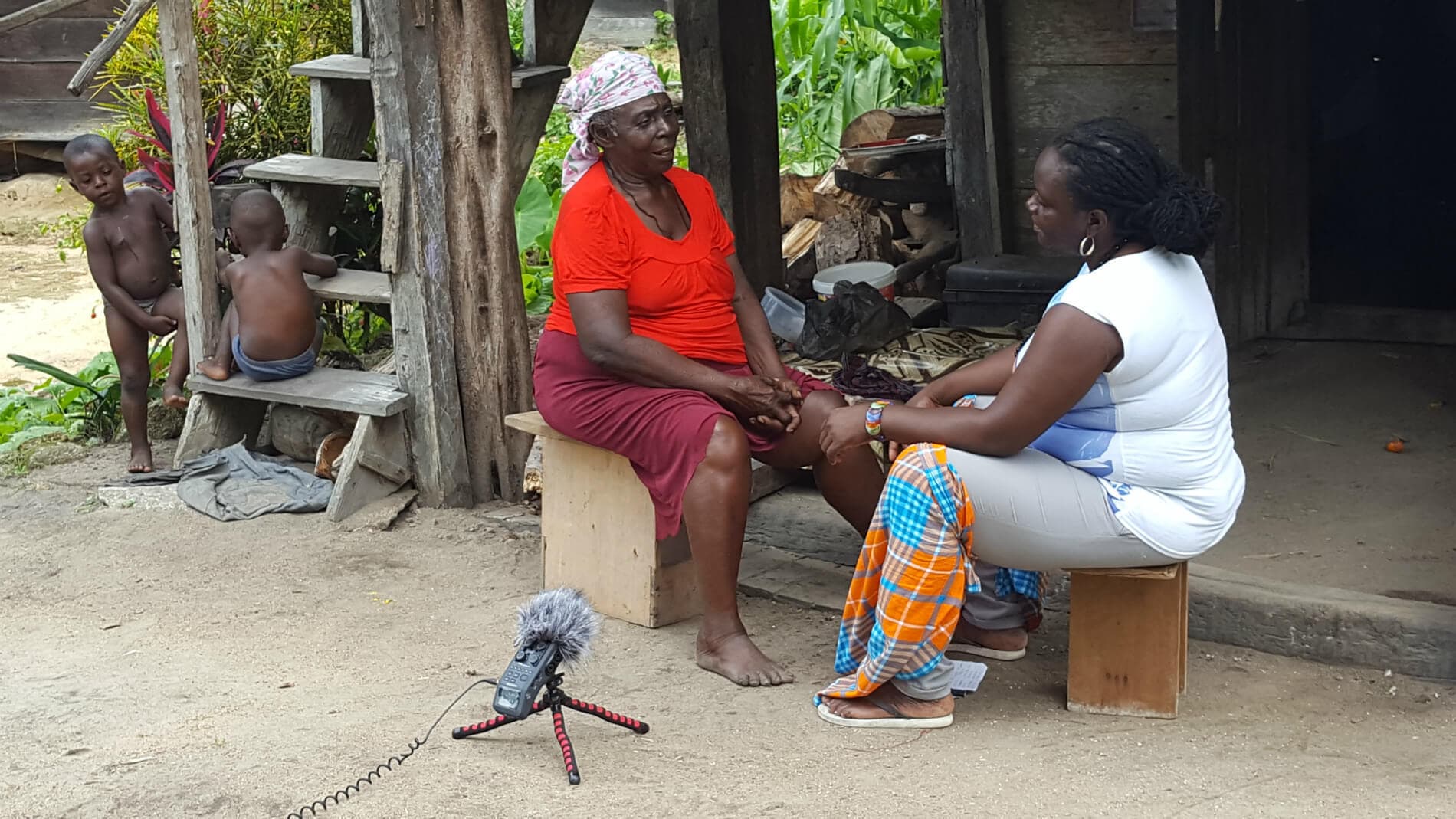 Many Matawai villages have an empty or desolate aura to them, with only a few Matawai continuing to live in a traditional way. The remaining elders frequently lament that the youth are more interested in their phones than they are in their stories, and have stopped sharing their narratives entirely. Consequently, the longstanding Matawai oral tradition of sitting around and sharing stories of the “first times” risks being lost in time.

To prevent that from happening, the local community-based organization Stichting voor Dorpsontwikkeling Matawai has spent the last few years documenting their oral storytelling traditions using video recorders and interactive maps. With support from the Amazon Conservation Team (ACT), the organization trained younger Matawai to record and interview their elders about the numerous named places and sites in their ancestral lands.

To date, the initiative has yielded over 17 hours of footage covering more than 150 historically significant places along the Saramacca River. For a number of the young Matawai involved in the project, it has brought them their first real opportunity to hear any oral history about their homelands.

For the Matawai elder Josef Dennert, the project made him realize that his “… inner wiseman had been sleeping all this time, but then I realized it was not too late. I had to follow them and finally apply my knowledge.” 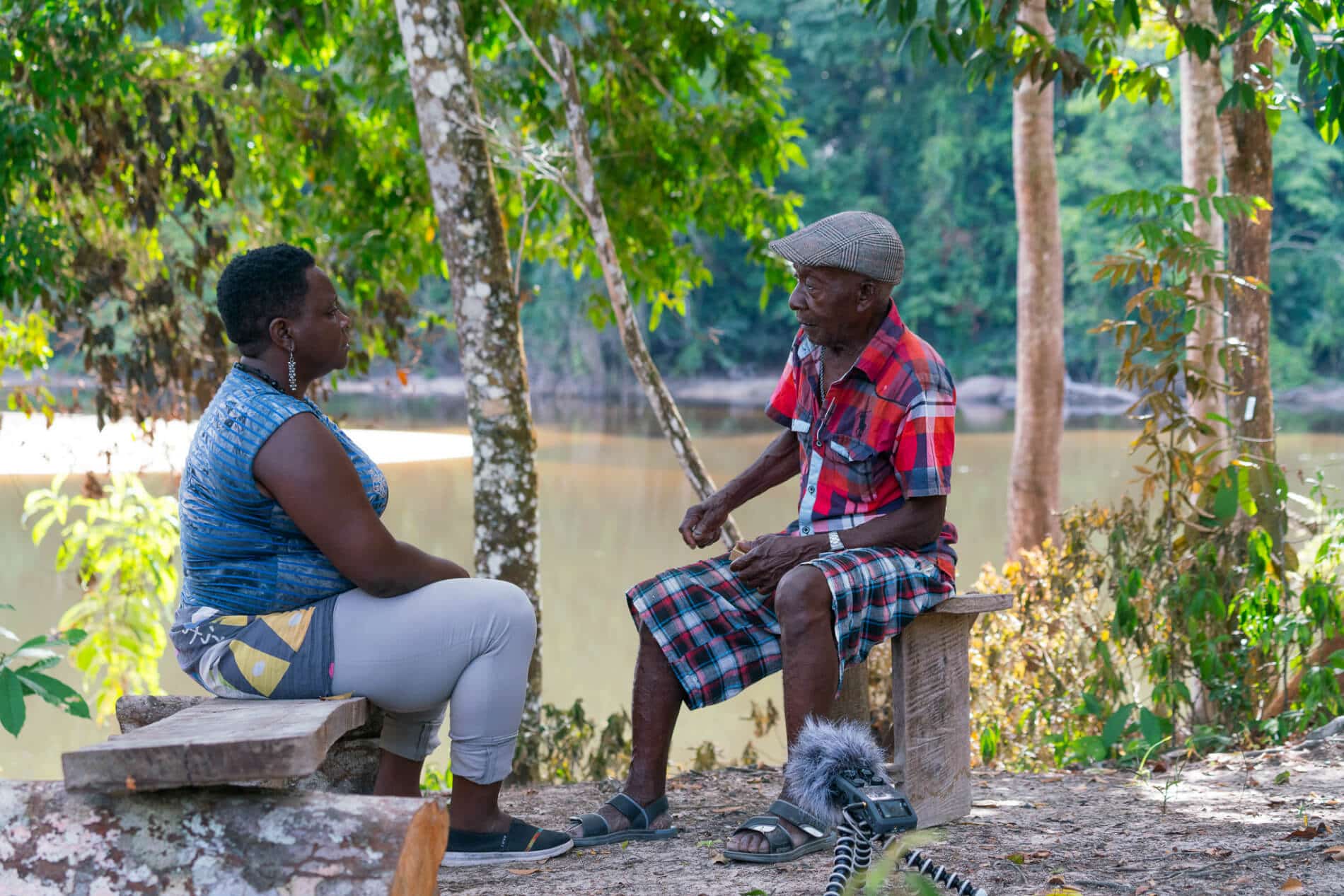 The effort to document and preserve the community’s oral histories has led the Matawai to seek out support from a number of institutions—some very far removed from their homelands. In September 2018, Dennert, along with two other Matawai, traveled to Washington, DC to research the papers of Edward C. Green at the Smithsonian Institution.

Green, an anthropologist, amassed a collection of field notes, photographs, and audio recordings captured during his time with the Matawai in the early 1970s–all of which were recently donated to the Smithsonian’s National Anthropological Archives. Sponsored by the Smithsonian Institution’s Recovering Voices Program, the three Matawai researchers were able to access these invaluable historical materials for the first time, and were permitted to take back copies to share with the rest of their community. 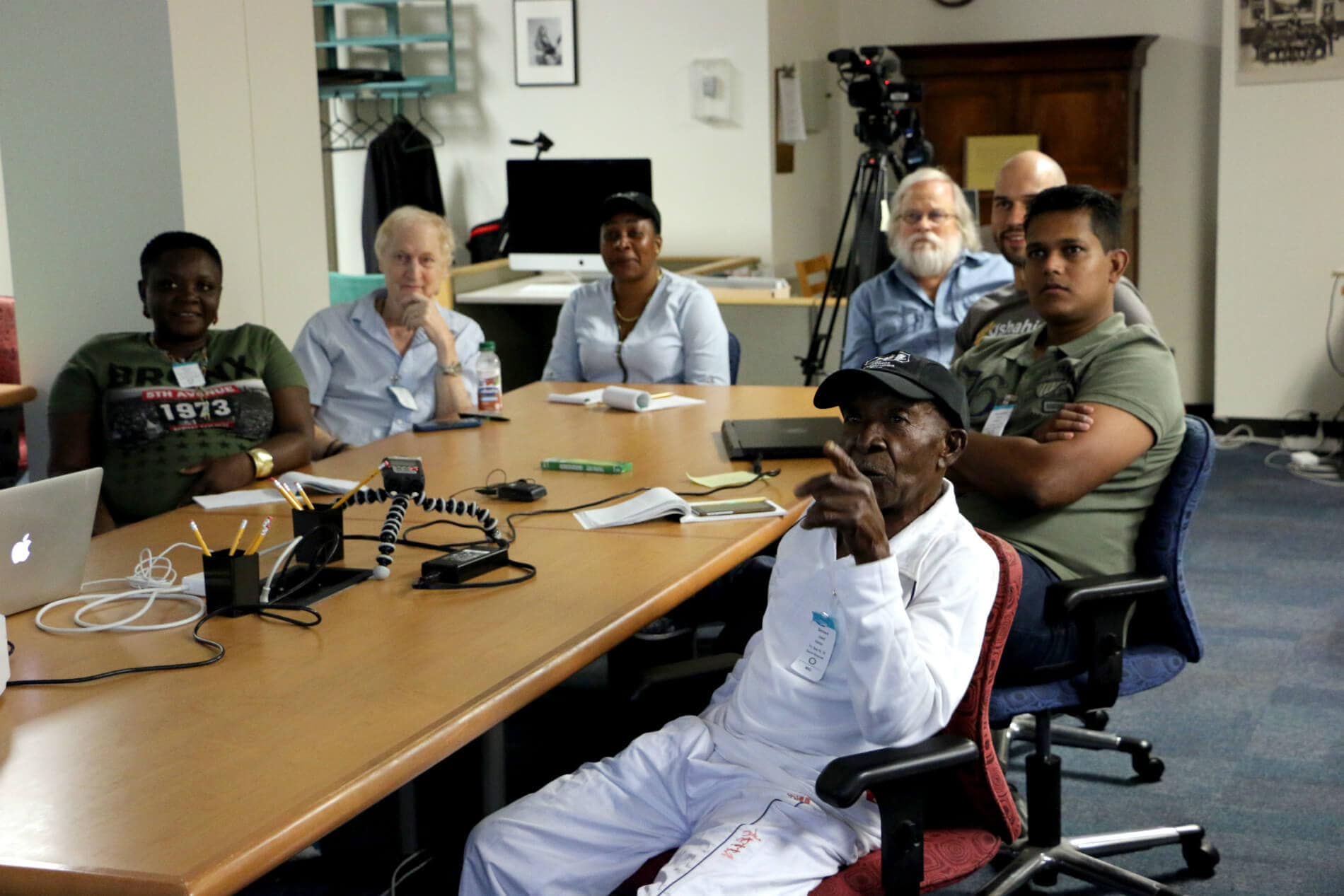 At the end of the experience, basja (traditional leader) and research participant Tina Henkie reflected on the process: “These anthropologists wrote things down, while my people back then couldn’t write. But they told stories, and then the anthropologists recorded them. And now that the people aren’t with us anymore, we should be able to find the story somewhere. And that is what we’re doing now here at this archive; I try to imagine how my ancestors lived back then. And that gives me a feeling of pride to be a Matawai, because it helps me know my roots.”

To enable hosting of the recordings of oral histories, and linking of the histories to maps of the ancestral homelands, ACT collaborated with the mapping tech company Mapbox and Ruby for Good, a team of volunteer developers, together building a novel geostorytelling application called Terrastories.

The application interface consists of an interactive map and a sidebar with media content and stories. Using a content management system, the Matawai can add places and stories, and make decisions about designating certain stories as private or restricted. Terrastories works without internet access, and the code is open-source so that any community in the world can adapt it to map their own place-based storytelling traditions.

In October 2018, in Paramaribo, Stichting voor Dorpsontwikkeling Matawai and ACT presented a version of Terrastories fully populated with all of the Matawai stories and maps before an audience of Maroon community members, traditional leaders, and Surinamese government officials. The project has spurred a national conversation around recognizing and protecting the Surinamese Maroon culture as intangible cultural heritage.

The value of obtaining recognition as intangible cultural heritage would be immeasurable; especially with the Amazon rainforest increasingly at threat by skyrocketing deforestation and Brazil choosing to follow the lead of the United States by electing a climate change denying government in favor of abolishing indigenous lands.

As UNESCO observes, “The importance of intangible cultural heritage is not [just] the cultural manifestation itself, but rather the wealth of knowledge and skills that is transmitted through it from one generation to the next.” Such knowledge often includes an understanding of the value of intact forest landscapes and how to successfully adapt to a changing environment—something that is essential for states to consider in their development of effective climate change policy. 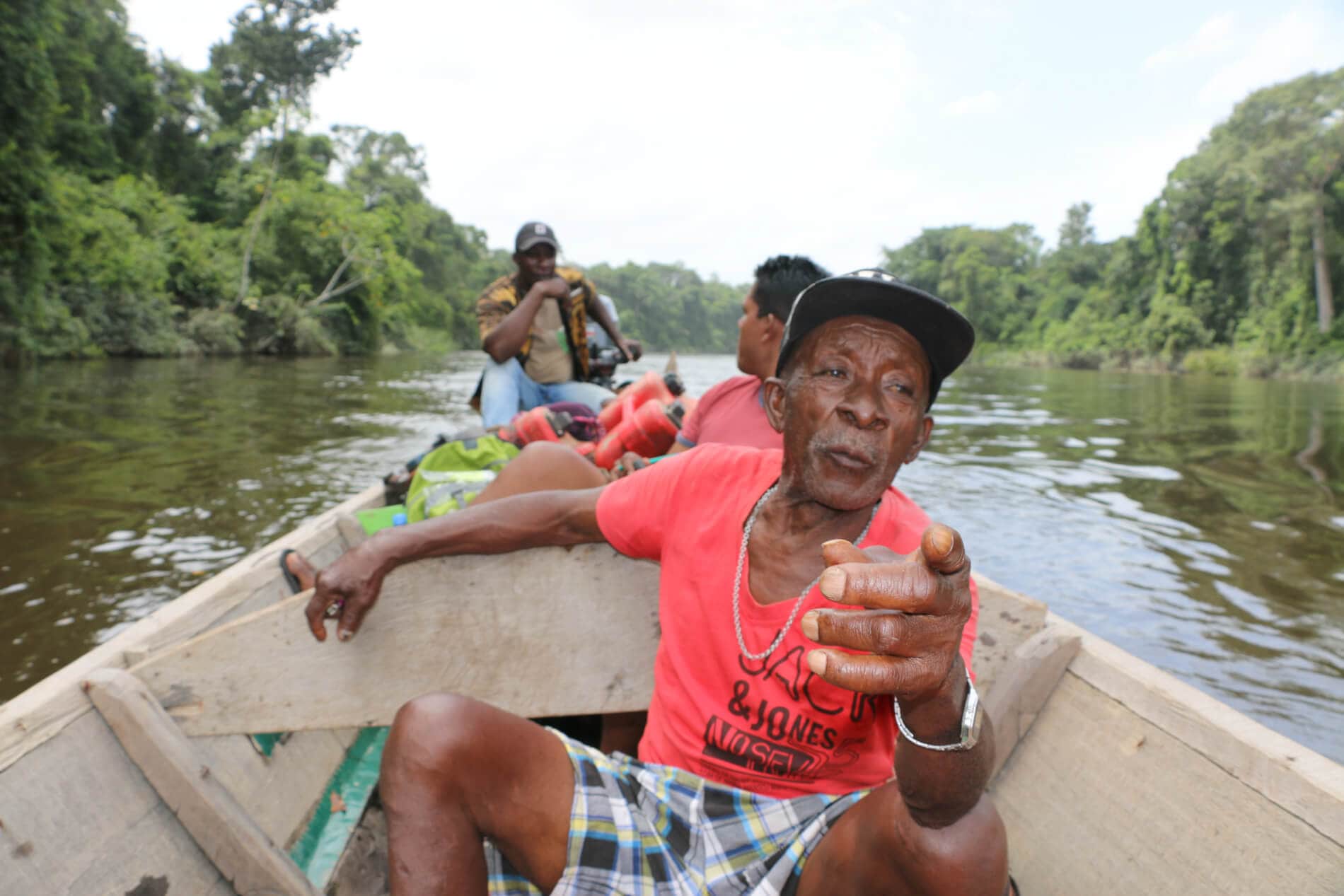 Matawai elder Josef Dennert pointing out an important site along the Saramacca River during a mapping expedition. Credit: Rudo Kemper

Research has also demonstrated that storytelling empowers indigenous peoples to conserve their own environments. In essence, the continued cultural resilience of communities like the Matawai benefits us all.

Rudo Kemper (@rudokemper) is a geographer with the Amazon Conservation Team who specializes in participatory mapping and data collection with forest communities in Suriname and other Amazonian countries.