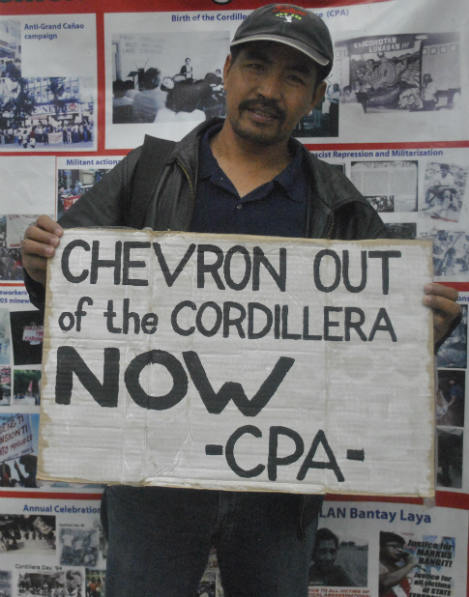 The concept of renewable energy can be deceptive. Power facilities that tap renewable sources of energy – geothermal, hydro, wind, and the like – are often believed to generate little or no adverse impact on the environment or on the people who live in the areas where these facilities are installed. But large hydroelectric dams are renewable energy facilities. And the construction of large dams has already displaced at least 40 million people worldwide (World Commission on Dams 2000). Among those who have been displaced by large dams are indigenous peoples of the Agno river valley in the Cordillera region of northern Philippines. Their experience shows that if undertaken on too large a scale, with only state and corporate interests in mind, and with no regard for the land or the people they affect, renewable energy projects can destroy lives.

Globally, people are campaigning against continued reliance on fossil fuels for energy since these are the main source of the greenhouse gas emissions that account for the climate crisis. However, big business is now capitalizing on popular advocacy of renewable energy to devise profitable projects that appear to be environment-friendly but will, in truth, impact heavily on ecosystems and on the communities that live within these.

In the Philippines, the legal framework for profiting on renewable energy is provided by the Electrical Power Industry Reform Act of 2001 (EPIRA) and the Renewable Energy Act of 2008 (REA). The EPIRA handed over power generation, transmission, and distribution from state-owned to capitalist-owned corporations, put the supply of electricity on the commodities market, and deregulated pricing by producers as well as distributors. The REA provided fiscal guarantees of high returns on investments in renewable energy projects.

Twelve years after the passage of the EPIRA, Filipinos are burdened with expensive electricity. The Philippines’ Department of Energy admits that the country ranks second to Japan in having the highest priced electricity in Asia, averaging PhP 9.70 per kilowatt hour or USD 0.22/kWh, up from USD 0.08/kWh in 2001. Power generation is dominated by old names in Philippine business – San Miguel, Aboitiz, Lopez, Ayala – plus the world leader in geothermals, Chevron. Transmission is the monopoly of, Henry Sy, owner of a nationwide chain of mega-malls. Only distribution remains unconcentrated. This is in the hands of provincial cooperatives. But they are price-takers. Their members, the ordinary consumers, shoulder the brunt of the privatization of the energy industry and the deregulation of power rates. As its price continues to rise, electricity is becoming unaffordable for the poor and marginalized sectors, such as indigenous peoples.

Five years after the passage of the REA, local governments and indigenous peoples have to put up with the importunate efforts of corporate representatives and state officials to cajole, bribe, or pressure them into accepting a plethora of renewable energy projects. As of 30 August 2013, the Department of Energy had accepted a total of 588 applications for such projects, with a combined capacity of 11,900 megawatts. The current system capacity of the country’s electrical power industry is already 11,449 MW. The current peak demand is only 9,526 MW and is projected to rise to only 12,394 MW by 2022. Need is clearly not the reason for the projects. Rather, it is the prospect of profit.

THE CORDILLERA: A SOURCE OF RENEWABLE ENERGY

The Cordillera region has a population of 1.7 million (2010 Census), the majority of which is comprised by indigenous peoples belonging to at least eight ethno-linguistic groups, collectively known as Igorot (literally, those of the mountains). As indigenous peoples, integrated in our ways of life is stewardship and protection of the land and all the natural resources it holds for the enjoyment of future generations. However, the state and big business have long considered the Cordillera as a resource base for the development of the mineral, logging, and power industries, and disregarded the fact that it is our homeland.

Nationwide, the Cordillera region has the highest energy resource potential, estimated at 3,586 MW, 27% of the country’s potential. The region hosts the headwaters of 13 major river systems, and supplies irrigation to Central Luzon, the Ilocos region, and parts of the Cagayan region. It is the watershed cradle of Northern Luzon, playing a key role in maintaining ecological balance in northern Philippines. Its rivers and creeks have been attracting corporate investments in hydropower since the late 1940s. Apart from hydroelectricity, renewable energy potentials include geothermal, wind, and solar power.

In the government’s Regional Development Plan (2011-2016), harnessing the energy potentials of the Cordillera is among the key priorities. As of 30 August 2013, the Department of Energy had already awarded one wind, seven geothermal, and 43 hydro power projects to various corporations, and was processing 60 more hydropower applications. The Department’s list of projects does not include one large multi-purpose dam that another government agency, the National Irrigation Administration, intends to build in the town of Natonin, Mountain Province. It also does not yet reflect ongoing studies for the feasibility of building two more large dams in the neighboring town of Barlig. These would raise the total number of hydropower projects to 106. The National Commission on Indigenous Peoples (NCIP) is still trying to secure the free and prior informed consent (FPIC) of the affected communities to most of the aforesaid projects.

At present, the 17 operational hydroelectric facilities in the Cordillera region have an installed capacity of more than 660 MW and a dependable capacity of more than 318 MW. Additional hydropower potential is placed at 1,259 MW, and geothermal resource potential at 510 MW. However, the annual energy peak demand in the region is only 107.5 MW. The region’s energy production goes straight to the Luzon power grid. And not all the villages of the region’s indigenous peoples are supplied with electricity from this grid. In fact, it took almost 50 years before electricity from the grid was finally channeled to households living in the vicinity of the first hydropower dams built in the Cordillera, on the Agno river, at Ambuklao in Bokod and Binga in Itogon, Benguet province. As of 2007, only 89.45% of Cordillera households enjoyed electricity.

Chevron, the notorious US-owned firm, is among the numerous corporations that aim to operate renewable energy projects in the region. Its geothermal energy project in the province of Kalinga, targeted for full operation by 2018, covers 25,682 hectares. Its two other geothermal prospects cover approximately 76,000 hectares in Benguet, Ifugao, and the Mountain Province. Another major firm is Aboitiz, which has partnered with SN Power of Norway, and now owns the Ambuklao and Binga dams, plus a dozen smaller hydro facilities. Aboitiz has 33 hydropower projects. Other companies with renewable energy projects in the region include the Ayala subsidiary Quadriver, Henry Sy’s APC Group of Companies, Sta. Clara, Pan-Pacific, AsiaPac, Southeast Asia Renewable Energy, Basic Energy, AVG Power Systems, Clean Rock, PhilCarbon, and Chevron’s longtime partner, the Philippine National Oil Company Renewables Corporation.

Foreign and local corporations are raking in profit from energy projects as guaranteed by the EPIRA and the REA. Indigenous peoples do not benefit from these capitalist projects. Instead, we have to cope with rising electricity prices, adding insult to the injuries our communities have suffered as a result of the impact of the energy projects on our environment, livelihood, and ways of life. There are still communities in the Cordillera that need electricity, but the existing hydropower facilities that generate massive amounts of energy are not providing this.

The state’s promotion of corporate renewable energy projects in the Cordillera has entailed numerous violations of our rights as indigenous peoples to ancestral domain and self-determination. Mega-dams built despite our protests have already displaced hundreds of families of indigenous peoples. Putting up 106 more hydropower facilities will seriously disrupt our livelihood, which includes irrigated farming and freshwater fishing. Drilling for geothermal energy in our heavily mineralized region will aggravate environmental pollution and health problems, which we are already experiencing from large mining operations.

As indigenous peoples, we are guaranteed the right to free and prior informed consent regarding all projects that might impact on our ancestral domains. The National Commission on Indigenous Peoples is mandated to facilitate the FPIC process while ensuring that this is conducted properly. However, in the processing of renewable energy projects, the NCIP has colluded with the Department of Energy and the corporations to maneuver around our communities’ opposition and railroad the building of so-called consensus in favor of the projects. In relation to Chevron’s Kalinga project, the NCIP fabricated a bogus resolution of FPIC in the name of the Dananao tribe. In relation to one large dam project, also in Kalinga, the NCIP would have let one corporation get away with fabricating the existence of a new, distinct tribe, were it not for the vigilance of a local peasant organization. And in relation to a set of small hydro projects in Ifugao, it allowed public officials to use the military’s presence in the area to intimidate the local citizens into voting for “FPIC”. Also, the NCIP has adopted guidelines which allow corporations to apply for FPIC again and again when communities persistently refuse their projects. The NCIP has thus disrespected our peoples and violated our right to self-determination.

Most of our communities who are affected by renewable energy projects oppose them because these bear ethnocidal impacts or threaten our survival as persons and as peoples:

We do not need state-fostered, capitalist-driven renewable energy projects. We have proven that community-managed renewable energy projects are able to provide for our electricity needs. For nearly three decades now, many of our communities have gotten their electricity from micro-hydro plants, pico-hydro turbines, and photo-voltaic plates which they themselves have installed and managed. Besides supplying them with electricity, the micro-hydros also provide mechanical energy for rice and corn mills.

For energy development – indeed, for economic development as a whole – to become viable and sustainable in our indigenous peoples’ territories, it must be underpinned by the recognition and respect of our collective rights to ancestral domain, to self-determination, and to basic survival as human beings. Rather than be geared towards satisfying capitalist greed, it should address our practical needs. Rather than consist of a chaos of projects, it should be comprised of a rationally and carefully outlined program in resource utilization and management. It should be a program in responsible stewardship of nature, undertaken for the welfare and interest not only of the present but also of future generations. Consistent with our peoples’ traditions in cooperativism, and in resource and benefit sharing, the ownership as well as operation of facilities should be socialized rather than privatized, and gains should be distributed equitably among the members of society.

Our Present Demands
We, indigenous peoples of the Cordillera, collectively demand the full recognition of our right to ancestral domain and self-determination. Uphold the UN Declaration on the Rights of Indigenous Peoples (UNDRIP) and other international agreements and declarations that recognize and guarantee indigenous peoples’ rights and basic human rights!

We demand that the Philippine government, especially the National Commission on Indigenous Peoples and the Department of Energy, ensure the following, and that private corporations do similarly:

How You Can Help

We urge indigenous peoples’ organizations, people’s movements, indigenous rights and human rights advocates, other individuals, and institutions to support the Cordillera peoples’ struggle against destructive capitalist renewable energy projects. We enjoin you to support our activities:

We encourage you to write letters of concern to: