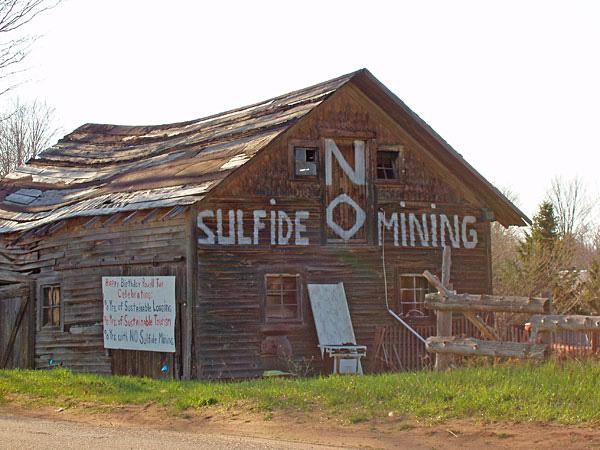 The state of Michigan on Friday handed a huge defeat to Indigenous People, environmental groups and others who have actively opposed a controversial sulfide mine that the Kennecott Minerals Company – an international mining company with one of the worst environmental records in the world – wants to build in the pristine Yellow Dog Plains near Lake Superior.

Kennecott plans to tunnel below a prime trout stream (the Salmon-Trout River – that feeds Lake Superior) and use an acid-leaching process to extract nickel and other minerals – leaving in its place hundreds of thousands of tons of acid-leached waste rock (sulfuric acid, aka battery acid).

It’s readily possible the mine will cause the river to collapse into the mine, thus polluting Lake Superior and possibly all the Great Lakes. Legally speaking, this should have been enough to deny the mine, but this issue was deliberately-I mean accidentally omitted from the report reviewed by the State. They were however made aware of it before making their final decision, but quite clearly chose to favor the short-term economic benefits over the possible and definite long-term environmental damage.

On top of that, the area of the mine is ceded territory for the Keweenaw Bay Band of Chippewa (KBIC). The treaties of 1842 and 1856 give the KBIC priority right to gather, hunt, and fish in the area. Michigan State’s decision ignores these rights. And with the mine set to begin as soon as the coming spring, Kennecott will physically trample on them.

KBIC has been continuously opposed to the mine because of this fact. “Our tribal cultural committee has been very involved with it (Eagle Project) and we’re going to continue to do what we can (to halt it),” KBIC President/CEO Susan LaFernier told the daily Mining Gazette of Houghton, MI.

This position is likewise held by all the opposition to the mine, which also includes the Huron Mountain Club, Landowners Opposed to Sulfide Mining, Michigan Environmental Council, Michigan League of Conservation Voters, National Wildlife Federation, Sierra Club, Students Against Sulfide Mining, Yellow Dog Watershed Preserve, Save the Wild UP, and a host of other ad hoc groups throughout the region.

Following the decision, six of these groups issued a joint statement announcing the fight is not over.

“We are extremely disappointed that after all the work which went into crafting the law governing non-ferrous mining in Michigan that the DEQ has chosen to simply ignore key components of that law. They’ve granted Kennecott a permit which clearly doesn’t even meet the intent, let alone the letter of the law,” stated Anne Woiwode, state director of the Sierra Club Michigan Chapter.

National Wildlife Federation attorney Michelle Halley said she and other opponents are currently considering a variety of administrative and court actions. “We need time to review the final permit conditions and will proceed after that,” she explained.

Save the Wild UP, the grassroots group that has vocally opposed the project, believes the state has sold out the people of the Upper Peninsula.

“DEQ has made a charade of listening to the public. Governor Granholm seems willing to hold her nose and allow the inevitable nasty pollution of the U.P. and the Great Lakes,” said Dick Huey, co-founder of Save the Wild UP.

While the mining company gained MDEQ approval [on Friday], the project still has several hurdles to clear, including at least one federal permit required by the U.S. Environmental Protection Agency and permission from the Michigan Department of Natural Resources.

For news, information, and to learn how you can help, please visit http://www.savethewildup.org