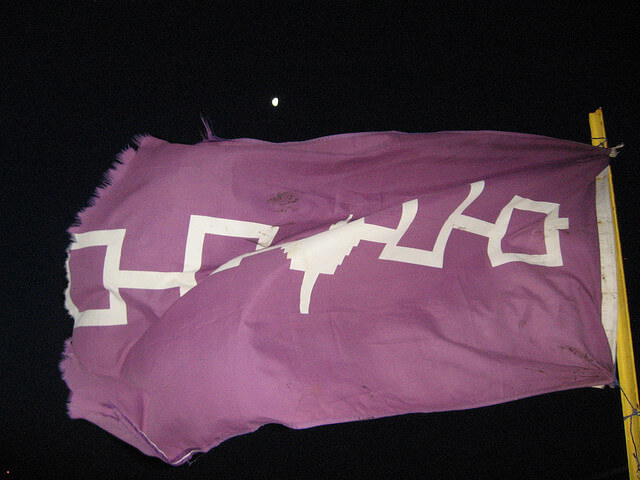 A Strange and Historical Bad Land Claims Settlement for the Mohawks

The May 30 announcement by the St. Regis Tribal Council that it had reached a “settlement” with New York State is one of the strangest in Native land claims history.

The settlement begins with a bold lie: that of the three Mohawk governing councils at Akwesasne, this most factionalized of Native communities, one-the New York State created St. Regis Tribal Council -has decided that it would unilaterally bring a “forever” end to all Mohawk claims against the US and the State without consultation, consensus or approval of the Mohawk Nation Council or the Canadian based Mohawk Council of Akwesasne.

Never mind that there are over 40,000 Mohawks living on seven territories: Ganienkeh, Kanesatake, Kahnawake, Tyendinaga, Wahta, Ohsweken and Akwesasne and none of them, with the exception of a few Tribal officials, knew anything about the agreement. Their opinions were never solicited nor is there any provision for their approval in a settlement which wipes out their valid claims against the US and New York for the blatant theft of over 9,000,000 acres of aboriginal Mohawk territory and the forcible removal of their ancestors from our homelands.

That the Tribal Council would assume it has the authority, never given, to represent all Mohawks on this most vital and delicate of issues is nothing short of pure arrogance without basis in history or fact.

Yet New York State will go ahead and enter into the settlement since it maintains that a single signature by any governing agency located on Mohawk territory is sufficient to extinguish all Mohawk claims which was its exact position in 1797 when Joseph Brant betrayed all Mohawks by unilaterally signing away our native lands when it was abundantly clear to the Americans that he had no such authority.

Since then the Mohawks have lived on restricted reservations, confined at times by force of arms by a vindictive New York which has taken a hostile, active role in opposing the unification of the Mohawks on any issue particularly land and jurisdiction. Hence, the creation of the St. Regis Tribal Council in 1892 by the State Legislature and the pouring of millions of dollars in support to that colonial entity.

It is therefore no surprise that a State agency, the Tribe, would be given the power by the US to once again cede all of Mohawk lands for less than a pittance and a weird pittance it is.

In the May agreement, the Tribe agrees to the following:

As is well known, and elementary, in any negotiation that what is not expressly cited is considered excluded. So the Tribe, in another strange decision, decided not to protect Mohawk jurisdiction or freedom from external taxation. The Tribe made no mention of the vital trade and commerce issues nor did it exempt itself from the criminal or civil laws of either county or state.

It is hard to see what exactly benefits the Tribe in this very bad agreement. The Tribe may get 3,000 plus acres of land but only under highly restrictive conditions. It gets $2,000,000 a year from the NYPA but must immediately pay that back in hydro fees. If New York, the real culprit, gives anything at all it is from money the Tribe gives to the state under the provisions of the National Indian Gaming Act.

So the odd, disturbing and outright bad agreement awaits the signature of a Tribal official. But which one of the three “trustees” would sign such a deplorable agreement when it provokes more internal dissension and will spark years of litigation?

Which trustee will sign away the birthright of all Mohawks and wipe out the seventh generation? And which one will be condemned by history for doing so?

Download: Memorandum of Understanding between the County of St. Lawrence, the Saint Regis Mohawk Tribe and the State of New York (PDF)