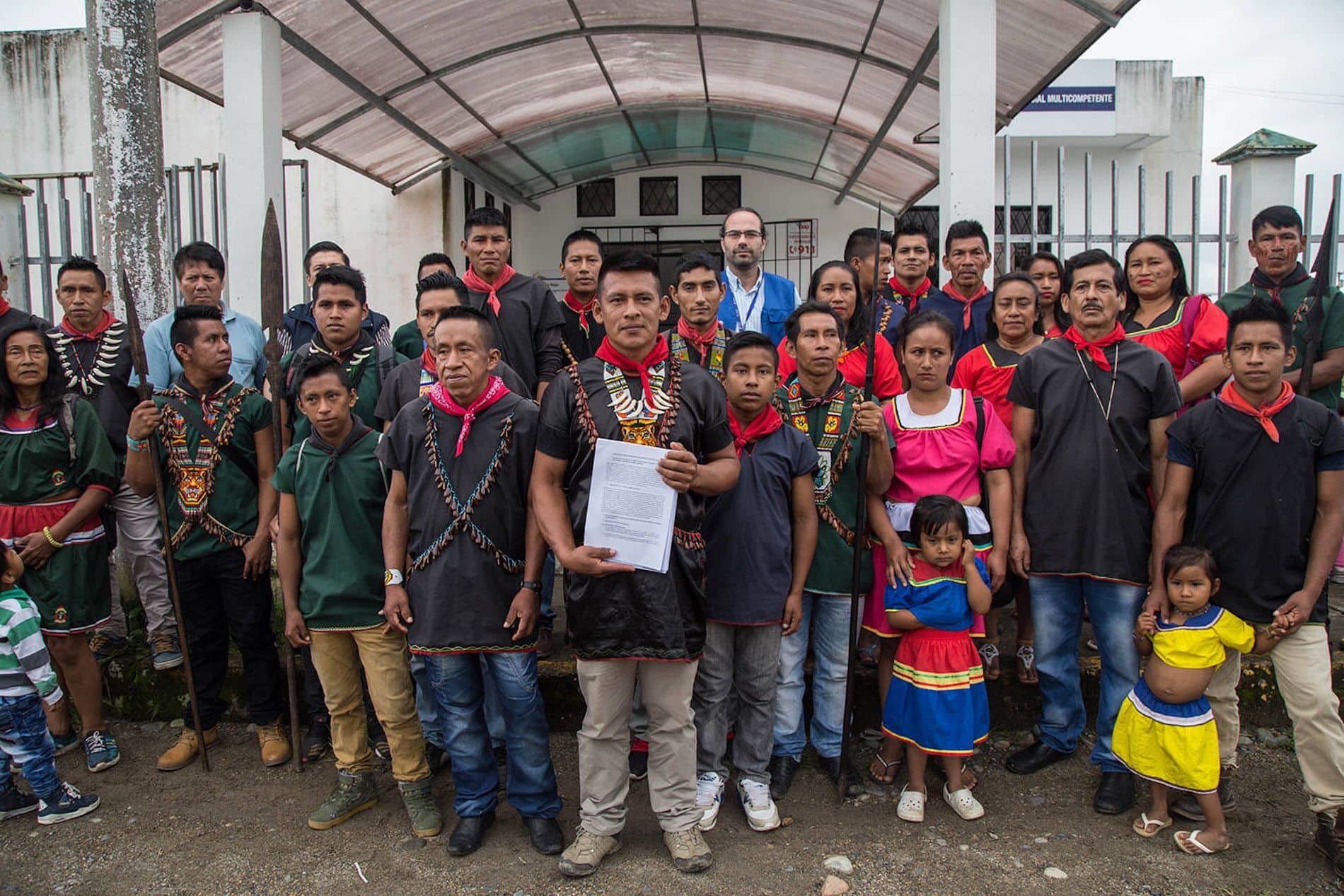 Stopping a gold rush in the Amazon: 7 reasons why the Kofan landmark victory is so huge

The Kofan people of Sinangoe have succeeded in building strong ties with allies both nationally and internationally, helping them gain leverage in this fight against the Ecuadorian government.
Support our journalism. Become a Patron!

Facing the mounting pressures of the global race for gold and other metals across the globe, it’s not everyday that a small indigenous community wins a lawsuit against the government that nullifies over 50 mining concessions threatening their health and land, and grants full restoration of the damages done. Last week’s landmark victory for the Kofan people of Sinangoe, at the headwaters of the Aguarico River in the Ecuadorian Amazon, is testament to the importance of indigenous-led resistance against extractivism in the world’s largest tropical rainforest.

This community’s path to victory involved a myriad of strategies ranging from environmental monitoring to innovative legal actions and alliance-building with civil society, provincial governments and international organizations. Its example should provide inspiration and tools to other indigenous peoples facing similar threats to their ancestral lands, cultures and rights. Here are 7 major reasons why Sinangoe’s case is so important.

1. It safeguards the ancestral Kofan way of life

Kofan culture is deeply connected to the land: their entire way of life depends upon the rivers and forest. When the Kofan discovered that their ancestral territory along the Cofanes and upper Aguarico rivers had been granted to mining companies without their permission, they immediately recognized the gravity of this threat to their way of life and autonomy, and to other communities downriver. Damage to these rivers means damage to the Kofan themselves. Their triumphant legal battle, which brought four Ecuadorian State authorities to court, not only denounced the lack of consultation, but also highlighted the violation of their rights to water, food security and a clean environment – fundamental rights imperative to the integrity and survival of Kofan culture. 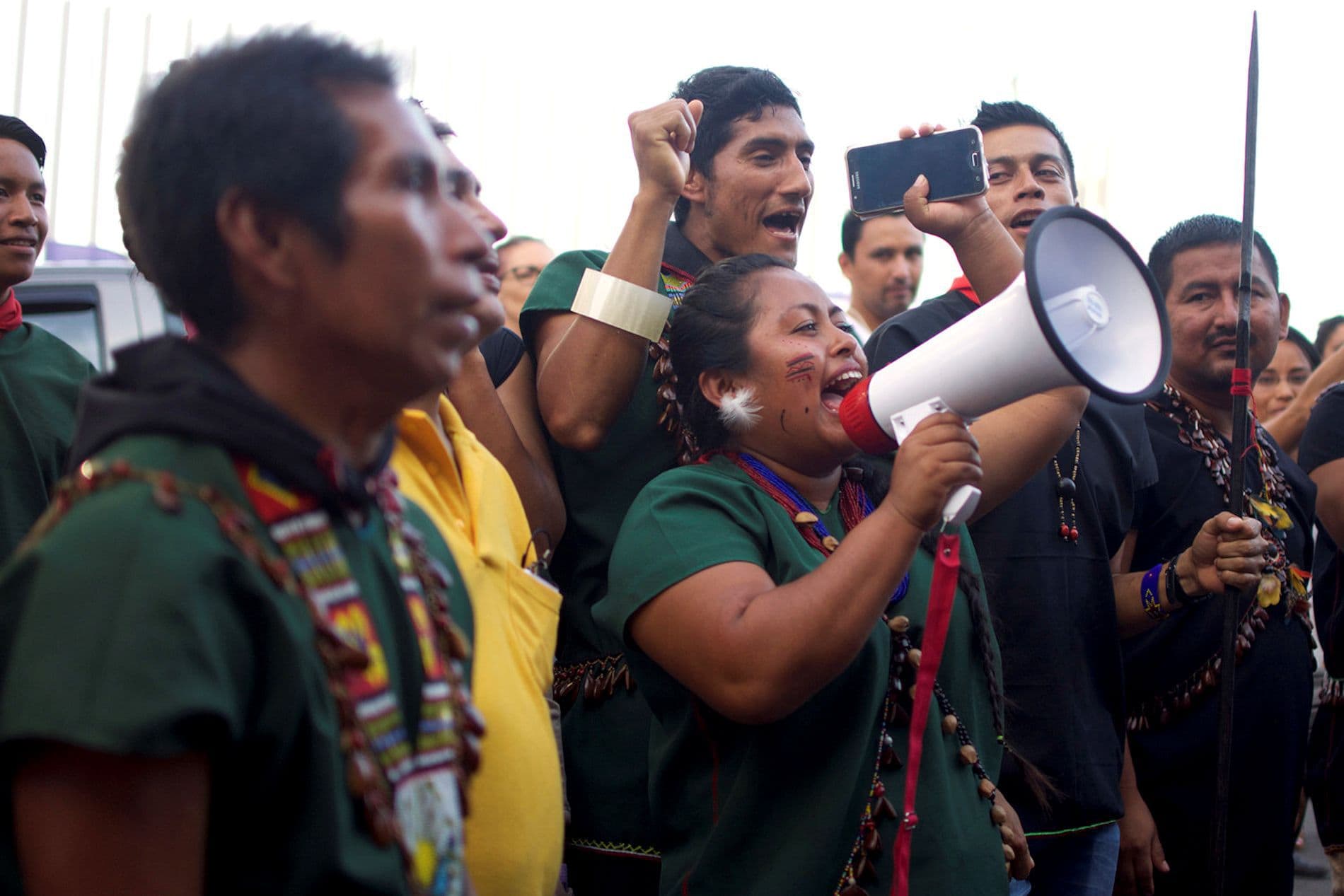 The Kofan people of Sinangoe have won a landmark legal battle to protect the headwaters of the Aguarico River, strengthening collective rights to Free, Prior and Informed Consent over any extractive activity in indigenous lands.

2. It shows the effectiveness of indigenous-led environmental monitoring

It was Sinangoe’s community land patrol that sounded the alarm when they witnessed the first machines digging up the banks of the Aguarico River in early 2018. This land patrol, trained and formed one year before in partnership with Amazon Frontlines and our indigenous partners Ceibo Alliance, immediately documented and reported the invasion. Over the course of several field trips, the land patrol meticulously built up an extensive archive of images, drone footage and maps, which played a central role in their landmark victory, providing irrefutable evidence of the environmental damages of gold mining on their land to the judges and court. This victory should embolden any community using environmental monitoring techniques, whether it be camera traps, GPS, video recorders, drone, satellite imagery and/or land patrols. 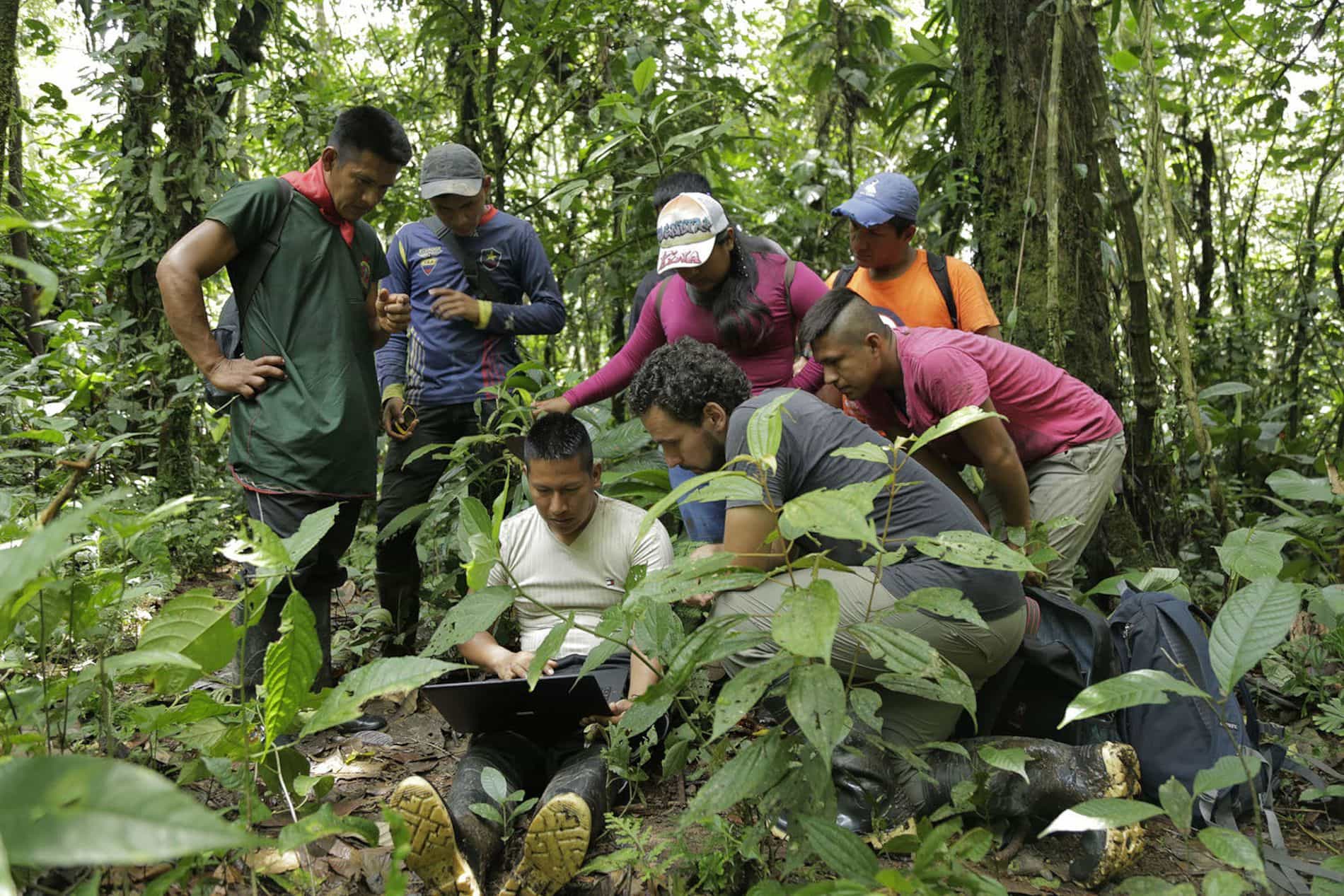 Over the course of 2 years, Sinangoe’s land patrol have used a wide range of strategies and technologies to detect, document and stop gold mining inside and around their ancestral land.

3. It sets a legal precedent for indigenous rights in Ecuador and beyond

The decision by the Provincial Court is without precedent in Ecuador, and takes huge steps towards the protection of indigenous and environmental rights. First, there is the concrete: 20 concessions improperly granted to mining companies canceled; 32 concessions under review for approval indefinitely suspended; and full remediation of damages already caused by the mining activity. But this sentence has deeper repercussions for a country with 14 indigenous nations and some of the world’s most important natural resources. The court’s recognition that the government must consult indigenous communities when the proposed activity affects their territory, even if it doesn’t occur directly on their legally recognized land, is a huge win for indigenous rights to Free, Prior and Informed Consent. Equally important is the recognition of the rights of nature, as well as the use of the precautionary principle, always applicable but seldom-applied in Ecuador, which vests the government with the responsibility to protect the public from harm (in this case to the environment and to the right to water and food security) BEFORE irreversible damage occurs unless scientific evidence can prove otherwise. The court’s decision advances the law in Ecuador, paving the way for other communities to exercise their rights and protect their territories.

4. It protects one of the most biodiverse places on Earth from rampant deforestation

By halting all mining operations along the headwaters of one of Ecuador’s most important rivers, the Kofan have saved 32,000 hectares (79 000 acres) of the most biodiverse rainforest in the country and amongst the most biologically rich places on Earth. The area, fed by the Cofanes and Chingual Rivers, is home to over 3,725 species of plants, 650 species of birds and 50 species of mammals, including various endemic and endangered species like the spectacled bear and the mountain tapir. This biological hotspot’s fragility and uniqueness mean even limited road building and small-scale deforestation could have disastrous impacts on the local flora and fauna. This legal victory affords respite for these wild places and highlights the incompatibility of mining in this pristine Amazon rainforest.

5. It contributes to the fight against the global climate crisis

As deforestation continues to spread across the Amazon, and with the Ecuadorian Amazon having already lost 675,000 hectares of pristine rainforest since 1990, protecting intact refuges like Sinangoe’s ancestral land and its rich surroundings is key to combating climate change. Each hectare of forest in this area contains between 245 to 633 tons of carbon stored in its vegetation and soils, amongst the highest carbon densities in the Amazon1. Avoiding deforestation over 32,000 hectares of this rainforest means avoiding the release of at least 7.8 million tons of carbon to the atmosphere, or the equivalent average yearly carbon emissions of more than 1.7 million cars2. 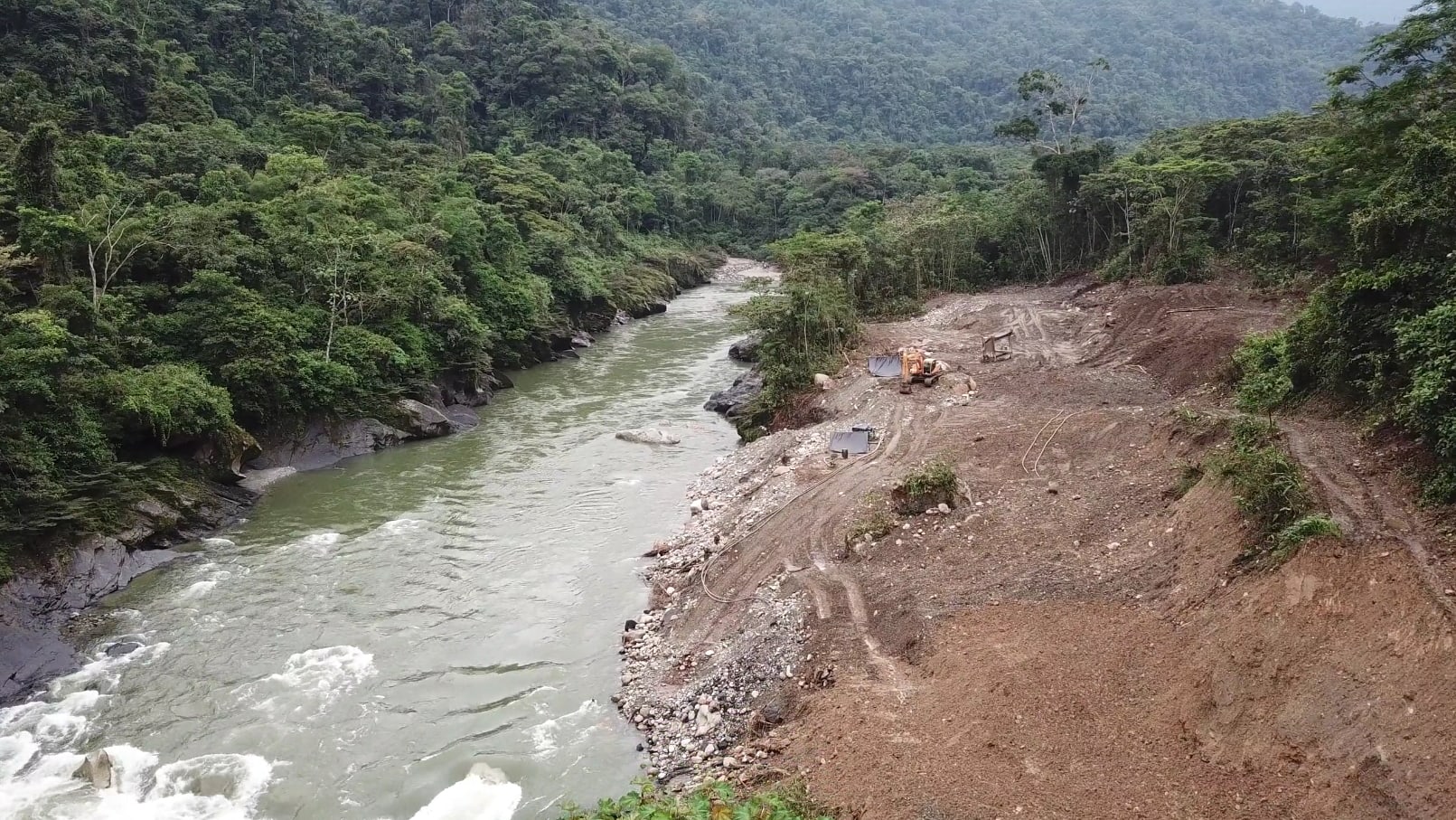 Deforestation along the banks of the Aguarico River detected by Sinangoe’s land patrol in April 2018.

6. It avoids hazardous contamination of one of the biggest rivers in Ecuador

The Ecuadorian government granting of 52 mining concessions posed a significant threat to the Aguarico river, which crosses the entire Ecuadorian Amazon, providing water to dozens of indigenous communities and to some of the largest cities of the area. Gold mining operations in the Amazon are amongst the main causes of contamination from anthropogenic mercury, a highly toxic heavy metal contaminating water sources and causing serious health impacts for all beings. Moreover, Ecuador allows the use of cyanide for gold extraction, another toxin released into rivers that can pose a serious risk to water quality and health due to its high toxicity. Following Sinangoe’s urgent request during the lawsuit, the Aguarico, Cofanes and Chingual rivers were declared protected water resources by Ecuador’s national water authority (SENAGUA), blocking any mining and any future concessions directly on the banks of these vital rivers, a first in Ecuador.

7. It demonstrates that forging cross-cultural alliances is critical to success

This legal battle would never have been possible if the people of Sinangoe didn’t value their territory, put in long, hard hours patrolling their land, and sustain unity within the community. But that alone wouldn’t have won the battle. What Sinangoe also knew to do was connect with other communities and organizations and reach out for support where needed. Over the course of Sinangoe’s battle against gold mining, over 59 national and international organizations, 14 riparian communities of the Aguarico, the provincial and municipal governments and even the highly influential Catholic Church gave their support to the community, increasing Sinangoe’s leverage and visibility. This example shows that communities in resistance are stronger when they are united, and that cross-cultural alliances work when they are based on mutual respect and trust.

The Kofan people of Sinangoe have succeeded in building strong ties with allies both nationally and internationally, helping them gain leverage in this fight against the Ecuadorian government.

This article was originally published on Amazon Frontlines. It has been re-published on IC with permission.